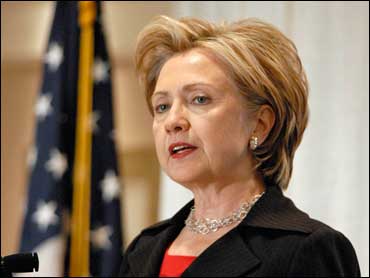 CBS News has confirmed that Sen. Hillary Clinton has decided to accept the offer to join President-elect Barack Obama's cabinet as secretary of state, according to a senior Clinton adviser.

The adviser told CBS News that Mr. Obama formally told Clinton earlier in the week the job was hers if she wanted it.

But a Clinton spokesman stressed that this is not a done deal. "We're still in discussions, which are very much on track. Any reports beyond that are premature," said Philippe Reines, a senior adviser to the New York senator.

The Associated Press reported late Saturday that Obama is planning to name former Treasury Secretary Lawrence Summers - previosly thought to be a front-runner to resume that post - as director of the National Economic Council.

Obama is expected to announce both of those economic picks, and possibly others, on Monday.

And CBS News has confirmed that New Mexico Gov. Bill Richardson had emerged as a likely pick for commerce secretary.

Elsewhere, CBS News correspondent David Martin reports that the chairman of the Joint Chiefs of Staff, Adm. Mike Mullen, met Friday for a one-on-one meeting with Obama. Mullen flew to Chicago at the invitation of Mr. Obama and the men met for about 45 minutes. Mullen refused to say what was discussed. As the president's chief military adviser, Mullen will play a key role in helping Obama make good on his campaign promise to end the war in Iraq and get all combat brigades out by July, 2010.

A more complete rundown of the emerging Obama cabined is below, based on reporting by CBS News and the Associated Press: