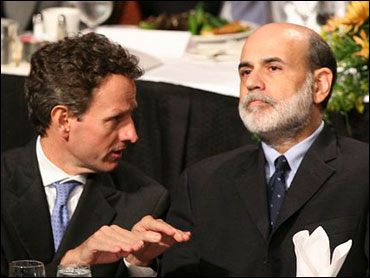 President-elect Barack Obama is likely to name Tim Geithner, president of the New York Federal reserve, to the post of treasury secretary as he rounds out the upper echelon of his Cabinet in a time of intense economic turmoil, an official close to the incoming chief executive said Friday.

Sen. Hillary Rodham Clinton, in line to become secretary of state, said through a spokesman that discussions were "very much on track" for that appointment but no final arrangement had been made.

Mr. Obama also has selected Eric Holder, a top Justice Department aide in the Clinton administration, as his attorney general.

If nominated and confirmed by the Senate, Geithner, 47, would assume chief responsibility for tackling an economic slowdown and a credit crunch that threaten to create the deepest recession in more than a generation. The president of the New York Federal Reserve, he has played a key role in the government's response to the financial crisis and has worked closely with Treasury Secretary Henry Paulson.

Separately, CBS News has confirmed that New Mexico Gov. Bill Richardson had emerged as a likely pick for commerce secretary. Like Clinton, he was a rival of Mr. Obama's for the Democratic presidential nomination last winter. He dropped out after the early contests, though, and soon threw his support behind the eventual winner.

It was not clear when Mr. Obama intended to make a formal announcement of any of his picks. He has largely stayed out of public view since his election on Nov. 4, preferring to work quietly in a suite of offices in downtown Chicago.

CBS News correspondent David Martin reports that the Chairman of the Joint Chiefs of Staff, Adm. Mike Mullen met Friday for a one-on-one meeting with Obama. Mullen flew to Chicago at the invitation of Mr. Obama and the men met for about 45 minutes. Mullen refused to say what was discussed. As the president's chief military adviser, Mullen will play a key role in helping Obama make good on his campaign promise to end the war in Iraq and get all combat brigades out by July, 2010.

While speculation has been rampant about numerous Cabinet-level appointments, there has been relatively little about Mr. Obama's choice as defense secretary. His aides encouraged speculation before the election that Robert Gates, who now holds the position, would remain in office for an interim period.

The officials who discussed Mr. Obama's plans Friday did so on condition of anonymity, saying they were not authorized to pre-empt any formal announcement.