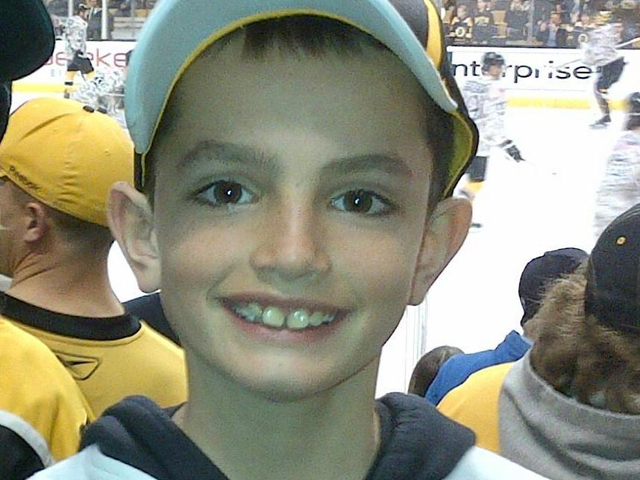 It's been a tough winter to train for a marathon. In Boston, and across the northeast, the snow covered roads and ice coated sidewalks. The wind, unrelenting, bit through layers of running gear, and seemed to always blow from the least helpful direction.

But for the members of Team MR8, as with many running this year's Boston Marathon, the tragic events of last year spurred a new sense of purpose, and power, to keep moving.

"I have unfinished business on that course," said Pat Brophy, a runner stopped with less than a mile to go last year when the two blasts turned the event deadly. This year, Brophy will run as a member of Team MR8, honoring eight-year-old Martin Richard who was killed in the terrorist attack while cheering at the finish line with his family.

For Brophy, and other runners on the team, the Richard family has become a symbol of strength.

The blasts didn't just rob Denise and Bill Richard of a son. Both were injured, and their daughter Jane, then 7, lost her left leg. The young girl's recovery, captured recently in a picture of her standing on a new prosthetic leg with a smile on her face, has served as a story of hope after the tragedy. Their oldest son Henry did not suffer physical injuries.

The family established the Martin W. Richard Charitable Foundation to honor Martin, and selected 100 applicants to serve as runners, ambassadors and fundraisers for Team MR8, a name formed combining Martin's initials with eight, his favorite number, and the age at which he passed. Members of Team MR8, the family said, are running to remember those affected by the tragedy, and to participate in symbolically reclaiming the finish line.

"But they are also running for our son Martin, and finishing a race he wanted to someday run, but will never get the chance to," Denise Richard said in a statement to CBS News.

Martin is described as welcoming and inclusive, both polite and energetic. Jose Calderon, who coached Martin in soccer and is now running as a member of the team, remembers Martin as a talented player on the field, and a cheerful teammate on the sidelines. The young boy would have been touched by the work being done in his honor, Calderon said, but he'd want to be part of the action.

"I think he probably would have demanded to run the marathon itself if such a thing were possible."

After the bombings, a photo emerged of Martin holding a sign, with words that provided a stark contrast to the violence of the attack, and which would come to define the foundation created in his honor: "No more hurting people - peace."

The foundation now works with that mission in mind, promoting and investing in education, athletics and community. Money raised by the team goes towards aiding those efforts. The team has easily surpassed the Richard family's fundraising goals, now multiple times.

"We dared to hope the runners might be able to raise $500,000. When they blew through that figure in five weeks, we revised up to $750,000," Denise Richard said in the statement. "With that number eclipsed in March, we are just going to stand back in awe at the support and encouragement that has come in Martin's memory."

With the foundation, family and Martin in mind, the team's runners emerged through consecutive, cold, dark mornings throughout the winter. And not just in Boston. In Brooklyn, where team member Barbara McHugh is based, the treacherous road conditions sometimes pushed her indoors, to the monotony of double digit miles on a treadmill.

"I think my longest was a two-hour run on the treadmill, said McHugh, an executive at Major League Baseball Advanced Media.

"That was pretty brutal. Those treadmills reset after an hour."

Like others, McHugh said the cause was worth any discomfort. Her participation demonstrates the reach of the team, beyond those who knew the Richard family, or even those from Boston.

"They are strangers to me," McHugh said of the Richard family. "But I don't feel like a stranger anymore."

The donations have come from around the country as well. McHugh said even in the city of Boston's sports rivals, she has had no trouble finding willing donors.

"The rivalry of sports between New York and Boston exists in pretty much all the major sports leagues," McHugh said. "As much as we might be competitors, or to some extent, enemies on a court or a playing field, when it comes to real life situations, it's those two cities that seem to really support each other the most."

Runners are competitive, especially with themselves. Each will tell you they're shooting for a personal record, especially this year, even on Boston's notoriously hilly course. And members of Team MR8, while quick to note that personal accomplishment takes a backseat to their cause, are no different.

"Even if I'm second, it will feel unbelievable."

And with each ache, cramp, hill and mile, the members of Team MR8 will be wearing a reminder of Martin, and of why they're running.

"We all have a uniform, and it has his name on it, and it will be in a way, bringing a little piece of him over the finish line," said Calderon.