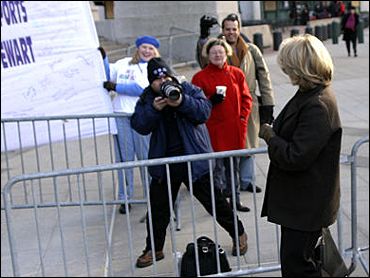 Martha Stewart's lawyer sought Wednesday to discredit the testimony of a government investigator who quizzed the domestic entrepreneur about her sale of ImClone Systems stock.

Helene Glotzer of the Securities and Exchange Commission has testified Stewart claimed she didn't recall being tipped that ImClone founder Sam Waksal was selling his shares just before she sold her own.

The government claims Stewart lied to the SEC when she made that claim, among others, in two interviews in 2002.

But Stewart lawyer Robert Morvillo tried to show that Glotzer's testimony is biased.

"Is it your hope that the government wins this case?" he asked.

"Yes," Glotzer said. "I believe in the case." But she stressed she was only a "fact witness" and had no bias in her testimony.

Glotzer admitted to Morvillo that she failed to provide Stewart a form the SEC routinely hands out to people it questions. The form spells out that lying to the SEC is a crime.

Glotzer said it was not her practice to hand out the form when the SEC conducts joint interviews with the U.S. Attorney's office.

"Either you believe [stockbroker assistant Douglas] Faneuil, and the regulator, in which case Martha Stewart and Peter Bacanovic are maybe lying to cover something up, or you believe them and think Faneuil is the one who is lying," said CBSNews.com Legal Analyst Andrew Cohen.

Glotzer testified Bacanovic had told the SEC that he personally dealt with Stewart on the day she sold her stock. An assistant actually handled the sale.

But Bacanovic lawyer Richard Strassberg claims Bacanovic actually used words like "we" and "us," rather than "I," to describe who handled the sale. He is trying to head off a charge that Bacanovic lied to the SEC.

U.S. District Judge Miriam Goldman Cedarbaum reviewed a tape of the testimony to decide whether Strassberg could use it to discredit Glotzer.

Stewart maintains that she and Bacanovic had a pre-existing deal to sell her 3,928 shares of ImClone when the stock price fell to $60 — a deal the government says was invented as a cover story.

But Stewart is not charged with insider trading. The essence of the government case against her is that she lied repeatedly about the circumstances of the sale.

Prosecutors are trying to win a conspiracy conviction by showing that Stewart and Bacanovic worked together to cook up the $60 cover story.