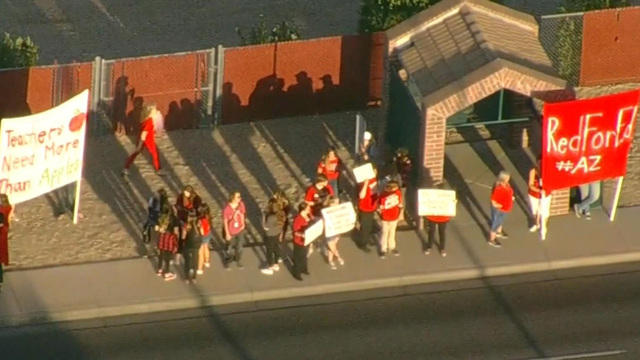 PHOENIX -- A wave of red-clad Arizona teachers were marching toward the state Capitol on Thursday for an unprecedented walkout that closed most of the state's public schools, part of an educator uprising that's also bubbled up in Colorado. Around 30,000 to 50,000 teachers and their supporters were getting ready to march through Phoenix for a rally at the Arizona state Capitol to demand a 20 percent raise for teachers, about $1 billion to return school funding to pre-Great Recession levels and increased pay for support staff, among other things.

Teachers said they won't return to work until they feel their message has been heard, CBS News correspondent Jamie Yuccas reports. Second-grade teacher Alexis Aguirre told Yuccas that living paycheck to paycheck has forced her to consider other careers.

"It's really heartbreaking to have to choose between our families and the professions that we love, but it doesn't make financial sense to stay in the classroom," Aguirre said.

In Colorado, more than 10,000 teachers were rallying in Denver as part of a burgeoning teacher revolt over low pay and insufficient funding for schools. About half of the students there will see their schools shuttered as a result, with teachers using personal leave time to take off.

The walkouts are the climax of an uprising that began weeks ago with the grassroots #RedforEd movement that spread from West Virginia, Oklahoma and Kentucky.

Teachers marched around the state Capitol in Denver, repeating chants like "Education is our right" and "We're not gonna take it anymore," and drawing honks from passing cars.

Colorado lawmakers from both parties have agreed to give schools their largest budget increase since the Great Recession. But teachers say the state has a long way to go to recover ground lost during the recession - and before - because of the state's strict tax and spending limits.

Because lawmakers cannot raise taxes without consulting voters, they're not expecting an immediate fix. The teachers' union is backing a ballot initiative to raise taxes on people earning more than $150,000 a year and corporations.

The head of the union, which is allied with the grass-roots teachers group that called Thursday's statewide walkout, told Phoenix television station KTVK on Thursday that Gov. Doug Ducey's unwillingness to meet with the group's leaders makes him believe they "will be out for a while."

Thomas has said there is no end date for the walkout and educators may have to consider a ballot initiative for education funding if lawmakers do not come up with their own plan.

Ducey, a Republican, told the station during a separate interview that he's "not ignoring anyone" but is focused on meeting with state legislators to push his plan for a 20 percent pay raise by 2020.

Organizers of Arizona's #RedforEd movement say the governor's plan relies on rosy revenue projections and doesn't address their other concerns.

The walkout has prompted the creation of makeshift daycare centers for parents who have no place to leave their children when they go to work.

Addie Martinez dropped off her 9-year-old son and 6-year-old daughter at a Phoenix Salvation Army that has opened one such center before she rushed off to her job as a medical assistant. The facility has room for up to 100 kids and will provide breakfast, lunch and snacks for $25 per child.

Martinez said she supports the teachers despite the inconvenience because "they are educating our future." She said she was prepared to take her children back on Friday and next week to the center, which offers activities that include arts and crafts and dodgeball.

Districts around the state said they would close because of the walkout.

More than 840,000 Arizona students are expected to be out of school Thursday, according to an analysis from the Arizona Republic that tallied up at least 100 school districts and charter schools are closing. The state Department of Education said the state has more than 200 districts and more than 1.1 million school children.