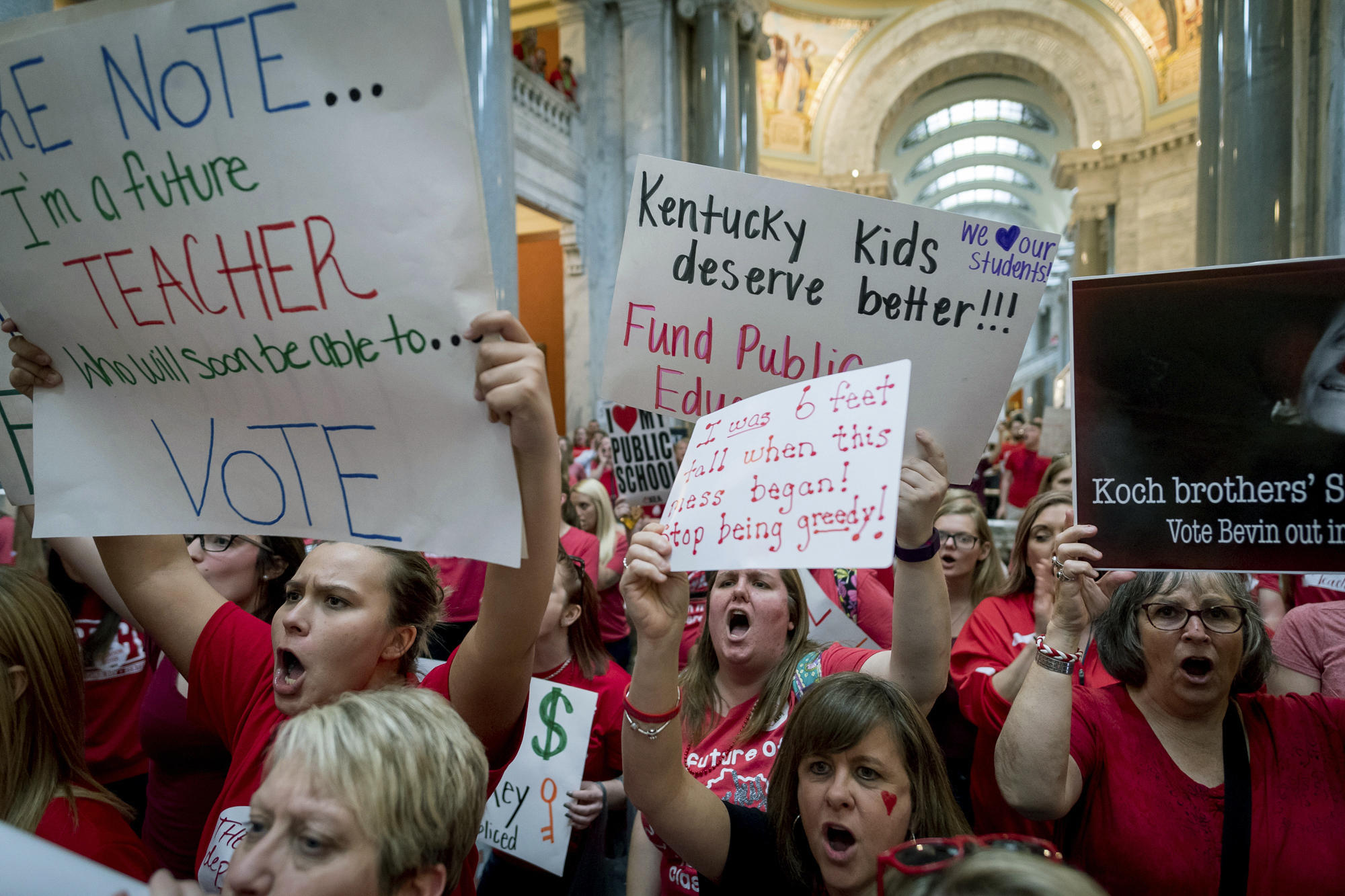 FRANKFORT, Ky. -- With the chants of hundreds of teachers ringing in their ears, Kentucky House lawmakers voted Friday to override the Republican governor's veto of a two-year operating budget that increases public education spending with the help of a $480 million tax increase. The vote came as thousands of teachers rallied inside and outside the Capitol, forcing more than 30 school districts to close as Kentucky continued the chorus of teacher protests across the country.

The rally took on a festival-like atmosphere as some teachers sat in lawn chairs or sprawled out on blankets. Crosby Stills, Nash and Young's hit "Teach Your Children" bellowed from the loudspeakers.

"I don't want to be out of my classroom. I want to be in my classroom instructing future citizens, but I'm afraid that spending at the state level is getting worse and worse, and we need those dollars for a 21st century education," said Stephanie Ikanovic, who has been a teacher for 21 years.

The two-year operating budget includes record new spending for public education, fueled by a 50-cent increase in the cigarette tax and a 6 percent sales tax on some services including home and auto repair. But Republican Gov. Matt Bevin vetoed both the budget and the money in it, calling the bills "sloppy" and "non-transparent." He said they would not raise enough money to cover the new spending.

The veto put Republican lawmakers in a tough position, asking them to vote a second time on a tax increase in an election year. But 57 Republicans eagerly voted to override, asserting their independence after a tumultuous year marred by a sexual harassment scandal.

"You can stand here all day and act like you are all for (education) until it comes time to pay for it. Well that's a coward," said Republican Rep. Regina Huff, a middle school special education teacher. "We have to have this revenue to fund our schools."

Democrats sided with the governor, but for different reasons. They said the tax increase disproportionately harms the poor while benefiting the wealthy. They wanted the vetoes to stand, forcing the governor to call a special session of the state legislature to pass a new budget.

Bevin followed the debate closely, responding to lawmakers' speeches with tweets. He said he met with House and Senate leaders all week to propose a more "responsible way to pay for 100 percent of the requested education funding."

"Crickets," Bevin tweeted, adding he vowed to call a special session to pass a new budget if lawmakers approved his vetoes.

Republican Rep. Jeff Hoover told his colleagues not to trust Bevin, reminding them the governor promised to call a special session last year to change the state's struggling pension system, but never did.

"The only reason we did not have a special session last year is because Jeff Hoover, a married man, was sexually involved with a very young, single member of his staff and was paying hush money to hide his actions," Bevin responded on Twitter.

Hoover resigned his leadership position in January. Tuesday, he agreed to pay a $1,000 fine and a public reprimand from the Legislative Ethics Commission.

The unrest comes amid teacher protests in Oklahoma and Arizona over low funding and teacher pay. The demonstrations were inspired by West Virginia teachers, whose nine-day walkout after many years without raises led to a 5 percent pay hike.

In Arizona, after weeks of teacher protests and walkout threats across the state, Gov. Doug Ducey promised a net 20 percent raise by 2020.

"The chairs are in awful condition," Kovacs said. "They're broken and they literally hurt the kids to sit down. If you look through the stacks, you can just see how many of the broken areas and cracks that will pinch you and jagged tops."

Kentucky teachers haven't asked for a raise. They are instead focused on a battle over their pensions. Kentucky has one of the worst-funded pension systems in the country, with the state at least $41 billion short of what it needs to pay retirement benefits over the next 30 years. Earlier this month when lawmakers voted to pass a bill that preserves benefits or most workers but moves new hires into a hybrid plan.

Opponents worry this will discourage young people from becoming teachers. The pension changes have already drawn a court challenge.