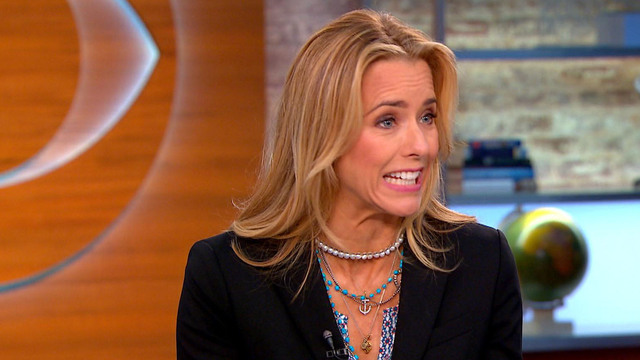 Tea Leoni is returning to television after 16 years.

She navigates the world of politics and diplomacy in the new CBS drama "Madam Secretary," which premieres Sunday at 8:30 p.m. ET/8 p.m. PT.

Leoni plays a former CIA analyst thrust into the White House as the newly appointed secretary of state.

The actress told CBS News she was immediately drawn to the project after reading the script.

Her biggest hesitation: that taking a job in TV would mean spending less time with her children.

"I have two really great kids that I like - teenagers too - and I adore them, so it had to be great," Leoni said. "I laugh because my son, who's younger, Miller, he's 12, and I said, 'You know it's going to be a little different, different schedule,' latchkey kid, all that kind of thing, and he was like, 'Mom, seriously, I'm getting a little sick of you.' I was like, 'Wow, ouch, but great.'"

In the show, Leoni plays a politician who did not come from a political background, which Leoni thinks makes her character more complex.

"I think that if this had been 'come play a seated secretary of state,' first of all I don't think they ever would have come to me," Leoni said. "I like playing a fish out of water, and I like the opportunity. I think the dirty little secret on this character is that she's hopeful and she's not cynical and she's a believer. I think she believes that this can be done."

The plot of the first episode involves two Americans being held hostage in Syria as the government tries to get them out.

"There's more wiggle room for me, being a character on television. I get to sort of try things out," Leoni said. "And it's fun to play that. Again, she's a rogue secretary of state, not a career politician, and so she's going to do things a little differently."

Leoni even called her ex-husband, David Duchovny, for advice before filming began.

"At one point I called him because I was like, first of all, and this is not so relevant for him, but my feet were killing me," she said. "I just want to call Hillary (Clinton) and say, 'Good lord, woman, how do you people-' I mean, I don't know how John Kerry's doing it at all, but the hours were so different, and David has been through this a few times, and he said, 'Oh, you'll get used to it.'"