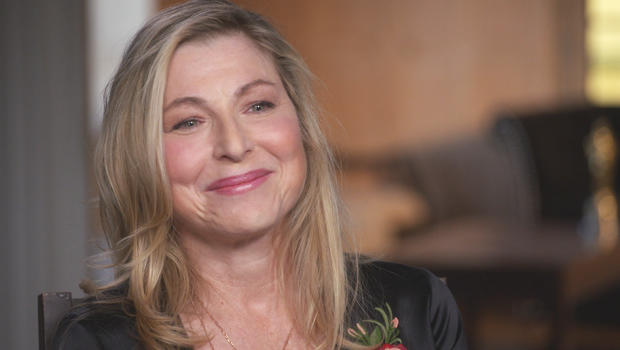 She was a child star in every sense: Tatum O'Neal was only nine when cameras rolled for 1973's "Paper Moon," but she stole nearly every scene. Playing opposite her dad, superstar Ryan O'Neal, and directed by Peter Bogdanovich, it was her first-ever film. And it wasn't easy for her, or anyone else on the set.

"A lot of those takes took 40 takes," O'Neal said. "I didn't really read very well during the film."

"Everybody hated you, on set?" asked correspondent Tracy Smith.

"Pretty much, yeah," she replied. "Until they saw, like, what they had. And then they were like, 'Oh, now we love her!'"

But when asked if she had any idea, at age 10, what it meant to win that Oscar – becoming the youngest ever to win in a competitive category – O'Neal said, "No idea."

Still, she was pretty poised for a ten-year-old, and her acceptance speech was an example of brevity that winners tonight could probably learn from: "All I really want to thank is my director, Peter Bogdanovich, and my father. Thank you."

Her next film, "The Bad News Bears," was nearly as big; she played an ace Little Leaguer opposite the great Walter Matthau. And there were other roles after this, but perhaps none equal to the promise of her first film.

Smith asked, "What does it do if you start your career, first movie you're in, boom?"

"So, you've worked on this auditioning thing because you didn't have to audition coming out of the gate?"

She still found other work, and time to play. As a teenager she was seen at all the right places with other famous faces. She dated Michael Jackson, partied at Studio 54, and hung out with Cher. "Yeah. I was an adult," she said. "I didn't see a problem with it. It was just when they had to get a crane to get me out of Cher's house because she had, like, a really amazing family. Like, she had her mom and her sisters and all these amazing women. And I'm like, 'Wait, there's no women at my house.' Well, there are, but they come and they go, every day."

"If you want to call them that!"

"But Cher was like stability for you?" Smith asked.

But the instability in her life took a toll, professionally and personally. Tatum O'Neal has always been remarkably open about her struggles with addiction, and her bitter divorce from tennis great John McEnroe, with whom she has three kids: Kevin, Sean and Emily.

But now, at 56, she says her biggest challenge ever is her latest one: rheumatoid arthritis, a disorder that can make every move a painful struggle.

Smith asked, "What does that mean for your daily life?"

"That means that my hands stopped working," O'Neal said. "It means that I can't tie my shoes. I have to re-learn to write. And I definitely need surgery on my left knee and my neck coming up in the next week."

And through it all, she says her daughter, actress Emily McEnroe, has been her rock. "My mom is incredibly loving," Emily said. "She's childlike and always has been. She's just bright. My mom lights up every room that she enters. And that's true.

"I don't know why you're embarrassed," she said to Tatum.

"No, that's such a sweet thing to say," she replied.

By the way, O'Neal says that she and Emily's dad are on good terms now, and that having her three children may have saved her life. "I was really ready to kind of fall down and not get back up," she said. "I was not myself. I was, at 22, and then the kids gave me a kind of a real reason to keep going and fight. And still, the happiest times of my life were the times that I was married, funny enough. So, sometimes we think we're making the right decision and maybe we aren't. And I have to live with that, too."

"What do you mean? What decision?"

"Well, to leave my marriage."

"That maybe looking back it wasn't the right decision?"

"Perhaps not," O'Neal said. "I was loved, I was cared for. ... That's it, that's what one wants, isn't it, in a marriage? I've never met anyone who even comes close to my ex-husband.

"He's happier, and I'm happy for him. And that makes me happy."

Her relationship with her father seems a bit more strained these days. They teamed up for a reality TV show in 2011, but since then it's been complicated. "Would I love if my dad and I were closer? There are no words," O'Neal said. "He was the first love of my life. But sometimes things don't work out the way you want them to. And I can love unconditionally without reciprocal. And I think my dad does love me. So, that's what I tend to believe, even though we don't talk as often as I would like, or see each other as often as I would like."

And you can bet Tatum O'Neal will keep trying with the same grit that she showed on screen 40 years ago, and the belief that there are bigger prizes still to come.

Smith asked, "Do you dream of winning another Oscar?"

"No," O'Neal replied. "Because that's not why I'm in it. Would I like that? I guess. For me, the biggest achievement would be that I did the best audition that I could do, that I got the role that I really wanted, and that I'm self-supporting through my own contributions."

And how does she see her future? "I think the best years are still ahead of me. How 'bout that? I do."