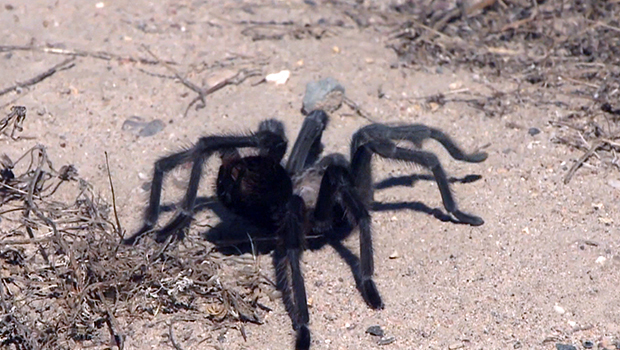 California residents can expect to see more tarantulas than usual this weekend.

"This weekend or next weekend is going to be the biggest spider movements of all. All the males will be looking for the girls so it gonna be eight legged love or spider romance," says Al Wolf, director of the Sonoma County Reptile Rescue.

The warm weather is perfect for the males, who will be out looking for love. After living in burrows for the first five to 12 years of their lives, the males risk all sorts of dangers as they seek to sow their seed.

According to eNature.com, female tarantulas wait in their burrows. An approaching male will taste the silk around the burrow to decide if there is a mature female nearby. He then drums on the surface above the burrow, signaling that he's interested.

If she emerges from the burrow, he'll keep drumming as he approaches her. Feeling receptive, she'll "raise up the front end of her body and allow him to grab her fangs with the hook-like projections on his forelegs," according to eNature.com.

After inseminating the female, male tarantulas often meet a tragic fate: if females are hungry, they sometimes overpower and then devour them. It's not too hard, considering the males are already entangled in the female's fangs. Even if they escape, mature males die by the end of mating season.

The full mating season starts in late summer and can last up to two months. It ends around the time the first winter rains come in.

While the tarantulas will likely be all over popular hiking and walking trails, Wolf says there's no need to worry about the tarantulas. They're interested in each other, not in humans.

"They look ferocious but surprisingly most tarantulas, at least those in the United States, are pretty harmless." If they do come close, it's important not to touch them, Wolf added, because they will perceive that as a threat.

By spring, the females will give birth to hundreds of offspring.