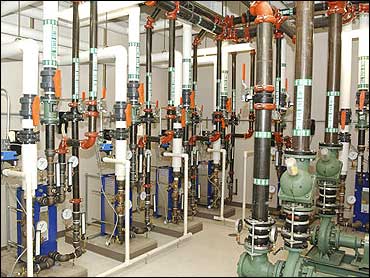 Sue Butler decided it was time to cut the cord on fossil fuels. So when her aging gas furnace needed replacing, she turned to the Earth for a solution.

She installed a geothermal system - also called a ground-source heat pump, a water-source heat pump, or geo-exchange system - which recently started heating and cooling her Cambridge, Mass. home. Butler said she was motivated by environmental reasons and concerns over carbon monoxide from burning natural gas.

"It's not that much more expensive and I could manage it. And it means no more combustion and it gets the building off of carbon, which is urgent," she said.

Ground-source heat pumps have been around for decades but every year seem to attract more homeowners and organizations who are looking for alternatives to traditional space heating and cooling. They can hook into existing forced hot air and hot water systems but not steam heat.

One real-estate developer, MassInnovation, has made geothermal an integral part of its eco-themed housing and office buildings. Having equipped one senior living center with geothermal, it's now planning on converting what was once a giant 19th century factory into one of the largest geothermal installations in New England, according to CEO Robert Ansin.

People who go with geothermal are typically either interested in it because it's a clean energy technology or because they're looking to escape fossil fuel prices, said Diona Roberg, the director of operations at Water Energy Distributors, which distributes geothermal systems from ClimateMaster.

"Business is out of control - we can barely keep up with it," Roberg said. About half of the customers go geothermal to cut heating and cooling costs. But the other the half "don't care what it costs, they just want to do green," Roberg said. The family-owned business has doubled in size over the last four years.

Strictly speaking, what's often called a "geothermal system" is a misnomer because it implies tapping the heat in the Earth, something already done at large scale to supply electricity to utilities. This geothermal energy - and its offshoot enhanced geothermal - only works in certain geographies and uses different technology. 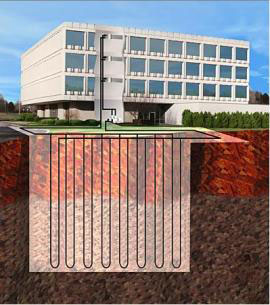 (WaterFurnace International)
(A "vertical" loop of a ground-based, or an open-loop ground-source heat pump.)

Rather than use underground heat, geothermal heat pumps attached to buildings capitalize on the steady temperature of the ground or deep water wells. In effect, they treat the Earth like a giant energy savings bank, depositing or withdrawing heat depending on the time of year.

During the summer, the systems pump indoor heat underground and draw on the lower temperatures of the Earth to cool a building. In colder months, the same process works in reverse, with heat from the ground being used to warm indoor air.

Indoors are box-shaped heat pumps that pull and push either water or a working fluid, such as antifreeze, in and out of the ground. Using the same compressor loop mechanism that a refrigerator has, a heat exchanger draws energy from the circulating liquid to either heat or cool a building.

There are a number of different configurations for the liquid transfer loops - either water wells several hundred feet deep, which are said to be the most efficient, or coils which could be dug only a few meters underground. Others use a body of water like a pond as a heat sink.

Regardless of type, though, ground-source heat pumps are considered one of the most efficient forms of heating and cooling.

The International Ground Source Heat Pump Association, based in Stillwater, Oklahoma, said geothermal is 50 percent to 70 percent more efficient for heating than other systems. The U.S. Department of Energy says that a ground-source heat pump uses 25 percent to 50 percent less electricity than conventional heating and cooling systems.

Roberg said that the maintenance costs for geothermal are half the cost of traditional heating and cooling systems. The payback on geothermal systems, which used to be about seven years, is now typically four years, she said. Recently passed federal renewable energy incentives now include $2,000 per year tax credit.

But even with these benefits, geothermal heating and cooling still remains a relatively niche product, with about 50,000 units installed a year in the U.S., according to the Department of Energy.

One reason is the upfront cost. All told, a geothermal heating and cooling installation, including duct work, will be about 50 percent more expensive than fossil fuel-based system, Roberg said.

Drilling is typically the biggest portion of the bill because it can cost tens of thousands of dollars alone. The geo-exchange pumps themselves for homes can cost between $17,000 to $30,000, according to Butler.

Experts warn that installations of these systems are very site specific--poor installation of ducts, for example, can lead to an underperforming unit.

Also, certain regions appear to be better suited for geothermal-exchange technology; some developers have reported that pumps that spend most of the year pumping heat underground, and little time pulling heat out, don't perform as well over time.

In its analysis of its first six geothermal systems (click for PDF), Harvard identified a number of installation challenges related to the design of wells and understanding the water resources underground.

A more subtle challenge is the status quo. Homeowners who aren't aware of geothermal systems will install what contractors - also unfamiliar with the technology - will recommend.

He was looking at spending a significant portion of his overall budget - about $500,000 - on a standard industrial furnace and chiller when he had a chance encounter with a driller friend who suggested that geothermal heat pumps might be cheaper.

Ansin had never heard of geothermal, but once he looked into it, he realized that it could be both cost-effective and allow him to differentiate his buildings in a way other than just location. The facility, called Anwelt Heritage Apartments, is marketed as an eco-friendly building that uses a ground-source heat pump and a solar array.

The system is about half as expensive as the traditional set-up, said Ansin, who is now part owner of a drilling outfit. He passes the lower utility costs to people in the 86 residences, who pay less than a half of what they were paying in utility bills.

He's very enthusiastic about the technology but admits that the geothermal industry is immature compared to the traditional heating and cooling business.

"Even though heat pumps and geothermal space conditioning has been around for a while, it's still considered very much a new market and as such, there aren't nearly enough contractors and engineers," he said, adding that an installation can require coordinating different contractors. "Unfortunately, until you have a one-stop-shopping solution, it's not going to become nearly as ubiquitous as it could be."

Martin LaMonica is a senior writer for CNET's Green Tech blog. He started at CNET News in 2002, covering IT and Web development. Before that, he was executive editor at IT publication InfoWorld. E-mail Martin at martin.lamonica@cnet.com
By Martin LaMonica 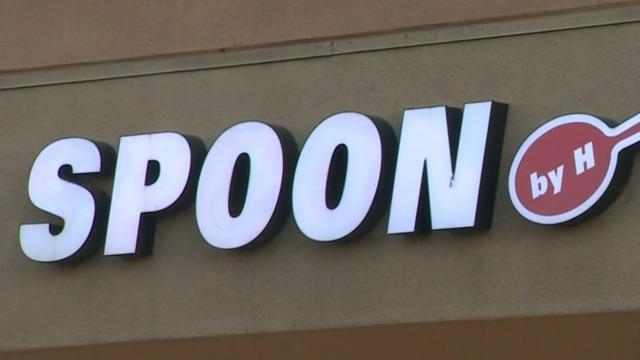