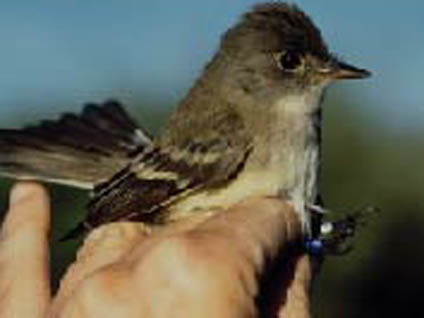 The U.S. Department of Agriculture ((USDA) has quietly ceased efforts to eradicate tamarisk, or a "salt-cedar" shrubs, from 13 Western and Midwestern states in order to protect populations of the southwestern willow flycatcher, a species of bird that uses the tamarisk for nesting.

According to the USDA notice released by Public Employees for Environmental Responsibility (PEER), the use of tamarisk leaf beetles, a natural enemy of the plant, as a biological control agent has been terminated.

While the USDA has not issued a public announcement about this move, it notified some state and local agencies in a June 15th release about plans to stop use of the leaf beetle.

"A hundred years ago, few imagined that tamarisk could spread across the West," while "five years ago, USDA liberated the leaf beetle under the illusion that nothing could go wrong," said Jeff Ruch, director of Public Employees for Environmental Responsibility (PEER), said in a press statement issued Tuesday.

In the 19th century tamarisk species were imported to the U.S. to facilitate drought and soil erosion control. However, by 1940 the entrenched tamarisk was labeled a "water hog," and was consuming disproportionate amounts of water from the riverbanks of the Western and Midwestern states.

The flycatcher became closely associated with the tamarisk was because the riverbanks became too shallow to support the large willow trees from which the species gets its name.

The program to use leaf beetles to combat tamarisk was instituted in 2005, without the USDA completing a detailed environmental review that consider the impact on the bird population, according to Matthew Chew, an assistant research professor at Arizona State University.

He contends that efforts to create water by killing plants have been misguided. Tamarisk was bulldozed, burnt and even flattened by massive Letourneau tree crushers, but once the rivers were so de-watered, the tamarisk was better adapted to the rivers because conditions had been so altered, Chew said.

"This episode underlines the hubris of efforts to engineer nature," Ruch said in the PEER press release. "Perhaps the best hope for the endangered southwestern willow flycatcher is for it to develop a taste for leaf beetles."

Brian Mastroianni contributed to this article.