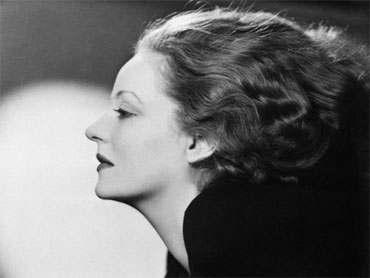 Tallulah Bankhead stole the show in the 1944 movie "Lifeboat," as she invariably did on stage, screen or radio. Now, 42 years after her death, Bankhead is back on Broadway, seemingly channeled by an accomplished actress of today. Rita Braver shows us Tallulah then and now:

Her voice, her wit and her face were captivating.

You can't take your eyes off Tallulah Bankhead in films like Alfred Hitchcock's 1944 "lifeboat," where she plays a reporter who survives a German U-boat attack.

But it was Tallulah's real-life behavior that really got people's attention.

"I'm as pure as the driven slush," she said.

"She was very promiscuous, a self-proclaimed bisexual," said playwright Matthew Lombardo. "Long before there was Brittany Spears, long before Lindsey Lohan, Tallulah Bankhead was doing things in the '30s and '40s that most actresses wouldn't dream of doing now."

"There were stories that she turned cartwheels in front of people without wearing the proper underclothes?" asked Braver.

"Yes, she did a lot of things like that," he said. "She smoked 100 cigarettes a day. She drank bourbon and gin like it was water."

He wrote a show about her that opens on Broadway tonight!

And if you are thinking that actress playing Tallulah in "Looped" looks kind of familiar . . .

"I know people are usually running up to you and going 'Rhoda!' Rhoda!' right?" asked Braver

"Yes, it's true, yeah, and more and more they say 'Valerie!," said Valerie Harper. "But they'll say, 'Valerie! I loved "Rhoda!"' But in the early days it was 'Rhoda, Rhoda, Rhoda,' completely."

Yes, Valerie Harper, or Rhoda from "The Mary Tyler Moore Show," and later her own spin-off series.

Yes, that Valerie Harper is now transforming herself each night into Tallulah.

"I've looked at pictures of her. I do my own makeup, and I replicate the shape of her eye," she said. "She's so extravagant a personality, so specific. Her affectation became who she really was."

And of course there was her language.

"New York, that is a great city. You know why it's a great city? Because it was built for [bleep] morons. Everything is numbered. You get lost in Manhattan, you don't deserve to be found."

Harper, is in fact, a veteran Broadway actress.

"It's thrilling," she said. "You know, to be on the marquee is great."

She loves the fact that the theater where the new show is playing is just a block from the Algonquin Hotel, where Bankhead (who was born in 1902) lived when she first came to New York at age 15 to break into the theater . . . fresh from Jasper, Alabama, the descendant of a prominent political family:

"There was an Alabama Bankhead in Congress for 60 years straight," Harper said. "Grandpa was a Senator. Uncle John was a Senator. Her father, Will, was Speaker of the House, and he was almost running mate with FDR."

To prepare for the roll, Harper studied everything she could find, even a cartoon character Bankhead is said to have inspired: Cruella de Vil in "101 Dalmations."

Bankhead was such a celebrity that newsman Edward R. Murrow interviewed her on "Person to Person in 1953.

"Why do you call everyone 'darling,'" he asked her.

"Because I can't remember their names," she replied.

Bankhead was an accomplished actress - a star of stage and of screens large and small, even appearing as herself, the new neighbor on the "Lucy-Desi Comedy Hour."

In later years, her wild lifestyle seemed to catch up with Tallulah. The new play "Looped," is based on a real event.

"The title stands for the fact that he had to do a looping session, or re-recording a line or several lines, from her final film, 'Die, Die, My Darling,'" said Lombardo, "but it has to do with the fact that she showed up drunk during the recording session."

In the 1965 film, Bankhead plays the villain, a religious fanatic who takes Stephanie Powers hostage.

"She was not only a perfomer, but she was a bit of an exhibitionist," Powers laughed. She vividly remembers being summoned to Bankhead's dressing room during the shoot . . .

"And frequently she might be sitting naked on the toilet," Powers said. "This was not necessarily an attractive sight, but it was her way. She loved shock value!"

"As I was telling you, even though that deluded rector has in literal effect closed the church to me ..."

... someone made an audio tape of the marathon session, where Bankhead kept stumbling.

Bankhead: "As I was telling you, Patricia, that deluded rector, has in effect literally closed . . . "

Recording Assistant: "'... has in literal effect closed the church to me.'"

Recording Assistant: "Come one, take the cigarette out of your mouth. You can't do it with a cigarette."

"And at first I thought it was hysterical, because she's drunk and she's belligerent," said Lombardo. "But then the more I listened to it, there was a sadness in her voice."

Which you can hear in the play as well:

Danny: "It's that deluded rector."

"Her body had gone through about as much, I suppose, as a body could stand with alcohol and drugs - just an overindulgence in life," said Powers.

But when you study that life, you come to understand that this is really a person of substance, that there was a reason that she was so famous:

And then there was how she replied when asked by Murrow to describe herself:

For more info:
"Looped"
"Tallulah! The Life and Times of a Leading Lady" by Joel Lobenthal (HarperCollins)
The Oak Room at the Algonquin Hotel