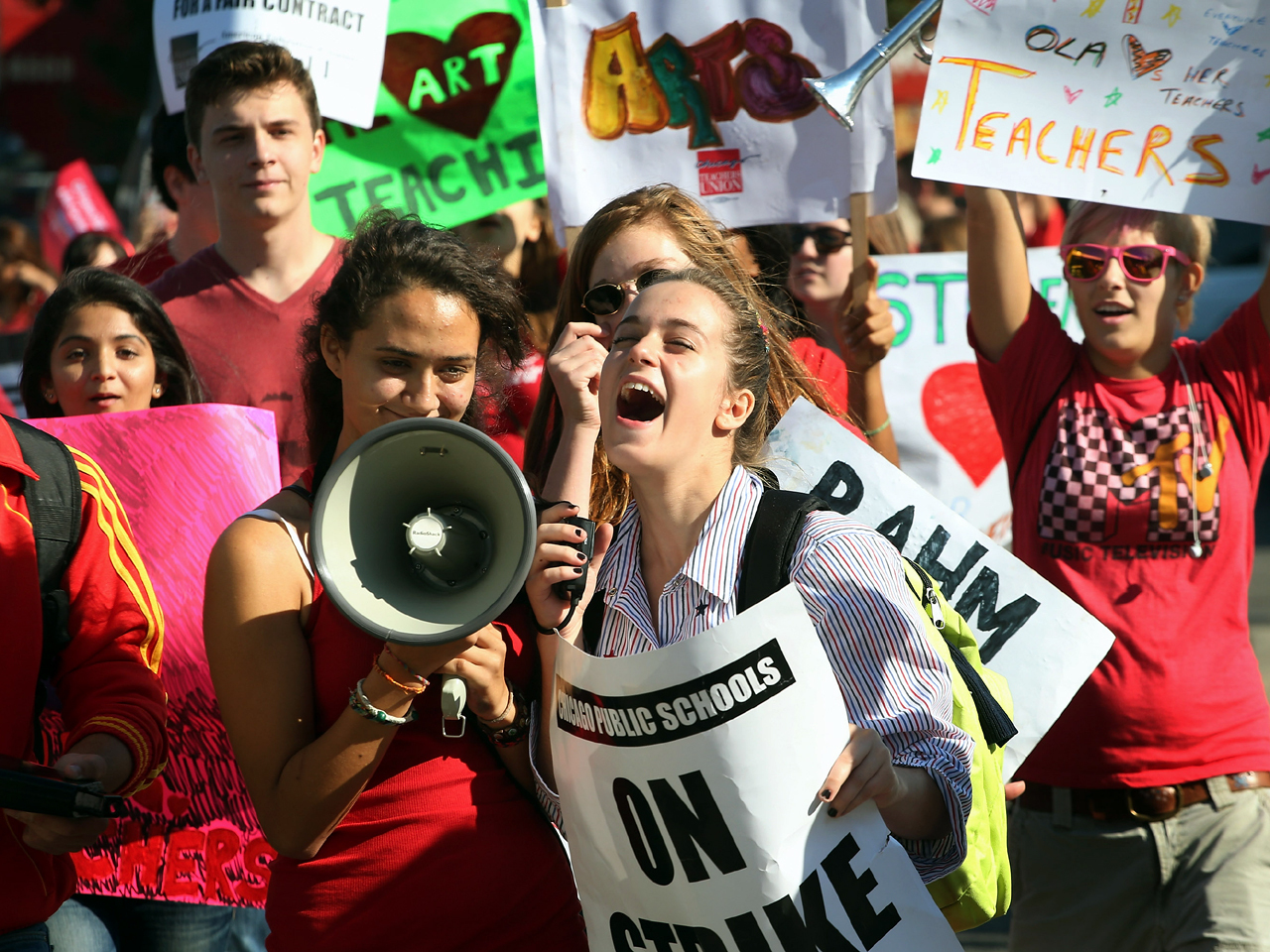 (CBS/AP) CHICAGO - The public teachers' strike that has halted classwork and upset family routines across Chicago ground into a third day Wednesday with some movement reported by union and school board negotiators but no sign of an imminent deal.

Both sides headed back to the negotiating table at 11 a.m. local time Wednesday, CBS Chicago station WBBM-TV reports. Tuesday's talks between the two sides ended around 8 p.m. after negotiators spent all day trying to hammer out an agreement on a new teacher evaluation system. School board negotiators have written a comprehensive proposal that addresses all the issues still on the table and has requested a written response or comprehensive counterproposal from the union.

But the teachers Tuesday were lowering expectations for an agreement, buoyed by energetic rallies in which even parents inconvenienced by the strike waved placards in support. Other unions were joining in, with school custodian representatives saying their members will walk off the job this week as well.

Board President David Vitale, the lead schools negotiator, said early in the day that a deal could be reached, but union President Karen Lewis and her colleagues emerged from the talks accusing the board of having dug in its heels with its new proposal. The new evaluation system and a process for deciding which laid-off teachers can be rehired are among the biggest remaining issues.

"There's been — let's put it this way — centimeters (of progress) and we're still kilometers apart," said Lewis, who earlier stated it was "lunacy" to think the issues could be wrapped up quickly.

School officials also took steps to prepare for a long haul, despite persistent assertions by Mayor Rahm Emanuel and others that the strike was "unnecessary" and could be resolved quickly. The school district in the country's third largest city announced that, beginning Thursday, the 147 drop-off centers where students can get free breakfast and a morning of supervision will be open six hours a day rather than four.

Vitale said late Tuesday that the two sides had held extensive discussions on the teacher evaluation system. But he questioned the seriousness of the union negotiators, noting that they had encouraged the protesting teachers to enjoy themselves at a rally during the day.

As the teachers walk the picket lines, they have been joined by parents who are scrambling to find a place for children to pass the time or for baby sitters. Mothers and fathers — some with their kids in tow — are marching with the teachers. Other parents are honking their encouragement from cars or planting yard signs that announce their support in English and Spanish.

Unions are still hallowed organizations in much of Chicago, and the teachers union holds a special place of honor in many households where children often grow up to join the same police, firefighter or trade unions as their parents and grandparents.

"I'm going to stay strong, behind the teachers," said the Rev. Michael Grant, who joined educators on the picket line Tuesday. "My son says he's proud; 'You are supporting my teacher.'"

But one question looming over the contract talks is whether parents will continue to stand behind teachers if students are left idle for days or weeks. That ticking clock could instill a sense of urgency in the ongoing negotiations.

Mary Bryan, the grandmother of two students at Shoop Academy on the city's far South Side, supports the teachers because she see "the frustration, the overwork they have." A protracted labor battle, she acknowledged, would "test the support" of many families.

Parents "should stick with them, but they might demand teachers go back to work," Bryan added.

To win friends, the union has engaged in something of a publicity campaign, telling parents repeatedly about problems with schools and the barriers that have made it more difficult to serve their kids. They cite classrooms that are stifling hot without air conditioning, important books that are unavailable and insufficient supplies of the basics, such as toilet paper.

"They've been keeping me informed about that for months and months," Grant said.

It was a shrewd tactic, said Robert Bruno, professor of labor and employment relations at the University of Illinois at Chicago.

"This union figured out they couldn't assume the public would be on their side, so they went out and actively engaged in getting parent support," Bruno said. "They worked like the devil to get it."

But, said some reform advocates, public opinion could swing against the union relatively soon if the dispute seems to carry on with no resolution in sight.

Juan Jose Gonzalez is the Chicago director for the education advocacy group Stand for Children, which has hundreds of parent volunteers and was instrumental in pushing legislative reforms in Illinois. He says parents "are all over the map" in terms of their support for teachers or the school district.

"Within a day or two, all parents are going to turn their ire toward the strike," Gonzalez said. "As parents see what the district offers and see the teachers not counterpropose, they will become increasingly frustrated with the grandstanding."

Already, there are some parents who don't understand why teachers would not readily accept a contract offering a 16 percent raise over four years — far more than most American employers are giving in the aftermath of the Great Recession.

Rodney Espiritu, a stay-at-home dad whose 4-year-old son just started preschool, said the low test scores he's read about suggest teachers don't have "much of a foot to stand on."

In a telephone poll conducted Monday by the Chicago Sun-Times, nearly half of people surveyed said they supported the teachers union, compared with 39 percent who oppose the strike. Almost three-quarters of those polled regarded Emanuel's efforts to resolve the dispute as average, below average or poor. The poll of 500 registered voters had a margin of error of plus or minus 3.8 percentage points.