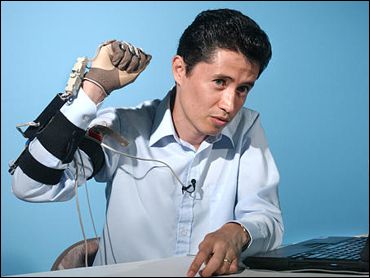 An electronic glove that can turn American Sign Language gestures into spoken words or text, designed to help the deaf communicate more easily with the hearing world, is under development.

Researcher Jose Hernandez-Rebollar of George Washington University has demonstrated that his "AcceleGlove" can translate the rapid hand movements used to make the alphabet and some of the words and phrases of sign language.

His is not the only such experimental device; the military is exploring similar technology to silently help soldiers in combat. But Hernandez-Rebollar says his invention goes further than others because it also can translate into spoken words and simple sentences some of the more complex arm and body motions of ASL.

The 34-year-old native of Mexico came to Washington through the Fulbright Program, which makes grants for graduate students, teachers and others to study abroad. His field is electrical engineering, and the sensor-studded glove was his doctoral engineering project.

Not deaf himself, Hernandez-Rebollar said his invention was driven by a desire to help others live fuller lives.

"I want to produce something that deaf people can use in everyday life," he said.

According to the National Campaign for Hearing Health, which promotes research and education about hearing loss, 28 million people in the United States have hearing trouble.

The AcceleGlove is a wearable computer with super-small electronic circuitry. Sensors in the glove work with a micro-controller attached to the wearer's arm, mapping the placement and movement of the arm and fingers. That information is turned into data a computer can read and convert to words heard from a loudspeaker or read on a computer screen.

Deaf parents with hearing children, and vice versa, could find the glove helpful, said Corinne K. Vinopol, who heads the Institute for Disabilities, Research and Training Inc. The commercial laboratory in suburban Wheaton, Md., is where Hernandez-Rebollar has been doing much of his work.

She especially was interested in his work to make his device translate American Sign Language into spoken Spanish as well as English because of the help it could give to immigrant families.

"The small deaf children go to school and learn English and ASL," she said. "The parents go on speaking Spanish. Gradually they lose any means of communication."

But the idea of turning sign language into speech annoys some deaf people who see ASL - used in the United States and English-speaking Canada - as part of their unique culture.

"Some feel that being deaf is not a deficiency," said Andy Lange, president of the National Association of the Deaf. "It's simply another way of life and the deaf should not use artificial means to overcome a loss of hearing."

Other researchers are working on wearable devices for translating movement to sound.

A baseball cap with cameras to capture movement was another experiment. Ryan Patterson, 18, of Grand Junction, Colo., won top honors in the 2001 Siemens Westinghouse Science and Technology competition and in the 2001 Intel International Science and Engineering Fair for his design of a glove that translates hand movements into text on a screen.

Hernandez-Rebollar demonstrated his invention during a recent interview. He wore a right-hand glove and two small armbands, one near his wrist and the other on his upper arm.

His software converted the signs he made with his hand into sound from a small loudspeaker - all in milliseconds. After a few taps on a laptop keyboard, he made standard American Sign Language gestures and the loudspeaker came out with single words - "food," "drink," "restaurant," "father." The words can also appear typed on a screen.

The single glove can make the signs that correspond to all 26 letters of the alphabet, so any word can be spelled out. But this is a slow process.

American Sign Language also includes hundreds of gestures that express single words and simple sentences, but most require two hands. So far the single glove can produce fewer than 200 words that can be signed with the one hand, and a few expressions such as "What's the matter?" and "I'll help you."

Some further testing is needed, Hernandez-Rebollar said. He believes the right hand glove could be manufactured and on the market next year, while a two-handed version with much greater possibilities could be ready in 2005.

He said the device usually is accurate, though the precision declines with complicated movements; for example, words that start with the same hand movement or orientation.

He said the glove could be attached to existing wireless equipment and used by a squad commander to send hand signals from outside a building to soldiers hiding inside. They would feel the signals as gentle coded vibrations in their chests or typed on a screen.

That is an idea the military has been working on. The Defense Advanced Research Projects Agency and other federal agencies have given contracts to develop sensor-equipped gloves that would allow soldiers to send silent wireless notes to one another with hand motions.

Women and children first? Not quite, says report