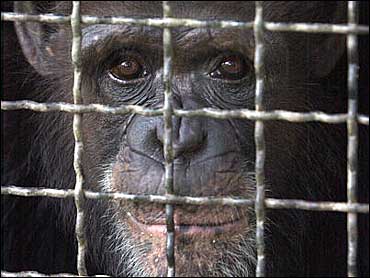 Coby is not your average chimpanzee.

It's true that the 23-year-old chimp has a peculiar fascination with shoes, taking every opportunity to lure observers close enough to stick his fingers through the fence and feel their footwear.

And yes, if you get close enough to his cage at Black Pine Animal Park, he will throw dirt, food — anything he can find — at you while his companion, Tarzan, makes loud sounds that resemble what some call a "raspberry."

But what really sets Coby apart from the other members of his species is one thing — he can talk. Or at least, he's trying to.

And Ohio University psychologist Patrick Drumm is trying to figure out what he's saying.

As Drumm crouches in front of Coby's cage with a jug of water, the chimp raises his palm to his mouth, forming the sign for "eat" or "consume."

Drumm corrects the gesture, showing Coby the sign for "drink," which resembles tipping an imaginary teacup to his lips.

Coby watches, keeping one eye on the enticing jug of cold water, and then signs again, "eat." Close enough, for now, Drumm gives the chimp some water.

Coby is a "sloppy" signer, Drumm explains, which is one of the reasons it is so hard to figure out what the chimp is trying to communicate. But Drumm is willing to give it a try.

When Drumm, a psychology professor at Ohio University-Lancaster, was told by a former student about a chimpanzee trying to use sign language at an animal park in Albion, the doctor was not particularly convinced.

Having spent many years since the late 1970s teaching chimpanzees sign language, Drumm knew where every one of the signing chimps was located. Albion wasn't on that list.

His curiosity finally got the better of him, however, and he made his first trip from Ohio to see the mystery chimp of Albion about two years ago.

After seeing Coby trying to communicate with park patrons, Drumm began to do some research into the past of this chimp who, sometime in his life, had learned how to use sign language.

Drumm was able to establish that the chimp lived with unidentified owners until he was 5 years old. During his first few years with his original owners, Coby was apparently taught how to sign.

"Our information is that he was taught about 50 signs," Drumm said.

When he reached age 5, Coby became too strong for his original owners to handle. He was relocated to Pennsylvania, where he lived with other chimps, including his current companion, Tarzan.

Coby spent 12 years in Pennsylvania. When his owner became too old to care for the chimps, she contacted Black Pine Animal Park.

The owners of the park, who often take in retired or rescued animals, agreed to take both Coby and Tarzan in 1997.

However, after spending 12 years in an environment where nobody could understand his signs, Coby's abilities began to diminish.

But, because he learned to sign during that critical period in his infancy, Drumm is convinced that, with a little help, the chimp can re-establish communication with humans.

"The interesting thing about his case is that he learned signs in that critical period, which is why he is doing what he is doing now," Drumm said. "But the extended period of deprivation seems to have degraded the quality of his signs."

Can you teach an old chimp new tricks? And why does it even really matter?

Drumm believes it is both possible and important that Coby re-establish communication with humans.

From the research point of view, Coby represents a unique learning opportunity. He is the only chimp Drumm has ever encountered who learned sign language from private individuals, not scientists. And Drumm only knows of nine chimpanzees that have been taught by scientists to sign.

That makes this case particularly unique. Drumm is interested in finding out whether Coby can recover his language skills, and hopes his research can be beneficial in studying human language development.

But, probably just as important, is the effect this will have on Coby. Drumm thinks the chimp likely feels frustration because he was taught how to communicate and then was abandoned by those who could understand him.

"We think we can make his life better," Drumm said. With the initial phase of observations over, Drumm plans to proceed, possibly as soon as next summer, to the second phase of his research. This phase will involve a concerted effort to teach Coby proper American Sign Language signs.

"If I could come out here for a month, I bet we could make significant progress," Drumm said. Drumm's ultimate goal is to establish, or re-establish, communication with Coby.

Although some skeptics feel teaching a chimp to sign is like training any animal to perform a task, Drumm believes it's very different.

"It's special to work with chimps because they're so smart," Drumm said. "When they try to communicate with you, you feel like you're having a real exchange with another species. I personally think there is a genuine communication."

Drumm stands up and looks at Coby as he places a fist in his hand and moves it in the direction of the corner of the cage, making the sign for "chase."

Coby stands up and, seeming to understand the sign, runs with the professor along the perimeter of his cage.

If the goal is to establish communication, it looks like a step in the right direction.