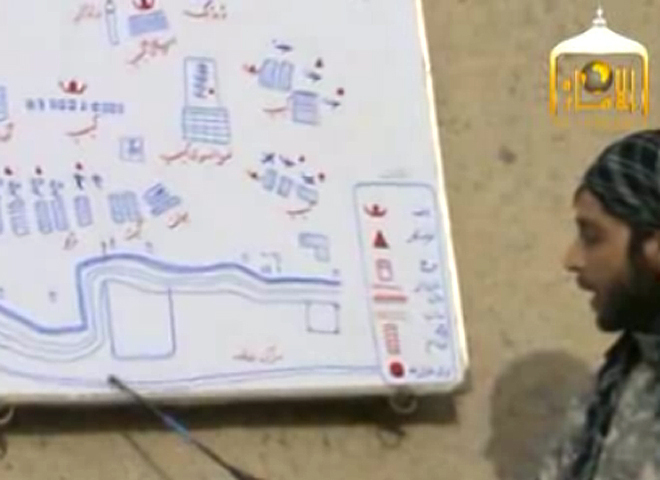 (CBS/AP) KABUL, Afghanistan - The Taliban published a video Monday they say shows insurgents preparing for the brazen attack on a major NATO base earlier this month, just as NATO forces released data showing that insurgent attacks decreased in August.

The twin releases are a reminder of the escalating battle for public opinion between the insurgency and the international military as U.S. and allied troops draw down. The Taliban continue to contend that they are fighting at full force while the international alliance says that they have been weakened.

In the Sept. 14 attack on Camp Bastion in Helmand province, 15 insurgents dressed in U.S. Army uniforms breached the base's perimeter fence then used automatic rifles and rocket-propelled grenade launchers to fire on planes and people around the base's airstrip. They managed to kill two Marines and destroy six fighter jets costing tens of millions each before they were stopped. All but one of the assailants were killed in the fighting.

The Taliban video shows men wearing U.S. Army uniforms as they practice cutting through a chain-link fence and charging through the opening. One man indicates targets with a pointer and a whiteboard showing drawings of planes and fortifications. He speaks Pashtun, a major language in southern Afghanistan and parts of Pakistan. Words on the whiteboard are written in Urdu, a language more common in Pakistan.

A Taliban spokesman emailed the link to the video to the media but it was not possible to verify the authenticity of the footage. Nothing in the video indicates when or where it was filmed.

"We are not suicide bomber," the speaker professes, "like other young boys. [We] just we want to sacrifice ourselves in the name of almighty Allah."

The NATO statistics showed that insurgent attacks decreased 9 percent in August, compared with the same month last year — continuing a falloff that started in July after a spike in attacks in May and June.

NATO said the shortened poppy harvest in the spring meant that the usual summer fighting season started earlier. Regionally, attacks decreased in the east and south, but increased in the west and north, according to the data.

Overall, NATO's figures show insurgent attacks are down 5 percent for the year so far, compared with the same period of 2011.

There has, however, been a recent spike in insider attacks.

Secretary of Defense Leon Panetta said last Tuesday that the attacks do not mean the Taliban is succeeding. Instead, he said the Taliban "are resorting to efforts that try to strike at our force, try to create chaos, but do not in any way result in their regaining territory that has been lost."

Last week NATO said that it has scaled back operations with Afghan soldiers and policemen to lower the risk of insider attacks and reduce local tensions over an anti-Islam video that prompted protests in Afghanistan.

Australian Army Brig. Gen. Roger Noble, deputy to the deputy chief of staff for operations of the U.S.-led military coalition in Afghanistan, told reporters in Kabul earlier this month that fighting in the south — the Taliban strongholds of Kandahar and Helmand provinces — has moved away from the bigger towns and cities.

"If you think back to 2010, people were talking about central Helmand being the center of fighting, but it's been pushed out and away from most of the major population centers," he said. "But there is still plenty of fighting and it is dangerous and having a direct effect in casualties on the coalition and also, increasingly, on the Afghan security forces."

Nearly two years after President Barack Obama announced that he was sending another 33,000 troops to take on the Taliban, those reinforcements have just completed their return to the United States. That leaves about 68,000 American troops, along with their NATO allies and Afghan partners, to carry out an ambitious plan to put the Afghans fully in the combat lead as early as next year.