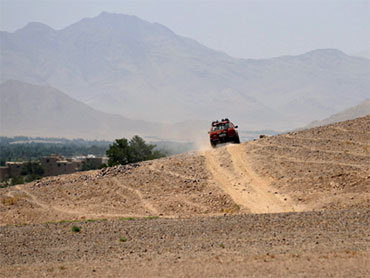 The Taliban claimed Monday to have killed two U.S. troops with a landmine attack on a tank in the area where a massive search was underway for a soldier kidnapped by the militants several days earlier.

A statement posted on the Taliban's website claimed two troops were killed and two others wounded in the mine attack, which allegedly took place in northern Logar province at about 8 a.m. local time (11 p.m. Sunday EDT). The claim could not be immediately verified, and the Islamic fundamentalist movement often exaggerates claims of NATO casualties.

Several Afghan government officials in Kabul told CBS News Monday morning they were unaware of any attack on a tank in Logar Province. CBS was seeking confirmation with military sources.

The Taliban claimed Sunday that they killed a U.S. sailor and kidnapped another as NATO forces ramped up their search for the servicemen, who went missing Friday in an area held by the militants.

The coalition force set up checkpoints and distributed fliers with the sailors' pictures and were offering thousands of dollars in rewards for their return.

The chairman of the U.S. Joint Chiefs of Staff, Adm. Mike Mullen, said the military said it is doing all it can to return "anybody who has been captured or killed." He called the incident a reminder of "the service and sacrifice that so many make."

CBS News national security correspondent David Martin reports the body of one of the two men has been recovered, but is still in the hands of the Taliban.

Afghan officials involved in the search for the missing service member and the recovery of the slain man tell CBS News' Fazul Rahim the body is in a house in the Charkh district of Logar province and the Taliban have issued some demands in exchange for handing it over to the U.S. military.

The officials would not say what the demands were, but said they had been passed on to American military officials. A local official in the eastern province of Logar says the Taliban is offering, through intermediaries, to hand over the body in exchange for jailed insurgents.

The Afghan officials said they were confident the sailor's remains would be handed over soon.

U.S. and NATO officials confirmed that two American Navy personnel went missing Friday in the eastern province of Logar, after an armored sport utility vehicle was seen driving into a Taliban-held area. NATO officials were unable to say what they were doing in such a dangerous part of eastern Afghanistan.

The news came as 91,000 classified military documents were made public by the whistleblower website Wikileaks, apparently showing unreported civilian deaths, Taliban use of heat-seeking missiles and purported Pakistani collusion with Islamic militants.

Taliban spokesman Zabiullah Mujahid also said the pair drove into an area under insurgent control, prompting a brief gunfight in which one American was killed and the other was captured. He said both were taken to a "safe area" and "are in the hands of the Taliban."

Martin reports the two sailors, members of a team training Afghans, left their base at Camp Julian near Kabul in an SUV for the relatively short drive to Camp Eggers.

Their badly shot-up vehicle was found 80 miles south of Kabul. Why they strayed so far and why they drove into Taliban-controlled territory by themselves - a blatant violation of security procedures - remains unknown.

Another local official, Abdul Wali, the deputy head of the provincial governing council, said the Taliban sent a message through intermediaries offering to hand over the body of one sailor in exchange for jailed insurgents.

He said local authorities told the Taliban, "'Let's talk about the one that is still alive.'" He said the insurgents indicated they would have to talk to superiors before making any deal.

Mujahid, in a telephone call Sunday with The Associated Press, did not mention any Taliban demands.

"We are going to talk about that later," he said.

The Taliban did not claim responsibility for the missing sailors for more than 48 hours after the ambush. That suggested that the Friday attack was unplanned and the militants were trying to figure out how to handle it.

Later Sunday, the Taliban posted a message in English and Arabic on their website that claimed one American service member had been kidnapped in Logar and said another was killed in a shootout, according to SITE Intelligence Group. The website message included a picture of one of the fliers, showing the photo of one of the sailors, but did not say whether he was alive or dead.

The Taliban have one of the sailors in a "safe place" where he will not be found. The message also mentions Spc. Bowe Bergdahl, the only other U.S. service member known to be in Taliban captivity.
Bergdahl of Hailey, Idaho, disappeared June 30, 2009, in Paktika province, also in eastern Afghanistan. That area is heavily infiltrated by the Haqqani network, which has deep links to al Qaeda. He has since appeared on videos posted on Taliban websites confirming his captivity.

CBS news analyst Jere van Dyk, who was held captive by the Taliban for 45 days, knows exactly what it feels like.

New York Times reporter David Rohde was also kidnapped in Logar province while trying to make contact with a Taliban commander. He and an Afghan colleague escaped in June 2009 after seven months in captivity, most of it spent in Taliban sanctuaries in Pakistan.

Hundreds of fliers, with reprinted photos of the two missing sailors, have been distributed throughout Logar province where NATO troops were stopping motorists, searching people, peering inside vehicles and searching trunks. The photographs show one clean-shaven sailor wearing a soft cap and another with short-cropped hair, wearing a blue civilian shirt and a white undershirt.

The fliers say: "This American troop is missing. He was last seen in a white Land Cruiser vehicle. If you have any information about this soldier, kindly contact the Logar Joint Coordination Center," run by coalition and Afghan forces. A phone number is listed along with information about a $20,000 reward being offered for information leading to their location.

"Our latest, accurate information reports are that they are still in the area," said Din Mohammed Darwesh, spokesman for the provincial governor of Logar.

He said the governor's office was upset because the two Americans left their base without notifying Afghan security forces in Logar, which is the normal protocol.

"This was an abnormal situation," Darwesh said.

The visiting chairman of the U.S. Joint Chiefs of Staff, Adm. Mike Mullen, told reporters Sunday that while he did not have all the details about the missing servicemen, "from what I know right now, this is an unusual circumstance."

Mullen said he could not comment on the Taliban claim that one American was killed and the other captured. He says the U.S. was doing all it could to "return to American hands anybody who has been captured or killed."

"There's a tremendous amount of effort going on to find them, to search, and beyond that I can't discuss any additional details at this time. "It serves to remind of the challenges that we have and also the service and sacrifice that so many make, but that's really all I can talk about."

The Afghan security official who spoke on condition of anonymity claimed that the body of one of the sailors was recovered Sunday in the village of Argan in Charkh district, but a NATO official said the coalition did not have confirmation of the status or condition of either of the two.

The NATO official, who spoke on condition of anonymity because he was not authorized to disclose the information, declined to say which base the two left from, or why they were traveling in Logar.

Samer Gul, the chief of Logar's Charkh district, said a four-wheel drive armored sports utility vehicle was seen Friday night by a guard working for the district chief's office. The guard tried to flag down the vehicle, carrying a driver and a passenger, but it kept going, Gul said.

The second group of Taliban tried to stop the vehicle, but when it didn't, insurgents opened fire and the occupants in the vehicle shot back, he said.

Gul said there is a well-paved road that leads into the Taliban area and suggested the Americans may have mistaken that for the main highway - which is much older and more dilapidated.

The security official in Logar said the Taliban fired AK-47s and machine guns at the sailors' armored vehicle and then struck the vehicle with a rocket-propelled grenade. The two then left the vehicle, and continued to return fire. The official said one sailor was killed and the other gave himself up.