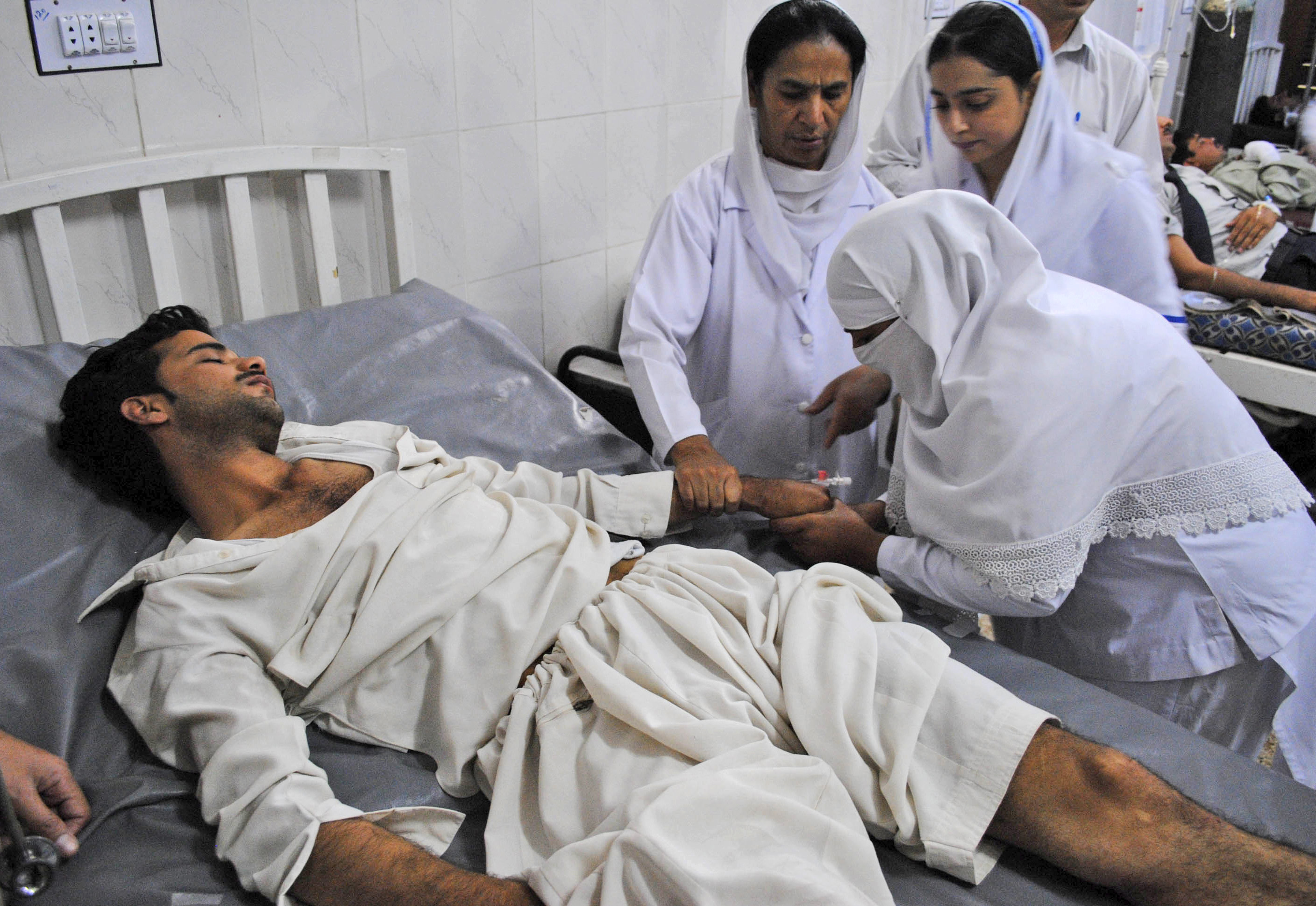 PESHAWAR, Pakistan - A Taliban car bomb struck an armored vehicle taking American government employees to the U.S consulate in northwest Pakistan on Friday, officials said, in a strike the militants said was in revenge for the raid that killed Osama bin Laden.

Two Americans suffered minor injuries, but one Pakistani passer-by was killed and at least 10 others were wounded in the attack in the city of Peshawar, officials said. The strike was the first on Westerners since the May 2 raid by American commandos on bin Laden's hide-out in an army town around three hours from Peshawar.

The Pakistani Taliban, an al Qaeda-allied group behind scores of attacks in recent years, claimed responsibility.

"We say to the Americans and NATO that we will carry out more deadly attacks and we can do it," Taliban spokesman Ahsanullah Ahsan said in a phone call from an undisclosed location. "We had warned that we will avenge the martyrdom of Osama."

The Americans were traveling in two cars from their homes to the heavily protected consulate building when a car bomb exploded nearby, said U.S. Embassy spokesman Alberto Rodriguez and police in the city. The Americans from the hit car were whisked away from the scene in the second vehicle. The most serious wound was a possible broken hand, he said.

Rodriguez had initially said Friday's attack was carried out by a suicide bomber, based on accounts from witnesses. He later called The Associated Press to say it was a planted explosive device of some kind. Pakistani police said it was a car bomb, presumably detonated remotely.

Rodriguez declined to say what job the Americans held. The consulate is home to diplomats, security contractors and — it is widely believed — CIA staff hunting al Qaeda and associated groups. Both the consulate building and a previous top officer there have been attacked in the past.

The unilateral U.S. raid that killed bin Laden in Abbottabad badly damaged Pakistani-American relations already frayed since January, when a CIA contractor killed two Pakistanis in the city of Lahore. The incident prompted Pakistan to demand a reduction in U.S. military personnel in the country, and infuriated the Pakistani army over what it claims are American spies operating in the country.

Peshawar lies just outside Pakistan's tribal regions, where al Qaeda and the Taliban have bases.

The city has witnessed many of the suicide and other bombings that have scarred Pakistan over the past five years, the vast majority against Pakistani government and security force targets. Foreigners in Pakistan have also been targeted, but not nearly as much.

Last week, the Pakistani Taliban killed more than 80 Pakistani recruits for a paramilitary border force in double suicide attacks close to Peshawar. They said those blasts were also in revenge for the death of bin Laden.

Pakistani TV footage showed that the car that was hit was a large, sport utility vehicle. It appeared to have veered into a pole and the hood was damaged. Nearby buildings were also damaged in the blast.

In August 2008, Lynne Tracy, then the top U.S. diplomat at the consulate, survived a gun attack on her armored vehicle. In April last year, militants used car bombs and grenades to strike the consulate, killing eight people. None of the dead were U.S. citizens, but several were security guards working for the consulate.

Pakistan is angry it was not warned in advance that the Navy SEALs team would storm bin Laden's compound, and insists it had no idea the terror mastermind was hiding there. U.S. officials have visited Pakistan in recent days to try to patch up differences, and assure Pakistan's continued cooperation in the battle against al Qaeda and allied Islamist militant groups.

One topic likely under intense discussion was the issue of U.S. drone-fired missiles on militants hiding in Pakistan's tribal areas. Pakistan publicly denounces the attacks, but U.S. diplomatic cables released recently by WikiLeaks indicate that in private, Pakistan's civilian leaders back the missile strikes.

Accounts of U.S. diplomatic cables showing there is some private support for the strikes among Pakistan's military leaders, dating back to 2008, were published Friday by the English-language Dawn newspaper in Pakistan.

The accounts describe meetings between U.S. officials and Pakistani leaders that year. In one, then-U.S. Ambassador to Pakistan Anne Patterson wrote that Pakistani army chief Gen. Ashfaq Parvez Kayani requested "continuous Predator coverage of the conflict area" in South Waziristan, where the military was moving against insurgents.

Although the paper said "Predator coverage" could imply surveillance drones as opposed to missile-armed ones, it said the response by the American officials suggested the Pakistanis were looking for U.S. strikes.

In a statement about the newspaper report, the Pakistani army said on Friday it had never requested U.S. armed drones be used to aid its operations.

The latest strike took place Friday in the North Waziristan tribal region, killing four people traveling in a vehicle, according to Pakistani intelligence officials. They did not give their names because they were not authorized to do so by their agency.

The officials did not identify the victims — as is common — and the region is too dangerous for even Pakistani journalists to visit. U.S. officials do not speak about the CIA-run program.