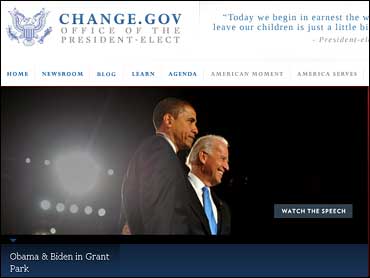 President-elect Barack Obama's transition team announced Friday that all policy documents from official meetings with outside organizations will be made publicly available on the transition Web site on Change.gov.

The site's Your Seat at The Table page allows visitors to download PDF files of the documents, as well as leave comments about them or upload one's own materials for the transition team to review. The page is searchable by keyword.

"This means we're inviting the American public to take a seat at the table, and engage in a dialogue about these important issues and ideas," Dan McSwain wrote on the Change.gov blog. He called it "a bold move towards opening the doors and ensuring access to government processes."

As of Monday morning, 16 documents had been posted, including the report Transition to Green (pdf) from a coalition of national environmental and conservation organizations, and U.S. PV R&D Program: A University Perspective (pdf) prepared by the Council for Photovoltaic Research.

Hundreds of comments have been left so far, and the transition team reviews "everything that's posted on our Web site," Michael Strautmanis, director of public liaison and intergovernmental affairs, said in a video on the Change.gov blog.

In Martine Rothblatt's new book "Virtually Human," she is challenging the limits of human life
Thanks for reading CBS NEWS.
Create your free account or log in
for more features.
View CBS News In
CBS News App Open
Chrome Safari Continue
Be the first to know
Get browser notifications for breaking news, live events, and exclusive reporting.