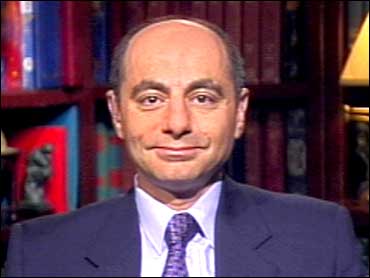 The Bush administration continues to turn up the heat on Syria, with Secretary of State Colin Powell now saying he intends to travel to Damascus to confront the Syrians face-to-face.

The White House has accused the country of aiding Iraqi troops, providing sanctuary to top members of Saddam's government, and of possessing chemical weapons.

When asked by The Early Show co-anchor Harry Smith if the accusations are true, Imad Moustapha, Syria's Deputy Ambassador to the United States, prefaced his answer by pointing out Syria's stated desire to work with the United States.

"First, let me say to you that yesterday (Wednesday) was a good day for relations between America and Syria. Yesterday, instead of having to repeatedly refute all those accusations, we felt fed up, and we went to the Security Council, and we proposed a resolution, a U.N. Security Council resolution, in which we are to free the whole Middle East of all weapons of mass destruction. All weapons.

"And this is a win-win situation for Syria. If this resolution passes, then we have nothing to lose, and other countries in the Middle East with the largest stockpile of all sorts of weapons of mass destruction will be upset," he said.

When pressed to answer the question, Moustapha said he was answering the question, noting that if the United States refuses to allow this resolution to pass, then Syria would be exonerated at last.

He also pledged continued cooperation with the U.S., adding, "We will work with Colin Powell in Damascus."

When asked if what has happened to Iraq has inspired his country to get out of the terrorism business, Moustapha asked to stop the "negative campaign."

"Please stop this negative campaigning against Syria. This is unfair, and this is untrue. What we want to do is to see our region really peaceful, and solve our problems. We don't want more inflaming of this region.

"Isn't this enough? Isn't one war after another enough? Syria has strategically opted for a peaceful resolution of the Middle East conflict. This is what we want. Please stop the negative campaigning against Syria."

"Listen, only three days ago everybody was talking about Syria's chemical arsenal. And once we went to the United Nations and said, 'Come on, let's free the whole Middle East of every weapon of mass destruction today,' nobody in the United States is mentioning this. But we do not want to just spend day in, day out with accusations and counteraccusations. Let's move forward to a constructive, diplomatic relation. This is a time for reason, and a time when good intentions should prevail," Moustapha said.

Smith then asked what his country's reaction is to having the oil pipeline cut off. On Tuesday, Defense Secretary Donald H. Rumsfeld said the United States was moving to cut off an important oil pipeline running from Iraq into Syria, the first major economic penalty against Syria.

Moustapha said, "Let me answer this. You are saying that you are going to liberate Iraq, not to occupy it. Very good, which means Iraq eventually will have its own, free government. This is wonderful for us. We have always had excellent relations with the Iraqi people. We never had any good relations with the Saddam regime. This is one known fact that is trying to be hidden by the U.S. media.

"Now, if this is what will happen, if Iraq will eventually have a free government, we are very happy. We will deal with whatever happens in Iraq. We are very constructive in our approach towards the future of Iraq. And this is something to be discussed between two sovereign states, Iraq and Syria."