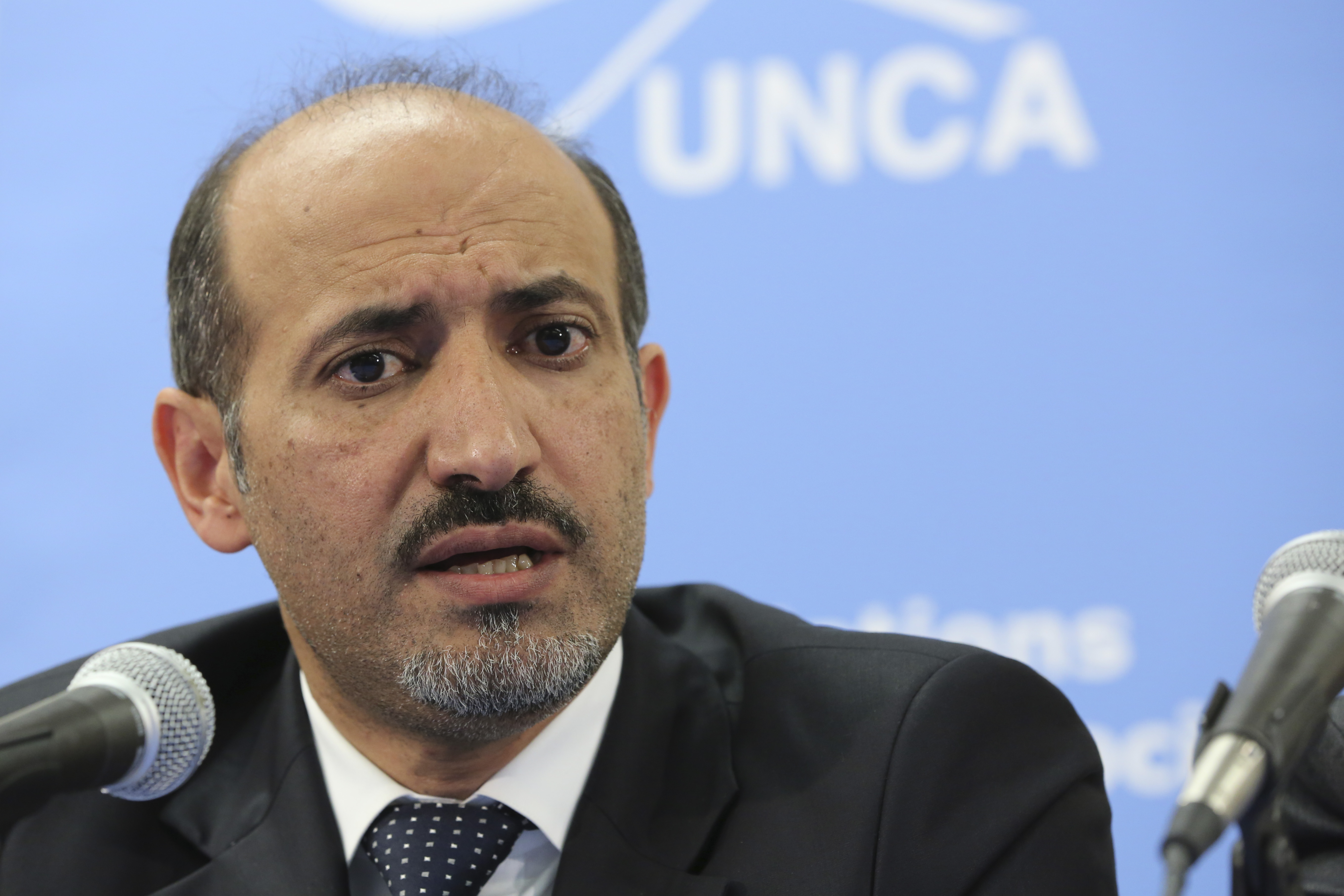 UNITED NATIONS Syria's Western-backed opposition group told the U.N. Security Council on Friday that it is ready to attend a peace conference if the Syrian government makes a commitment to implement a plan that requires President Bashar Assad to hand over power to a transitional government.

Ahmed al-Jarba, president of the Syrian National Coalition, said he stressed to council members that the opposition needs "far more international pressure to force the Assad regime to accept a political transition."

Otherwise, he warned, "the regime will never step down, and its violent repression will continue."

Al-Jarba called the situation in the country "desperate" and said he told the council that while the opposition supports peace efforts, it must have the right to self-defense as long as the Assad regime is waging war.

The informal meeting was the first between leaders of the coalition and the U.N.'s most powerful body, which has been paralyzed by divisions between the West and Russia and unable to take any action to end the 2-and-a-half-year conflict.

"Ahmad al-Jarba, the President of the National Coalition of the Syrian Revolution and Opposition Forces gave U.S. Secretary of State John Kerry what he needed, that is, an announcement by the opposition that it is ready to attend peace talks," reported CBS News' Pamela Falk, who presided at their press conference, "and, although there were conditions that they wanted met, they were all within the framework agreed to in Geneva."

"The significance of the trip to the U.N. cannot be underestimated," Falk reported, "because few people in the international community had heard much from the Syrian National Coalition, and they were able to present their side of the conflict."

The closed-door session took place as Assad's forces are in the middle of a major offensive to recapture rebel areas. The death toll in the conflict has topped 100,000, the number of refugees and internally displaced people is growing, and outside fighters and extremists from Hezbollah, Iran and elsewhere have entered the fighting.

For the last three months, al-Jarba said, Assad has only targeted areas under control of the Free Syrian Army — not areas controlled by the al Qaeda-linked Nusra Front and other extremists — which makes the coalition think there is an agreement between the regime and the extremists, who are becoming stronger.

With the government getting support now from Hezbollah and Iranian extremists, al-Jarba said, "the game has changed" and the Free Syrian Army has adopted a new strategy, which he did not disclose.

"We think that within one month you will see a lot of changes on the ground," he said.

The United States, which supports the opposition, and Russia, which supports the Assad government, are trying to convene a new conference in Geneva to try to get both sides to implement a plan adopted in the Swiss city a year ago. It calls for the establishment of a transitional governing body vested with full executive powers.

Al-Jarba told reporters the Assad regime has made a lot of statements saying there can be no transitional government with full executive authority. He added that the opposition has information that Russia is trying to keep the military and intelligence outside of any negotiations.

The Security Council must require all participants at a new Geneva conference to make a commitment to implement the June 2012 Geneva communique and form "a national transitional government with full executive authority, including in the military and security sectors," he said.

When the Assad government makes "this commitment," al-Jarba said, "we are ready to go to Geneva."

"If they refuse, the Security Council should impose targeted sanctions to force them to comply," he said.

Russia's U.N. Ambassador Vitaly Churkin said "clearly there are still some obstacles to be overcome for the Geneva 2 conference to be convened."

But he added, "There are good chances that the Geneva 2 will be convened because the alternative would be so horrifying."

Churkin said one obstacle is that the opposition is "not entirely ready yet in terms of a joint unified delegation." Al-Jarba disagreed, saying the coalition has been expanded to include the Free Syrian Army and all political and revolutionary armed forces inside the country.

Leaders of the coalition were invited to Friday's meeting with the council by Britain's U.N. Ambassador Mark Lyall Grant. He said afterward it was "a free and frank exchange" that covered a wide range of issues including how to end the violence, access to Syria for humanitarian workers, refugees and the alleged use of chemical weapons.

Lyall Grant said al-Jarba condemned extremism, rejected terrorism and "made a very strong statement of commitment to the unity of Syria, to democracy and to plurality" and to implement last year's Geneva communique.

"The exact timing of Assad's departure was not discussed, but he believes clearly, as we do, that the Geneva communique makes clear that when there is a political transition, with a transitional government by mutual consent that has full executive powers, that Assad wouldn't be playing any role in that body," Lyall Grant said.