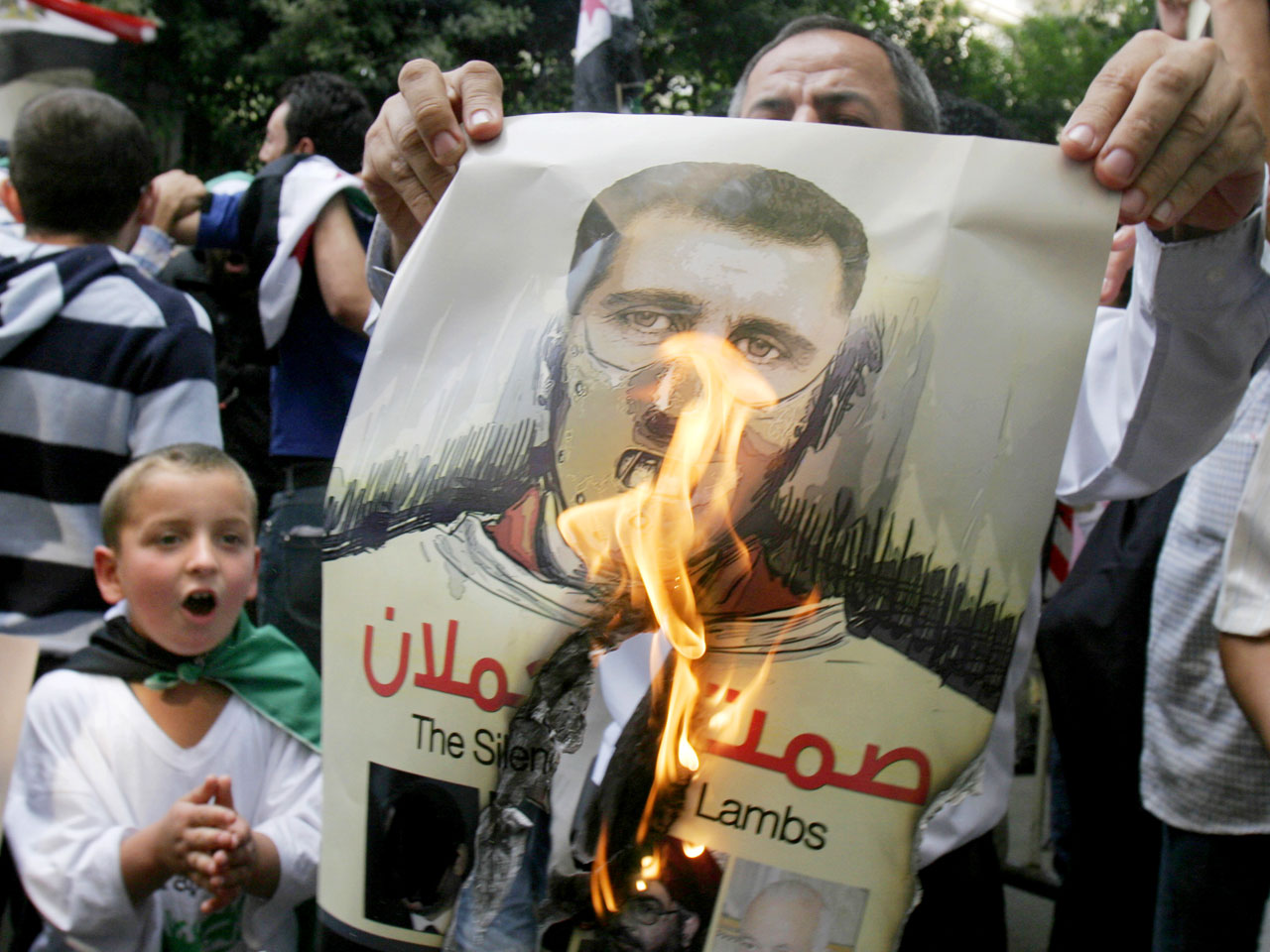 BEIRUT - Syrian President Bashar Assad warned against Western intervention in his country's 7-month-old uprising, saying such action would trigger an "earthquake" that "would burn the whole region."

Assad comments, published in an interview with Britain's Sunday Telegraph, were made against a backdrop of growing calls from anti-regime protesters for a no-fly zone over Syria and increasingly frequent clashes between government troops and army defectors, the latest of which left at least 30 troops dead Saturday.

"Syria is the hub now in this region. It is the fault line, and if you play with the ground you will cause an earthquake," Assad said. "Do you want to see another Afghanistan, or tens of Afghanistans?"

Assad's remarks appeared to reflect his regime's increasing concern about foreign intervention in the country's crisis after the recent death of Libyan dictator Moammar Gadhafi, who was toppled by a popular uprising backed by NATO airstrikes.

Syrian opposition leaders have not called for an armed uprising like the one in Libya and have for the most part opposed foreign intervention, and the U.S. and its allies have shown little appetite for intervening in another Arab nation in turmoil. But with the 7-month-old revolt against Assad stalemated, some Syrian protesters have begun calling for a no-fly zone over the country because of fears the regime might use its air force now that army defectors are becoming more active in fighting the security forces.

The British-based Syrian Observatory for Human Rights said a clash Saturday night in the restive central city of Homs between soldiers and gunmen believed to be army defectors left at least 20 soldiers dead and 53 wounded. It also said gunmen ambushed a bus carrying security officers late Saturday in the northwestern province of Idlib, killing at least 10 security agents. One attacker was also killed.

The Associated Press could not verify the activists' accounts. Syria has banned most foreign media and restricted local coverage, making it impossible to get independent confirmation of the events on the ground. Syria's state-run news agency SANA, said seven members of the military and police, who were killed in Homs and the suburbs of Damascus were buried Sunday.

The Local Coordination Committees, another activist group, said Sunday that 343 people, including 20 children, have been killed in Syria since Oct. 16, when the Cairo-based Arab League gave Damascus a 15-day deadline to enact a cease-fire. A meeting was scheduled for later Sunday in Qatar between an Arab committee set up by the 22-member Arab League and a Syrian delegation expected to be headed by Foreign Minister Walid al-Moallem.

The unrest in Syria could send unsettling ripples through the region, as Damascus' web of alliances extends to Lebanon's powerful Hezbollah movement, the militant Palestinian Hamas and Iran's Shiite theocracy.

Unlike Gadhafi, Assad enjoys a number of powerful allies that give him the means to push back against the outside pressure. A conflict in Syria risks touching off a wider Middle East conflict with arch foes Israel and Iran in the mix. Syria wouldn't have to look far for prime targets to strike, sharing a border with U.S.-backed Israel and NATO-member Turkey.

In case of an international intervention, Assad and his main Mideast backer, Iran, could launch retaliatory attacks on Israel or -- more likely -- unleash Hezbollah fighters or Palestinian militant allies for the job. To the north, Turkey has opened its doors to anti-Assad activists and breakaway military rebels, which also could bring Syrian reprisals.

The uprising against the Syrian regime began during a wave of anti-government protests in the Arab world that toppled autocrats in Tunisia, Egypt and Libya. The U.N. says that Assad's crackdown has left more than 3,000 people dead since the uprising began in mid-March.

Facing an unprecedented threat to his rule, Assad is desperate to show that only he can guarantee security in a troubled region where failed states abound.

In a show of support to Assad's regime, thousands of Syrians carrying the nation's flag and Assad posters rallied Sunday in a major square in the southern city of Sweida, some 70 miles (110 kilometers) south of Damascus, near the Jordanian border. There have been two similar massive pro-Assad demonstrations in recent days in the capital Damascus and the coastal city of Latakia.

Assad said that Western countries "are going to ratchet up the pressure, definitely." He was apparently referring to a wave of sanctions that were imposed by the European Union and the U.S.

"But Syria is different in every respect from Egypt, Tunisia, Yemen. The history is different. The politics is different," Assad said.

The Syrian president described the uprising as a "struggle between Islamism and pan-Arabism." He was referring to his ruling Baath party's secular ideology and the Muslim Brotherhood that was crushed by his regime in 1982.

"We've been fighting the Muslim Brotherhood since the 1950s and we are still fighting with them," Assad said.

Assad also spoke to Russia's state Channel One television, and in an interview broadcast Sunday hailed Moscow's veto of a European-backed U.N. Security Council resolution on Syria that aimed to impose sanctions on Damascus.

"We are relying on Russia as a country with which we have strong historic ties," Assad said.

The measure vetoed by Russia and China earlier this month would have been the first legally binding resolution against Syria since Assad's forces began attacking civilian protesters.