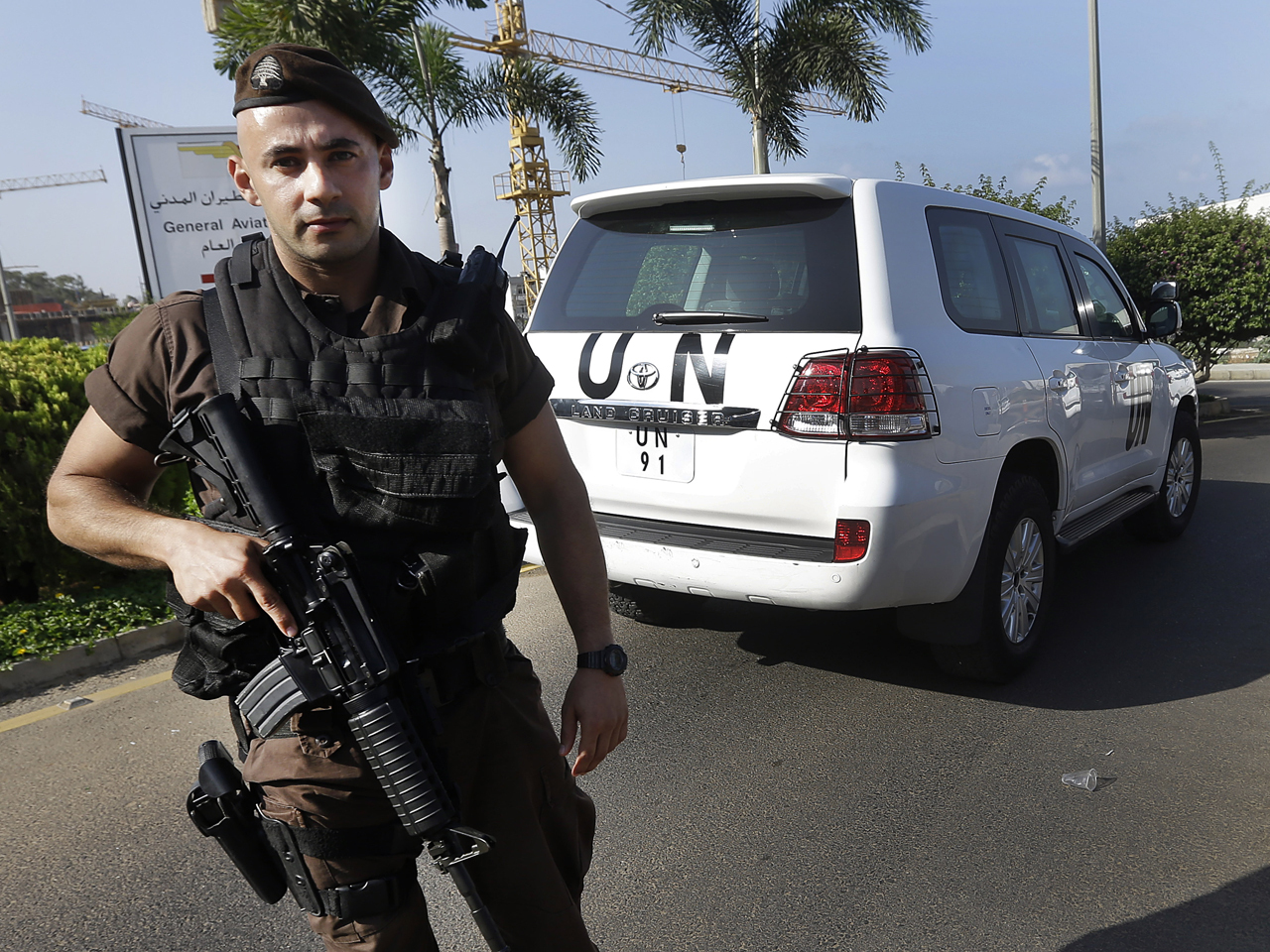 DAMASCUS, Syria The last of the U.N. weapons inspection team pulled out of Syria before dawn Saturday after four days of field work visiting the suburbs of Damascus hit by what appears to have been chemical strikes on Aug. 21, CBS News correspondent Elizabeth Palmer reported from Damascus on "CBS This Morning: Saturday."

The samples they gathered from victims of the attack, as well as water, soil and shrapnel, will now be sent to European laboratories for analysis. The results, and the inspectors' final report, could take as long as two weeks.

But international politics are moving faster than that. On Saturday, Syria's international ally, Russia, weighed in. President Vladimir Putin asked the U.S. to refrain from carrying out any strikes on Syria and suggested that next week's G20 meeting would be a good venue for international discussion on what to do.

Putin said that the idea that the Syrian government would use chemical weapons when it was already winning the war was utter nonsense.

After U.S. Secretary of State John Kerry laid out the Obama administration's case Friday that the regime of Bashar Assad used chemical weapons on civilians, the Syrian government reacted with what could be characterized as distain and denial, Palmer reports.

No politician appeared on television in Syria officially responding to the U.S. case; however, a statement from the regime's Foreign Ministry called the increased death toll to 1,429 civilians killed, which Kerry announced Friday, "an illusion," Palmer reports.

The U.N. experts crossed into neighboring Lebanon early Saturday, departing hours after President Obama said he is weighing "limited and narrow" action against a Syrian regime that the administration has accused of launching the deadly attack.

The United Nations has said it will try to expedite its final report, and U.N. disarmament chief Angela Kane is to brief Secretary-General Ban Ki-moon later Saturday on the investigation.

With the inspectors now out of Syria, the looming confrontation between the U.S. and President Bashar Assad's regime moves one step closer to coming to a head. Most observers viewed U.S. military action as unlikely while the U.N. team was still on the ground inside Syria, but the American administration has made clear that it is confident in its assessment and could act before the United Nations releases the results of its probe.

Mr. Obama has said that if he opts for a military strike, any operation would be limited in scope and only aimed at punishing Assad for his alleged use of chemical weapons.

In Washington, most leaders of the relevant national security committees on Capitol Hill support limited strikes and say the president can't erase the red line he drew. Still, many members want any military action to be put to a vote first.

But U.S. action carries the potential to trigger retaliation by the Syrian regime or its proxies against U.S. allies in the region, such as Jordan, Turkey and Israel. That would inject a dangerous new dynamic into a Syrian civil war that has already killed more than 100,000 people, forced nearly 2 million to flee the country and inflamed sectarian tensions across the Middle East.

While Mr. Obama has long been wary of U.S. military involvement in the conflict, the administration on Friday forcefully made its case for action against Syria in the wake of last week's events outside Damascus.

With France as his only major public ally, Mr. Obama told reporters he has a strong preference for multilateral action.

"Frankly, part of the challenge we end up with here is a lot of people think something should be done but nobody wants to do it," he said.

The U.S. already has warships in place in the eastern Mediterranean Sea near Syria's coastal waters. The vessels are armed with cruise missiles, long a first-line weapon of choice for presidents because they can strike distant targets without need of air cover or troops on the ground.

The Syrian government dismissed the administration's claims as "flagrant lies" akin to faulty Bush administration assertions before the Iraq invasion that Saddam Hussein had weapons of mass destruction. The Foreign Ministry statement read on state TV late Friday said that "under the pretext of protecting the Syrian people, they are making a case for an aggression that will kill hundreds of innocent Syrian civilians."

In Damascus, residents braced themselves in anticipation of strikes.

"We are anticipating it starting tonight, since the inspectors have left, but we don't really know," said Nour, who lives on the outskirts of Damascus.

"Just in case, we stocked up on some water and food. Our building has a basement that we can use as a shelter. The building supervisor started preparing it a couple of days ago, he cleaned it and we put some pillows, blankets, water and a first aid kit with basic medications," she added. She gave only her first name for security reasons.

Syrian state TV on Saturday morning broadcast footage of Syrian soldiers training, fighter jets soaring in the sky and tanks firing at unseen targets, all to the backdrop of martial music. The station's morning talk shows were dominated by discussions about a potential U.S. military strike.

Mr. Obama met with his national security aides at the White House on Friday and then with diplomats from Baltic countries, saying he has not yet made a final decision on punitive strikes.

But the administration did nothing to discourage the predictions that action was imminent. That impression was heightened both by sharply worded remarks from Kerry and the release of an unclassified intelligence assessment that cited "high confidence" that the Syrian government carried out the attack.

In addition to the dead, the assessment reported that about 3,600 patients "displaying symptoms consistent with nerve agent exposure" were seen at Damascus-area hospitals after the attack.

In his remarks, Kerry added that "a senior regime official who knew about the attack confirmed that chemical weapons were used by the regime, reviewed the impact and actually was afraid they would be discovered."

The assessment did not explain its unexpectedly large count of 1,429 deaths, far in excess of an estimate from Doctors Without Borders from earlier this week that put the toll at 355. Not surprisingly — given the nature of the disclosure — it also did not say expressly how the United States knew what one Syrian official had allegedly said to another.

Mindful of public opinion, Kerry urged Americans to read the four-page assessment for themselves. He referred to Iraq — when Bush administration assurances that weapons of mass destruction were present proved false, and a U.S. invasion led to a long, deadly war. Kerry said this time it will be different, and that "we will not repeat that moment."

Citing an imperative to act, the secretary of state said "it is directly related to our credibility and whether countries still believe the United States when it says something. They are watching to see if Syria can get away with it because then maybe they, too, can put the world at greater risk."

While Mr. Obama was having trouble enlisting foreign support, French President Francois Hollande was an exception. The two men spoke by phone, then Hollande issued a statement saying they had "agreed that the international community cannot tolerate the use of chemical weapons, that it must hold the Syrian regime responsible and send a strong message to denounce the use of (such) arms."

Mr. Obama has long been wary of U.S. military involvement in Syria's civil war, as he has been with tumultuous events elsewhere during the so-called Arab Spring. In the case of Syria, his reluctance stems in part from recognition that while Assad has ties to Iran and the Lebanese militant group Hezbollah, the rebels seeking to topple him have connections with al Qaeda-linked groups.

Still, Mr. Obama declared more than a year ago that the use of chemical weapons would amount to a "red line" that Assad should not cross. And Mr. Obama approved the shipment of small weapons and ammunition to the Syrian rebels after an earlier reported chemical weapons attack, although there is no sign the equipment has arrived.