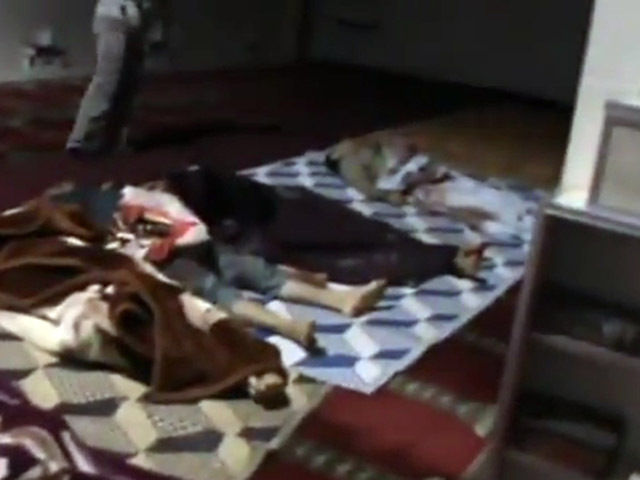 (AP) DAMASCUS, Syria - The Syrian government denied Sunday its troops were behind an attack on a string of villages that left more than 90 people dead, blaming the killings on "hundreds of heavily-armed gunmen" who also attacked soldiers in the area.

Friday's assault on Houla, an area northwest of the central city of Homs, was one of the bloodiest single events in Syria's 15-month-old uprising. The U.N. says 32 children under 10 were among the dead. The international body and others have issued statements appearing to hold the Syrian regime responsible.

Foreign Ministry spokesman Jihad Makdissi told reporters in Damascus at a news conference that Syria is being subjected to a "tsunami of lies" on Houla. "We categorically deny the responsibility of government forces for the massacre," Makdissi said.

Makdissi said a committee was set up to investigate the incident and results should be out within three days. He added that U.N. envoy Kofi Annan will be in Syria on Monday.

The attacks sparked outrage from American and other international leaders, and renewed concerns about the relevance of a month-old international peace plan that has not stopped almost daily violence.

U.N. observers, among more than 250 who were dispatched in recent weeks to salvage the cease-fire plan, found spent artillery and tank shells at the site Saturday — a finding which would point toward the government's heavily-armed mechanized units.

"Those who use violence for their own agenda will create more instability, more unpredictability and may lead the country to civil war," warned the observers' chief Maj. Gen. Robert Mood in a statement.

Makdissi however said "hundreds of heavily-armed gunmen carrying machineguns, mortars and anti-tank missiles" launched the attack, that started at about 2 p.m. and lasted nine hours, simultaneously from several locations. He added that five army positions in the area came under attack at the same time leaving three soldiers dead and 16 wounded.

"There were no Syrian tanks or artillery in the vicinity" of Houla, Makdissi said. He added that gunmen used anti-tank missiles and "Syrian troops retaliated in defense of their positions."

Kuwait, which currently heads the 22-member Cairo-based Arab League, announced it is calling for an Arab ministerial meeting that aims to "take steps to put an end to the oppressive practices against the Syrian people."

An unnamed foreign ministry official was quoted by Kuwait's official news agency, KUNA, as condemning the attack in Houla and blamed regime forces for the "ugly crime." The official said Kuwait is making contacts so that the international community can "assume its responsibilities to stop the blood shedding of Syrian brothers."

The U.N. had denounced the attacks in a statement that appeared to hold President Bashar Assad's regime responsible, and the White House called the violence acts of "unspeakable and inhuman brutality." Syria blames armed "terrorist groups."

"Children, women and other innocent people were killed in their homes and this is not what the Syrian army does," Makdissi said. "The method of killing was brutal."

The bloodshed is yet another blow to the international peace plan brokered by Annan and cast a pall over his coming visit to check on the plan's progress. The cease-fire between forces loyal to the regime of Assad and rebels seeking to topple it was supposed to start on April 12 but has never really taken hold, with new killings every day.

The U.N. put the death toll weeks ago at more than 9,000. Hundreds have been killed since.

The shelling hit neighborhoods in the central city of Hama and the rebel-held town of Rastan north of Homs, the Local Coordination Committees and the Britain-based Syrian Observatory for Human Rights said.

The two groups also reported clashes between troops and rebels in Hama, in the Damascus suburb of Harasta and in the capital's central Midan district. They said a bomb struck a security vehicle in the capital's upscale district of Mazzeh — near a military airport, according to the LCC.

The Observatory said the vehicle bombing caused casualties but did not have other details on the dead or wounded from the day's violence.

A video posted online by activists showed thick black smoke billowing from what it said was Mazzeh.

Damascus is tightly controlled by regime forces but has been hit by a wave of blasts over recent months that claimed the lives of scores of people. Most of the blasts have targeted Syrian security agencies.