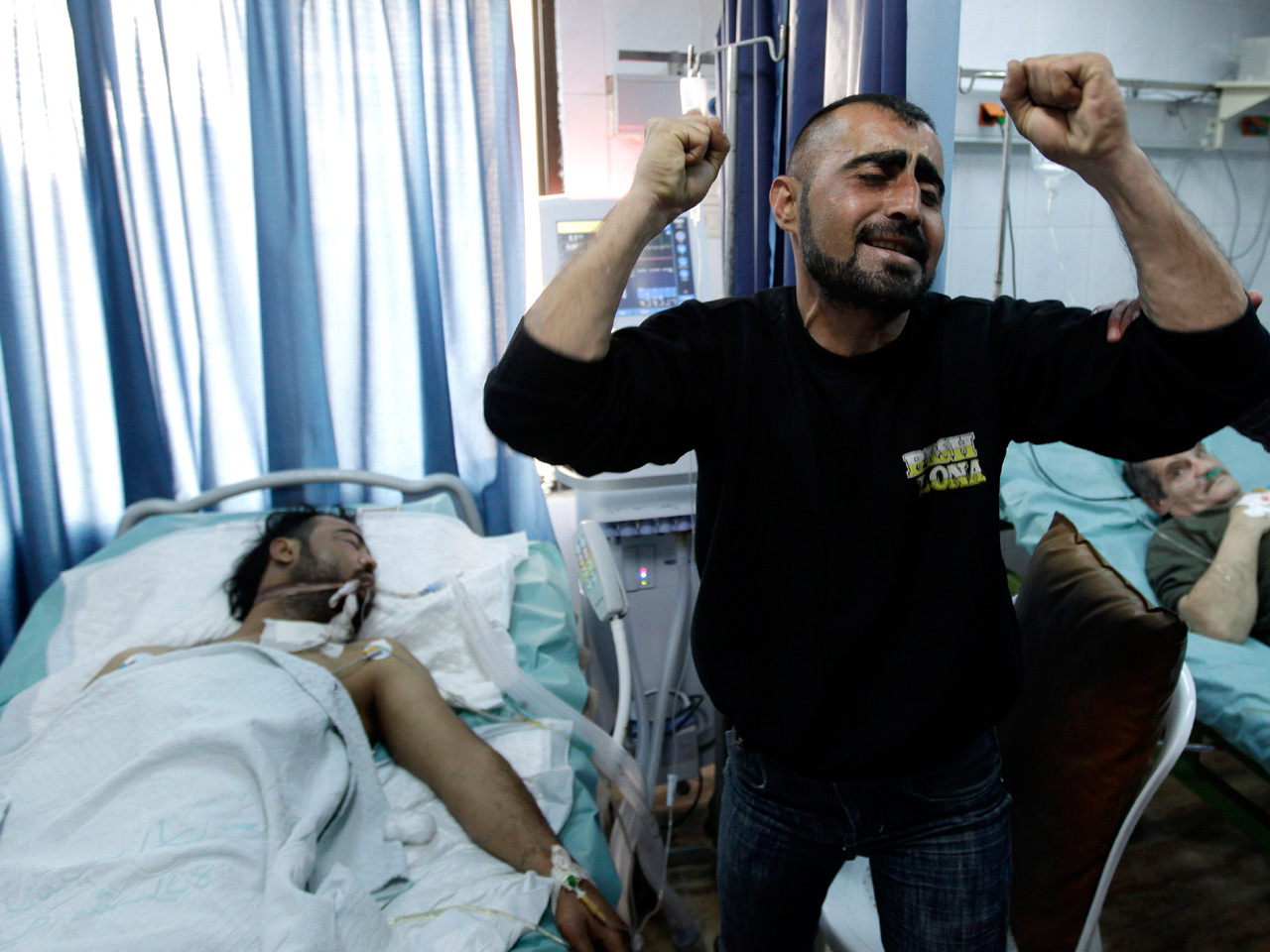 BEIRUT - The death toll from Syria's crackdown on a 9-month-old uprising has exceeded 5,000 people, the top U.N. rights official said Monday, as Syrians closed their businesses and kept children home from school as part of a general strike to pressure President Bashar Assad to end the bloodshed.

Navi Pillay, the U.N. High Commissioner for Human Rights, said at least 300 children are among those killed in the Assad regime's attempts to stamp out the revolt, and that thousands of people remain in detention.

Speaking at the United Nations, Pillay said she told Security Council members of the increase in deaths during an afternoon briefing, and said she recommended that the council refer Syria to the International Criminal Court, the permanent war crimes tribunal, for investigation of possible crimes against humanity.

U.S. Ambassador to the U.N., Susan Rice, said Pillay's briefing "underscores the urgency of the present moment," and urged the U.N. Security Council to take concrete steps to bring the violence to an end.

Bensouda, who will take up her new position in six months, told CBS News on Monday that the ICC cannot act on Syria without a referral from the Security Council because Syria is not a state party.

In the case of Libya, Bensouda said, the ICC acted on a referral when it issued an arrest warrant for Muammar Qaddafi because there was consensus on the Council and, regardless of the reports of the High Commissioner for Human Rights, Russia and China continue to block any action on Syria.

CBS News foreign affairs analyst Pamela Falk says the U.N. remains deadlocked on Syria, and the Syrian regime feels protected from the international community by Russia, which maintains important naval bases in Syria. Assad knows the U.S. and NATO are loath to act militarily without the U.N. authorization. Russia even sent warships to Syria three weeks ago in a show of military force intended to forestall any NATO military action, notes Falk.

The only reason the U.N. human rights chief was able to brief the Security Council on Syria about the dramatic increase in civilian deaths, was because France threatened to call a procedural vote after Russia scoffed at the idea of a briefing, says Falk, "so the Council is a long way from action, unless some seriously diplomatic action takes place behind the scenes."

Dimming hopes for such a diplomatic breakthrough, Russia's foreign minister on Tuesday angrily accused the West of taking an "immoral" stance on Syria by pressuring Assad while refusing to condemn violence by what he called "armed extremist groups" trying to oust the Arab strongman.

Sergey Lavrov also rebuffed calls on Moscow to back sanctions against Syria. He did, however, back the Arab League's push to send observers to the country, which some fear is on the verge of civil war.

Russia has had strong ties with Syria since Soviet times, supplying it with weapons and gaining a conduit for influence in the Middle East.

Assad has shown no sign of easing his crackdown, despite mounting international pressure, including a recent spate of economic sanctions from the EU, the Arab League and Turkey, that are punishing the Syrian economy, a dangerous development for the government in Damascus.

Arab satellite news channel Al Jazeera reported Tuesday that another 15 people had been killed by Assad's security forces, according to activists, including 11 in the region of Idlib.

Now, the open-ended strike by Syrian businesses also takes direct aim at Syria's already ailing economy. It is designed to erode Assad's main base of support — the new and vibrant merchant classes who have benefited in recent years as the president opened up the economy.

If the economy continues to collapse, Assad could find himself with few allies inside the country, where calls are growing by the day for him to step down. The authoritarian president is already struggling under international isolation and suffocating sanctions.

It is difficult to gauge the strength of the strike because the regime has banned most foreign journalists and prevented local reporters from moving freely. But there were signs it was being widely observed in particular in centers of anti-government protest: the southern province of Daraa, the suburbs of the capital, Damascus, the northwestern region of Idlib and in the restive city of Homs.

Further evidence of both the brutal crackdown, and the economic malaise gripping Syria, came from the direct account of CBS News correspondent Clarissa Ward, who snuck into the closed nation posing as a tourist and then linked up with opposition activists at the end of November.

Ward found a Syrian capital full of market traders longing for the days when drones of tourists flocked to their stalls, and that was before the general strike began.

Sneaking into Syria
Video: A rare look inside the Syrian revolution
Inside Syria: Defiance and fear

The opposition wants the strike to remain in force until the regime pulls the army out of cities and releases thousands of detainees.

"Only bakeries, pharmacies and some vegetable shops are open," said one resident of Homs who asked that his name not be published for fear of reprisals. He said those stores stayed open because they sell essential goods.

In addition to the strike, he said, security was tight in Homs on Monday with agents deployed at every intersection. The crackle of gunfire erupted sporadically.

"There is a terrifying security deployment in Homs," he said.

Activists said a new round of clashes between Syrian troops and army defectors began Sunday with a major battle in the south and spread to new areas Monday, raising fears the conflict is spiraling toward civil war.

The British-based Syrian Observatory for Human Rights says new clashes between soldiers and defectors were reported Monday in Idlib in the north, and that fighting continued for a second day in southern Daraa province. Four members of the security forces were killed as a result of the clashes there, the Observatory said. A day earlier, army defectors set several military vehicles ablaze in a prolonged battle in Daraa province.

At least 16 people were reported killed nationwide on Monday, most of them in Homs, according to various activist networks.

Late Monday, assailants blew up a pipeline in the Homs village of Saan that transports natural gas from Egypt to Syria, according to a security official who spoke on condition of anonymity because he was not authorized to brief the media. It was not immediately clear who was behind the attack.

The uprising has grown increasingly violent in recent months as defecting soldiers fight back against the army and once-peaceful protesters take up arms to protect themselves against the military assault.

The revolt has raised concerns of a regional conflagration, given Syria's strategic importance in the Middle East with alliances in Iran and with the Shiite militant group Hezbollah in Lebanon.

Amid the violence, the government pushed ahead with municipal elections that the opposition has dismissed as a meaningless concession that falls far short of their demands for Assad to give up power.

Witnesses said turnout was low. The opposition does not consider the vote a legitimate concession by the regime because it coincides with the deadly crackdown on anti-government protesters. The regime had touted the vote as a reform measure because some new rules were introduced recently allowing more people to run in the election.

"The number of voters is very small," said Mohamed Saleh, an activist in Homs. He said security in the city was very tight and people were too scared to go out. "Even in normal days, people did not give much attention to municipal elections," he said.

Since the uprising began, Assad has made several gestures of reform. But after nine months, the opposition is demanding nothing less than the downfall of the regime.

As the violence continues, there are fears that the conflict could morph into a civil war and exacerbate long-standing sectarian tensions.

Syria is overwhelmingly Sunni Muslim, but Assad and the ruling elite belong to the tiny Alawite sect, which accounts for about 10 percent of the population.

The political domination by Alawites has bred seething resentments, which Assad tried to tamp down by enforcing the strictly secular ideology of his Baath Party.

But as the popular uprising surged, and Sunni army conscripts refused to fire on civilians, Assad called heavily upon his Alawite power base to crush the resistance, feeding sectarian tensions of the kind that fueled civil wars in neighboring Iraq and Lebanon.