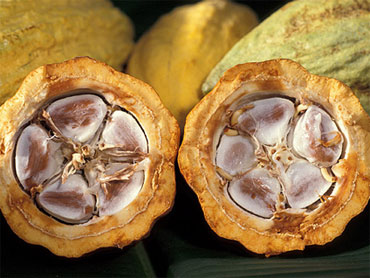 Some sweet science news: Researchers have released a nearly complete preliminary mapping of the DNA of the tree that produces chocolate.

The project to map the cacao genome was funded by candy maker Mars Inc. It finished the sequence just two years into what was supposed to be a five-year project.

Mars, the maker of Snickers, M&Ms and other candies - says it hopes the results could someday lead to more robust, higher-yielding and drought- and disease-resistant trees.

Mars will have spent $10 million on the project by the time it's complete. It worked with partners from the U.S. Department of Agriculture, IBM and researchers at universities across the country.

Scientists and the industry have been given a push by the growing worldwide demand for cacao, which now esceeds production. At the same time, researchers have been working on finding ways to help cacao trees resist funguses and pests while increasing yields. Fungal disease accounts for an estimated loss of $700 million to the annual cacao crop. That particularly hits home in west Africa, which produces some 70% of the world's supply.

The announcement of the successful sequencing of cacao's genome is seen as a big step toward the creation of a picture of the plant's genetic makeup. That, in, turn, is expected to shed light on the connection between genes and traits, helping scientists learn more about a plant's health and viability.