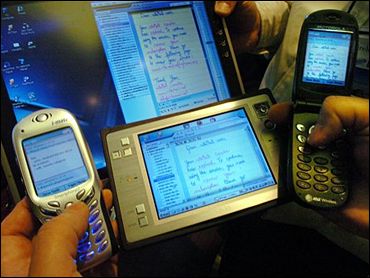 Businesses in Sweden, Ireland and Britain top the list when it comes to the use of information technology to improve their operations, according to a country-by-country survey. The United States, which was in the top three last year, slipped four places.

The study by U.S. consulting firm Booz Allen Hamilton, uses its own "Sophistication Index" to determine how eagerly, and capably, countries have embraced information technology, including wireless access and Internet access.

Commissioned by Britain's Department of Trade and Industry, the survey by the New York-based consulting firm was based on telephone interviews from April-July of nearly 8,000 businesses in Britain, Australia, Canada, France, Germany, Italy, Japan, Ireland, South Korea, Sweden and the United States.

Sweden rose from fifth place to first from 2003 to 2004 because of the Scandinavian country's use of technology by businesses, large and small. Ireland was ranked second because of the knowledge workers there have in using information technology, while Britain finished third, four spots higher than in 2003.

British businesses were quick to adopt new technologies early, including voice over IP, or VoIP calling, which replaces a telephone line by making calls through the Internet, as well as desktop video conferencing, the report found.

Germany was ranked fourth, followed by South Korea, Canada, the United States and Australia. Italy, Japan and France rounded out the survey, which covered companies in sectors including manufacturing, construction, retail and wholesale, transport, communications, finance and services, and government agencies.

On a global basis, the survey — released last week — found that more and more businesses are measuring the benefits of technology instead of its costs on the bottom line. It also found that instead of touting their ability to provide access to the Internet, companies are using the speed and reliability as benchmarks of success.

"Overall, businesses are taking a more thoughtful and selective approach to deploying technology," said Frederick Knops, vice president of Booz Allen Hamilton. "We see a tighter focus on value-added applications, and greater emphasis on measurement to assess the benefits of new technology."