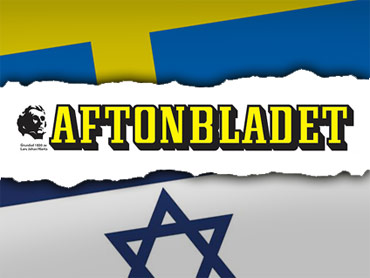 (CBS/Aftonbladet)
Benjamin Birnbaum is a reporter-researcher for The New Republic.
When Zvi Mazel was summoned to the Swedish Foreign Ministry back in January 2004, he knew he was in trouble. As Israel's top diplomat in Stockholm, the 64-year-old had just done something markedly undiplomatic--not exactly rare for Israeli envoys.

No, he hadn't remarked upon the "yellow skin and slanted eyes" of Asians. No, he hadn't taken part in a child-pornography ring. And no, he hadn't been found wallowing in his backyard--drunk, naked, and strapped in sexual bondage gear.

Mazel's offense was of a different order, the sort that would turn him into a national hero, not a national embarrassment. Attending a Stockholm art exhibit, he'd come across an unusual piece: "SNOW WHITE AND THE MADNESS OF TRUTH." The Snow White in question was a 29-year-old Palestinian woman who'd recently blown up herself and 21 Israelis at a restaurant, and her smiling photo draped a mini sailboat drifting about a rectangular basin of blood with Bach's Mein Herze schwimmt im Blut ("My Heart Swims in Blood") playing in the background. An enraged Mazel unplugged the display's power chords, toppled one of its spotlights, and was promptly escorted out of the museum.

In the ensuing fracas, Mazel enjoyed the full-throttled backing of Israeli officials, who defended his act as a suitable response to the glorification of a mass murderer. But the Swedish government treated Mazel's behavior differently, as an inexcusable assault on the nation's sacrosanct value of free expression.

Fast forward five-and-a-half years, and the two countries find themselves in a similar kerfuffle. The month-old spat began with the now-infamous "organ-harvesting" article in Aftonbladet, Sweden's largest newspaper, which accused Israeli soldiers of extracting kidneys from dead Palestinian combatants (and somehow transporting them to rabbis in New Jersey). To Jewish ears, the charge sounded suspiciously familiar, like a 21st century version of the blood libel that sparked pogroms in Europe from 1144 to 1946 (and that has lately gotten a new lease on life in the Muslim world).

The Israeli government, not to mention Jewish organizations worldwide, immediately called on the Swedish government to condemn the "organ libel." But after Sweden's ambassador to Israel initially distanced her countrymen from the article, the Swedish foreign ministry proceeded to distance itself from her.Prime Minister Fredrik Reinfeldt, Foreign Minister Carl Bildt, and other government officials have all since repeated the mantra that Swedish laws and norms prevent them from interfering in--or even opining on--a media matter. And polls show that an overwhelming majority of Swedes stand behind them. A headline in the Swedish English-language daily The Local managed to capture the popular perception of this imbroglio in just seven words:"Sweden's free speech tradition draws Israeli ire."

This is the self-portrait Sweden has painted, one of a free-expression paradise where citizens can say or publish whatever they please without consequence.

It's a lovely image. It's also a lie.

Now, Reinfeldt and Bildt aren't lying, per se, when they tell you that freedom of the press is enshrined in the Swedish Constitution. It is. But so are explicit restrictions on that freedom.Chapter 7 of the relevant section catalogues 21 types of "offences against the freedom of the press." Some, like #4 ("unauthorized trafficking in secret information") and #17 ("threats made against a public servant"), are standard even in the most libertarian democracies. Others are more draconian, like #15: "insulting language or behavior, whereby a person insults another by means of offensive invective or allegations or other insulting behavior towards him."

There's also #11, a form of which can be found in almost every Western democracy but America: "agitation against a population group, whereby a person threatens or expresses contempt for a population group or other such group with allusion to race, color, national or ethnic origin, religious faith or sexual orientation."

Swedish judicial authorities have repeatedly invoked this clause and similar regulations in the country's penal code to investigate, charge, and fine or imprison Swedes who vilify minorities.

The most famous such case involved Lutheran pastor Åke Green, who in June 2004 was sentenced by a district court to a month in prison for a sermon that called homosexuality "a deep cancerous tumor in the body of society."

After 17 months of appeals, during which the Green case became an evangelical cause célèbre, the Supreme Court reluctantly acquitted the clergyman--not on Swedish legal grounds, the Court noted, but in deference to the religious-freedom provisions of the European Convention on Human Rights.
Others haven't been so fortunate. 30-year-old white supremacist Björn Björkqvist, for example, has already served multiple jail terms for his incendiary writings against essentially every non-Aryan minority in Sweden.

Even Aftonbladet has run afoul of Swedish hate-speech laws, albeit not for anything the newspaper itself has published. At least twice in recent years, the tabloid's editor has been found liable for failing to censor the ravings of a commenter on one of its website's chat forums.
As for Swedish legal action against anti-Semitism, context is key. In January 2002, for instance, a district court sentenced neo-Nazi Fredrik Sandberg to six months in prison for publishing a Third-Reich-era pamphlet ("The Jewish Question"). But four years later, the official who initiated that case (Swedish Chancellor of Justice Göran Lambertz) discontinued an investigation into the Stockholm Central Mosque regarding its distribution of tapes that encouraged Muslims to kill Jews, described therein as "the brothers of apes and pigs." His legal justification? "[Such statements] should be judged differently--and therefore be regarded as permissible--because they were used by one side in an ongoing and far-reaching conflict where calls to arms and insults are part of the everyday climate in the rhetoric that surrounds this conflict."

Green Party elder statesman Per Gahrton, for example, was among the first Swedish politicians to publicly castigate Ambassador Elisabet Borsiin Bonnier for her Aftonbladet condemnation, demanding that she be recalled from Tel Aviv and "taught the basics of Swedish freedom of speech." Yet just five months ago, strangely enough, Gahrton scolded new NATO Secretary-General Anders Fogh Rasmussen--the Danish prime minister during the country's blasphemous-cartoon bout with the Muslim world--for "failing to condemn the Jyllands-Posten Mohammed caricatures." Confronted with the contradiction, Gahrton backtracked ("condemn" was a poor word choice, he admitted).

Aftonbladet hasn't even acknowledged its record of hypocrisy. As most European publications stood in solidarity with Jyllands-Posten and other Danish newspapers during the 2006 controversy, the Swedish tabloid branded Denmark "the most prejudiced, bigoted and narrow-minded country in Western Europe." But now that its own work is under attack, Aftonbladet has embraced the free-speech defense (and unlike Jyllands-Posten, which apologized for its slight, has expressed no regrets).

And then there's Prime Minister Reinfeldt, who faced his own cartoon crisis less than a year after taking office. In August 2007, the regional newspaper Nerikes Allehanda published an editorial on freedom of expression and, to illustrate the point, included a caricature of the Prophet Mohammed with the body of a dog--a drawing initially slated for a Stockholm art exhibit before it was jettisoned at the eleventh hour by the hosting museum (and subsequently rejected by others) for fear of violent reprisals.

As the cartoonist submitted himself to 24/7 police protection after receiving death threats, including a $100,000 bounty on his head from Al Qaeda in Iraq, Prime Minister Reinfeldt moved swiftly to prevent a Swedish sequel to the Danish affair, which claimed over 200 lives. While he resisted Muslim pressure to prosecute the offender--blasphemy, unlike group defamation, is legal in Sweden--he invited Muslim ambassadors and local community leaders to a summit. Algerian envoy Merzak Bedjaoui hailed Reinfeldt's proposed get-together as "an excellent initiative taken in a spirit of appeasement." And that spirit pierced the air as the prime minister addressed the gathering: "I regret if people have taken offense or feel offended," he said. "I personally would never intentionally act in a way that could be perceived by other religions as provocative or offensive."

This time around, Reinfeldt has professed no regrets, nor has he expressed any desire to defuse the situation by meeting his Israeli counterpart. (Foreign Minister Bildt already cancelled a scheduled visit to Jerusalem.)
How, then, does Sweden handle hate speech? When does it prosecute the offenders, when does it merely apologize for them, and when does it rally to their cause while pretending that that's what the country always does? In short, whenever Sweden pleases and for whatever reasons suit the moment.

By Benjamin Birnbaum:
Reprinted with permission from The New Republic.