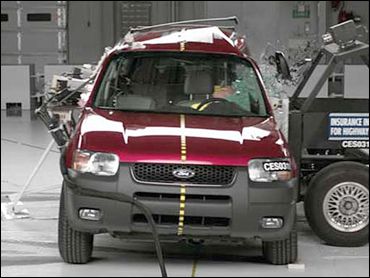 Two small sport utility vehicles with side air bags got high ratings from the Insurance Institute for Highway Safety in its first-ever side-impact crash tests.

But for the most part, vehicles performed poorly in the tests, which were among the first to measure what happens when dummies the size of small women are hit in side-impact crashes.

In test results released Tuesday, 2003 models of the Subaru Forester and the Ford Escape performed best among the 12 small SUVs tested.

Both vehicles received a "good" rating. The only other vehicle tested with side air bags, the Hyundai Santa Fe, received the second best "acceptable" rating, while the others earned `marginal" or "poor" scores.

The results were based on vehicle performance as well as how much injury was caused to identical dummies in the driver's seat and left rear seat as a result of the 31 mph crash.

The Subaru Forester offers standard side air bags with torso and head protection, while similar air bags are optional in the Ford Escape. The Insurance Institute found that when the Escape was tested without air bags, it performed considerably worse.

The Mitsubishi Outlander performed the worst in the Insurance Industry's test. In an Outlander with no side air bag, the crash barrier crushed the side of the vehicle and struck the dummy in the head, causing serious injuries to the head, torso and pelvis.

"In fact, the 2003 Mitsubishi Outlander has demonstrated very good real world safety performance," the company said in a statement.

The Honda CR-V and the Jeep Wrangler got ratings of "marginal," while the lowest rating of "poor" went to the Honda Element, the Saturn Vue, the Land Rover Freelander, the Suzuki Grand Vitara, the Toyota RAV4, the Escape without air bags, and the Outlander.

Ford was the only company that requested two tests, the Insurance Institute said. The Freelander, RAV4, Grand Vitara and the Wrangler don't offer side air bags as an option.

The Insurance Institute said side-impact tests are critical, since many vehicles that perform well in frontal crashes are still vulnerable in side crashes. The boom in large SUVs and pickups also has contributed to an increasing proportion of deaths in side-impact crashes, since vehicles are often mismatched by height and weight, safety experts say.

In a report released last week, the National Highway Traffic Safety Administration said it is considering adopting minimum head and chest protection requirements. The Insurance Institute also is working with automakers to develop voluntary safety standards to minimize damage in side-impact crashes. Those standards are expected to come out in late fall.

In the meantime, Brian O'Neill, president of the Insurance Institute for Highway Safety, said he hopes the crash test results will spur improvements more quickly.

"This is what happened with our frontal crash test results, and now we expect consumers will use the new test results to help them choose vehicles," he said.

The Senate confirmed Avril Haines to be director of national intelligence on Wednesday evening.

The Senate confirmed Avril Haines to be director of national intelligence on Wednesday evening.