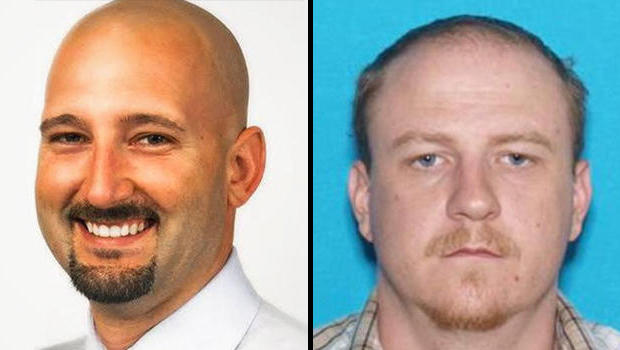 KANSAS CITY, Mo. — A man who is charged with gunning down a western Missouri police officer has so far eluded a swarm of law enforcement officers, who are scouring fields, woods, abandoned buildings and even empty school buses.

About 100 local, county and state law enforcement officers have been looking for Ian McCarthy since late Sunday, when he is believed to have shot Clinton police officer Gary Michael, who had stopped McCarthy's car, apparently for a registration violation. Investigators believe McCarthy, 39, jumped from his vehicle and shot the 37-year-old Michael, before driving a short distance, crashing his vehicle and fleeing on foot.

"And when you are dealing with someone who is armed and dangerous, it makes it more complex," Lowe said. "We have to make sure our officers are safe, while also making sure no one else is hurt."

About 30 law enforcement agencies from surrounding counties are augmenting officers from Clinton, Henry County and the state patrol. Federal agencies have made informal offers to help but have not officially joined the search, Lowe said.

Lowe said investigators are hunting for evidence that McCarthy has fled Henry County but are "fairly certain" he's still in the area. The search all the more difficult because few people in the Clinton area know McCarthy and he has no immediate family there, Lowe said. The Clinton police department had little previous involvement with McCarthy and there is no evidence that he knew Michael.

"That compounds the problem, when someone is able to not have any ties to a certain area, that makes the investigation more difficult," Lowe said.

McCarthy is also wanted in New Hampshire, where a warrant was issued in 2013 when he failed to show up for sentencing on a disorderly conduct charge, according to court records in that state. He served about four years in prison there for first-degree assault and a parole violation. He also is wanted on a warrant out of Johnson County, Missouri, in 2015 for unlawful possession of a firearm.

It's possible that those warrants prompted McCarthy to shoot Michael to avoid arrest, Lowe said. He also could have been under the influence of drugs or alcohol, or not in his right mind for some reason, but "it's hard to say unless we have him here to ask," Lowe said.

Michael, who had been on the force less than a year, was the first police officer killed in the line of duty in Clinton, a town of about 9,000 people about 75 miles (120 kilometers) southeast of Kansas City. He was a military police officer overseas for about five years before returning to the Kansas City area. He decided in his 30s to become a police officer and served in Appleton City for a short time before joining the force in Clinton.

Michael's brother said in an interview with "CBS This Morning" that he will be remembered for strengthening the community he helped serve.

"Even though there's a lot of tears today there was some laughter because we got to remember him and who he was and who he is, because he's still that person, and he proved it."