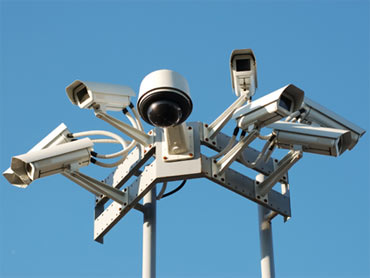 Most law enforcement experts will tell you nothing beats having cops on the beat when it comes to fighting crime. Police officers can't be everywhere. Now, they don't have to be - thanks to some high-tech help.

Every minute a car is stolen. Every day across the country 44 people are murdered and nearly 3,800 are victims of violent crimes. While crime usually rises during a recession, that's not the case now. Nationwide, violent crimes are down 5.5 percent. Crimes like murder declined 7.2 percent, robbery 8.1 percent, motor vehicle theft down 17.2 percent.

Law enforcement officials say the increased use of high-tech tools to fight crime is a big reason why.

From the operations center of the Office of Emergency Communications in Chicago "48 Hours" correspondent Erin Moriarty reports officials keep watch over the 232 square mile urban area with a massive network of cameras, creating a virtual eye in the sky. Officials refuse to give actual figures, but some estimate the number of publicly and privately owned cameras targeting Chicago to be around 15,000.

Nick Benton, a Chicago paramedic assigned to the operation center, said they can "Zoom in up to 32 times optically, and up to 184 times digitally."

"We can get license plates. I'm not going to pull up a specific license plate," he added. "But yes, you can actually zoom in and very clearly see their license plate."

City officials were keeping a close eye on crowds gathering for a Tea Party protest.

Can you pick out faces of those at the demonstration?

"We are very strict on how we use the cameras," Benton said. "We never zoom in on windows when they are open. We will never look into buildings and we are actually very careful if we zoom in on people's faces specifically."

Jim Harper of the Cato Institutesays the problem with surveillance cameras and technology is they have a spotty record of preventing crime. Instead, he says they are an invasion of privacy.

People in most cities are probably captured on cameras daily, if not multiple times a day," Harper said. "As these cameras network together, and they as they are better capable at recognizing individual faces, people will realize just how they are being watched."

Harper says the danger is when videos are released of individuals who are not actually involved in a crime. Remember the nationally broadcast video of a man changing his shirt - because officials first believed he could be the Times Square bomber.

"There are no absolutes here," Harper said. "The cameras are helpful in some instances - harmful in other instances if they've led us all astray."

But there is likely to be a demand for even more surveillance cameras. Officials say the solution then is ever more sophisticated equipment that catches criminals in the act.

911 operators in Chicago can turn on any surveillance camera within 150 feet of an emergency call. So when an operator received a call that a Salvation Army bell ringer was helping himself to the collection bucket - the cops were called in.

The brain of the video surveillance system is computer software called "analytics." It allows operators to set up a virtual perimeter around buildings. Once someone or something crosses a virtual line the computer sends an alert to an official on-duty.

Moriarty asked, "Are you concerned that officers will rely too much on technology and not do the regular foot work?"

"No," Lewin replied. "As with any technology, none of these things are the magic bullet - pardon the pun. They are just going to be another tool in the toolbox to help officers do their jobs."

The Fourth Amendment protects against unreasonable searches. Americans will soon have to decide when this goes too far.