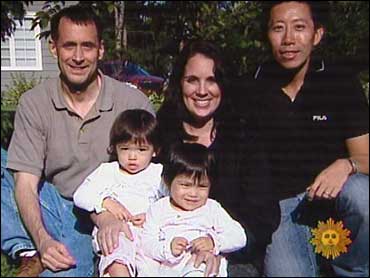 "Special delivery" is an old post office term that, you might say, has taken on new meaning in the world of medicine. And many a hopeful couple is taking full advantage. Our cover story is reported by Kelly Wallace:

It's their big night. The race is on … Melissa and Michael Musman from Brooklyn, New York have rushed to OSF St. Francis Medical Center in Peoria, Ill., to have their first child.

They've barely made it … but Melissa's not the one giving birth. Tracy - a surrogate mother - is.

New science and new laws are making for a new day for birth mothers like Tracy (she asked us not to use her last name) and parents like Melissa and Michael, whom we first met three weeks earlier.

"Just thinking about it now, I can get tears in my eyes," Michael said. "It's going to be a very emotional moment for me. Both of us."

A month after their wedding in 2006, Melissa had non-cancerous tumors removed from her pelvis and abdomen. Radiation made her infertile.

"How difficult was it when you learned you wouldn't be able to have a baby yourself?" Wallace asked.

"In the beginning, it was difficult, because every little girl dreams of getting married and having a baby," Melissa said.

"Ah, it was tough," Michale said. "You know, you get married, you want to have children. There were a lot of tears at nighttime, a lot of crying."

But before the surgery, Melissa saved one of her eggs. So, with Michael's sperm, the Musmans could create an embryo using in vitro fertilization (or IVF) … a test tube baby.

But they still needed a willing woman and her healthy womb to do the rest.

"It is like a dating service, and both people can say no," said New Jersey lawyer Melissa Brisman, who found the surrogate mother for the Musmans. She's a leading "matchmaker" connecting surrogates with people who can't have children themselves.

"These are the intended parent coordinators," Brisman said.

"What does that mean, 'intended parent coordinator'?" asled Wallace.

"They call the clients and they go over what the clients are looking for in their carrier," Brisman said. "We're really trying to hit people who are 26 to 42, who have given birth before, who like being pregnant, who want to help a couple - and certainly, you know, don't mind making some extra money doing it."

Surrogacy today is a far cry from the late '80s, when Americans were gripped by the Baby M case.

(CBS)
Mary Beth Whitehead (left) agreed to carry a baby for a New Jersey couple, using the father's sperm and her egg, which meant Whitehead was the baby's biological mother.

After giving birth in 1986, she wanted to keep the baby. The highly-publicized court battle ended with Whitehead losing custody, but she was given visitation rights.

Today, attorneys like Melissa Brisman (herself the mother of three children born through surrogacy) create contracts that are airtight, assuring that the baby's "carrier" is simply that - a body with a uterus, with no genetic ties to the baby.

"We never had a carrier that we found and screened that actually wanted to keep the baby," Brisman said.

Surrogates today are more like Gina Scanlon and Jennifer (again, first name only), both from the Pittsburgh area.

Scanlon, 42 years old, is a portrait painter and mother of three. She delivered twins as a surrogate two years ago. And now, in part because her husband Brian needs expensive surgery, Scanlon is pregnant again.

In contrast, this is Jennifer's first try as a surrogate. She's a 36-year-old stay-at-home mother of two.

"Being a mother, I can't imagine life without my children," she told Wallace, "and so you know, it really came to the fact that I would really like to help another couple have a child that they otherwise could not."

"What do you think is inside of you that said, 'I want to be a surrogate'?" asked Wallace.

"I love being pregnant," Gina told her. "It's a great experience. And having met friends and family who experienced infertility, their choices are limited. I felt that I wanted to do this for someone else. My family was complete."

"Did you ever worry, first time, that you would not want to give up those babies?"

"It was never something that entered my mind," Gina said.

"No. You go into it with the thought that this is for someone else. It is not your baby to give up. It's their baby from the start. And the end is the reward: The end is being able to deliver this baby and turn it over to the parents. And see, they've been waiting for years for this to happen. And it finally happens when they're holding their own child. And it's so worth it."

Gina delivered twins for their parents - Tom Pistula and Jeffrey Lui. Tom is a college professor; Jeffrey an accountant. Iris and Ivory were conceived with an egg provided by an egg bank and sperm supplied by Jeffrey.

What were they looking for in a surrogate?

"A woman who I thought was emotionally secure enough to give up the children and … to be able to handle that process," Tom said.

They say they want the twins to call Gina "Auntie."

"What do you they mean to you, Iris and Ivory?" Wallace asked Jeffrey.

"They are my world," he said. "I just can't imagine without them how life would be."

Paying a surrogate remains illegal in several parts in the United States.

It's also against the law in most of Europe, which is why Sylvia and Michaela came all the way from Italy to the La Jolla IVF Clinic in California.

Sylvia lost her uterus - and almost her life - after a miscarriage. The couple watched as embryos created through his sperm and her eggs were placed inside the body of a 30-year-old surrogate - a woman they'd earlier communicated with from afar but never before met.

"It is inconceivable to have done this 30 years ago," Michaela said.

A few weeks later, they will learn the procedure was a success - and it's twins

And in this tough economy, applications from potential surrogates are escalating. Still, Brisman says, of the 100 to 200 queries/applications received every week, she only accepts about five to ten.

"When people see an ad, 'Become a surrogate mother,' they think they're just gonna show up, get pregnant and get all this money," Brisman said. "And once they actually fill out the application, and get interviewed, they actually understand what it means."

What is Jennifer's reaction to the criticism from some who call surrogates a "womb for rent"?

"It's, it's kind of offensive," Jennifer said. "It's insulting. It's very insulting."

"Does it make you angry when you hear something like that?" Wallace asked.

"A little bit, yeah," she said. "It's a service that you're providing, if you want to think of it that way. More than, it's an exploitation of your body. You're not selling your body."

All the same, surrogacy remains an act raising questions about our whole notion of motherhood, that unmistakable bond between mother and child.

"The definition of motherhood is changing over time," Brisman said. "Like, it's not necessarily the woman who gives birth is the mother. It's very hard for people to accept. I think in a few years or, you know, maybe ten years, this is just going to be old news."

Back in Peoria, Melissa and Michael Musman's world is about to change forever.

"I am overwhelmed with joy," Michael said. "I want to thank Tracy for everything she did for us."

And Tracy - who's now very much in the background - just doesn't want to cry.

"I'm ecstatic for them," she said. "This is a great gift. I got to be part of that, making me really happy and joyful to know I could make someone else's life so happy."

The happiest gift of all - the gift life, or as Melissa describes him, "our miracle child."