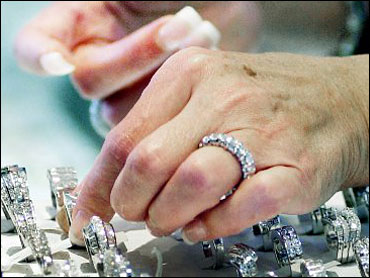 It was something Perlette Kadoch had come to accept as part of life: Her sweaty hands had always been the source of some embarrassing moments.

At work, as customers came in for a closer look at a piece of jewelry, her sweat would drip onto them. She couldn't write a receipt without causing a mess. Even at home, applying makeup was a challenge.

For most of her 54 years, she resigned herself to going through life with wet hands and a paper towel to sop up the sweat.

Until this past summer.

Delicate nerve surgery helped Kadoch dry up a problem that troubles about 2.8 million people in the United States, or about 1 in 100. They suffer in silence from a condition known as hyperhidrosis — excessive sweating usually in the hands and feet.

Embarrassment and anxiety are the natural result of the disorder. Sufferers avoid social situations, even certain careers, because of it.

In the last three years, new technology has made the surgery less invasive and more widely available. Only three tiny incisions are required below the breast. Doctors use a scope to find that section of the nerve and then remove it. The operation, which lasts about 30 minutes, requires general anesthesia.

Before 2000, surgeons had to make a major incision in the chest to get to the nerve.

The surgery "instantaneously changes their lives," said Dr. Michael Mack, director of cardiovascular services at Medical City Dallas Hospital and founder of the Hyperhidrosis Center. Mack, who did Kadoch's surgery, has performed about 160 of the surgeries this year alone.

The roughly $6,500 outpatient procedure is covered by most major insurance companies.

Over and over again, Mack has heard patients proclaim, "I thought I would have to deal with this for the rest of my life. I can't believe it's gone."

Kadoch, who lives in Fort Lee, N.J., still found herself occasionally clutching a paper towel several weeks after the surgery, but not because she needed to; she simply hadn't broken the habit.

Today, her embarrassment is gone, along with the paper towel.

"I realize that I don't need it any more," Kadoch said. "The first couple of months, I was doing it without realizing it. Now I don't do it anymore."

She has no problem applying makeup or doing anything else.

"I can help customers more confidently," she said. "I can help them try on jewelry instead of being embarrassed and having a napkin in your hands.

"It's been wonderful. I feel like a free person."

Studies show genetics play a role in a large percentage of people with hyperhidrosis. Some ethnic groups, including people of Asian and Middle Eastern descent, are also more prone to the disorder.

Kadoch was born in Casablanca, Morocco, and has two cousins who also suffer from hyperhidrosis.

Before learning about the surgery from a television program, she had tried in vain to find a cure, asking doctor after doctor for help.

Options besides surgery include topical antiperspirants and Botox injections on the hands, which stop the sweating for only 3-4 months. There are medications, but the side effects are undesirable: One medication results in dry mouth and eyes; another, a lack of energy and sleepiness.

There is also iontophoresis, a treatment in which patients place their hands in a salt-water solution through which a low-voltage electrical current flows.

Dr. Samuel Ahn, a vascular surgeon at the University of California at Los Angeles Medical Center, said that if none of those measures work — or if they are too bothersome and patients want something more permanent — then surgery makes sense.

But many doctors don't know about the surgery. Kadoch's primary care doctor, for instance, told her nothing could be done to stop the sweating.

That's something that a group of doctors who, in May, founded the nonprofit International Hyperhidrosis Society want to combat by providing information about hyperhidrosis and its treatment to doctors and the public.

Kadoch encourages others who suffer from the condition to consider the surgery that she proclaims has improved her quality of life.

"I would say go for it in a heartbeat," she said. "Don't even think about it."