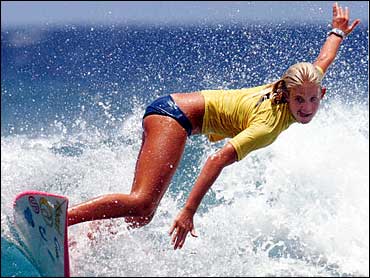 The water was clear and there was no indication of danger when a 13-year-old surfing star went out on the waves with her best friend and her friend's father.

But while Bethany Hamilton was lying on her board off Kauai's North Shore, a shark bit once and then disappeared, taking off her left arm just below the shoulder.

"Nobody saw it happen. She just yelled, 'A shark bit me!"' said her father, Tom Hamilton.

Bethany Hamilton, who remained in stable condition after the attack Friday morning, talked of the attack Saturday.

"My arm was hanging in the water, and it just came and bit me," Hamilton told Honolulu television station KGMB.

She said the shark pulled her back and forth, "but I just held on my board, and then it let go."

"It was a very clean amputation," Dr. David Rovinsky said.

Hamilton's background in competitive surfing helped her survive, he said.

"This is a woman who is a highly trained athlete, and because of that she's able to handle a huge blood loss really well," Rovinsky said.

She was preparing for a second surgery Monday, her father said.

Bethany, of Princeville, was attacked in an area known as Tunnels, a quarter-mile off Makua Beach near Haena.

After the attack, lifeguards went out on personal watercraft to warn people about the shark, said Cyndi Ozaki, spokeswoman for Kauai County. County officials also closed the area between Ke'e and Wainiha beaches.

"The water was crystal clear according to people in the area, and there was no indication that there was a shark nearby," she said.

Neither the injury nor the beach closure deterred dozens of people from surfing Saturday in the waters where the attack took place.

"To not surf would be like taking away your breath," said Jill Schwed, 36, a Kilauea masseuse.

The beaches were officially reopened Saturday afternoon, after officials flew over the area and saw no evidence of other sharks.

The shark took a chunk out of Bethany's surfboard that measured about 16 inches across and 8 inches deep, penetrating nearly to the center of the board, which suggests the shark was 12 to 15 feet long, Kauai fire Battalion Chief Bob Kaden said. It may have been a tiger shark, said Randy Honebrink, spokesman for the state Shark Task Force.

Bethany is a competitive surfer who already had secured sponsorships and was expected to go pro, according to the Hanalei Surf Online Web site.

"She is probably the best young surfer I have ever seen," said Bobo Bollin, who works at the Hanalei Surf Company, which sponsors a surf team that includes Bethany. "She was going to be the women's world champion and I think she still will be."

Many said they expected Bethany to ride the waves again, but her father wasn't so sure.

"She's back and forth," Tom Hamilton said.