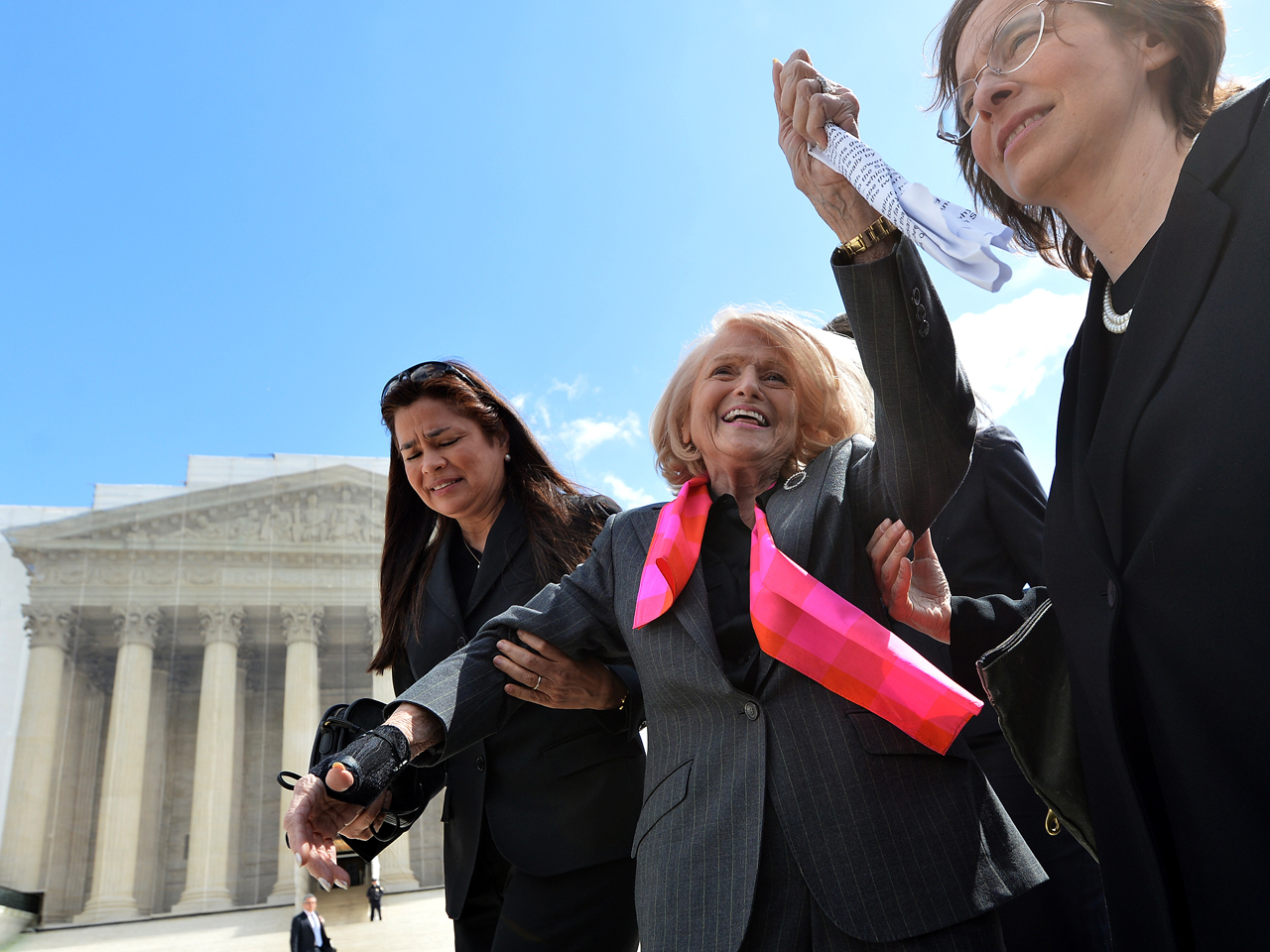 Edie Windsor, the 83-year-old lesbian who sued the United States government for discriminatory treatment under the Defense of Marriage Act (DOMA), expressed optimism today that the Supreme Court will strike down the 17-year old law.

"I think it went beautifully," Windsor said from outside of the court after today's oral arguments in United States v. Windsor. "I thought the justices were gentle... they were direct, they asked all the right questions, but I didn't feel any hostility or any sense of inferiority. I felt we were very respected, and I think it's going to be good."

Windsor sued the government because under DOMA, it did not recognize her marriage to her late partner, Thea Spyer. "I am today an out lesbian who just sued the United States of America, which is kind of overwhelming for me," Windsor said today, adding that she felt thrilled and humbled by the experience.

DOMA, passed by Congress and signed by President Clinton in 1996, prohibits federal recognition of same-sex marriages. Both the First and Second Circuit Court of appeals have struck down a provision of the law (called Section 3) that denies federal benefits, like Social Security benefits or the ability to file joint tax returns, to same-sex couples legally married. Because of these lower court rulings, DOMA has been declared unconstitutional in some regions of the country but not others.

After living together in New York for more than four decades, Windsor and Spyer finally married in 2007, when Spyer became seriously ill. When Spyer died in 2009, she left Windsor her estate. Because DOMA didn't recognize their marriage -- even though the state of New York did -- the IRS hit Windsor with $363,053 in estate taxes.

In today's oral arguments, a majority of justices sounded skeptical of the law, according to CBS News' Jan Crawford. The justices, however, gave different rationales for their conclusion -- Justice Anthony Kennedy, for instance, focused on the concept of federalism. He said that DOMA put the federal government "at real risk of running in conflict with what has always been thought to be the essence of the state police power, which is to regulate marriage, divorce, custody."

The liberals on the court, meanwhile, focused on the concept of equal protection under the law. Justice Ruth Bader Ginsburg said that with DOMA in place, states that recognize same-sex marriage "offer two kinds of marriage -- the full marriage, and then this sort of skim milk marriage."

Windsor's attorney Roberta Kaplan, who argued Windsor's case before the court today, echoed her client's simple assessment of how the arguments went: "I think it was good."

"We are very hopeful they will affirm the decision of the courts below," Kaplan said, declining to make any predictions as to how the court would rule.

James Essex, director of the LGBT project at the American Civil Liberties Union, noted that DOMA impacts around 1,100 federal laws, including veterans' benefits, family medical leave and tax laws. He noted that there are 130,000 married same-sex couples in the United States today.

The court today also considered whether it even had jurisdiction in Windsor's case. It may decide that it doesn't, since both sides in the case -- Windsor and the federal government -- agree the law is unconstitutional. Since the Obama administration has refused to defend the law (and, in fact, argued against it in court today), the Bipartisan Leadership Advisory Group (BLAG) is defending the law on on behalf of House Republicans.

Kaplan, Windsor's lawyer, said she was confident the Supreme Court would rule on the merits of the case, rather than dismissing it. "Even if they don't, I think everyone agrees that Edie gets her money back," she said.

The justices critically asked the U.S. government's attorneys why they were enforcing the law, even as they argue in court that it's unconstitutional. "I'm wondering if we're living in this new world where the attorney general can simply decide, yeah, it's unconstitutional, but it's not so unconstitutional that I'm not willing to enforce it," Justice Antonin Scalia said.

Yesterday, the Supreme Court heard arguments in a separate case pertaining to same-sex marriage, Hollingsworth v. Perry. That case gives the court the opportunity to recognize marriage as a constitutionally-protected right for all couples, gay or straight. However, in yesterday's arguments, the justices seemed hesitant to make any bold moves.