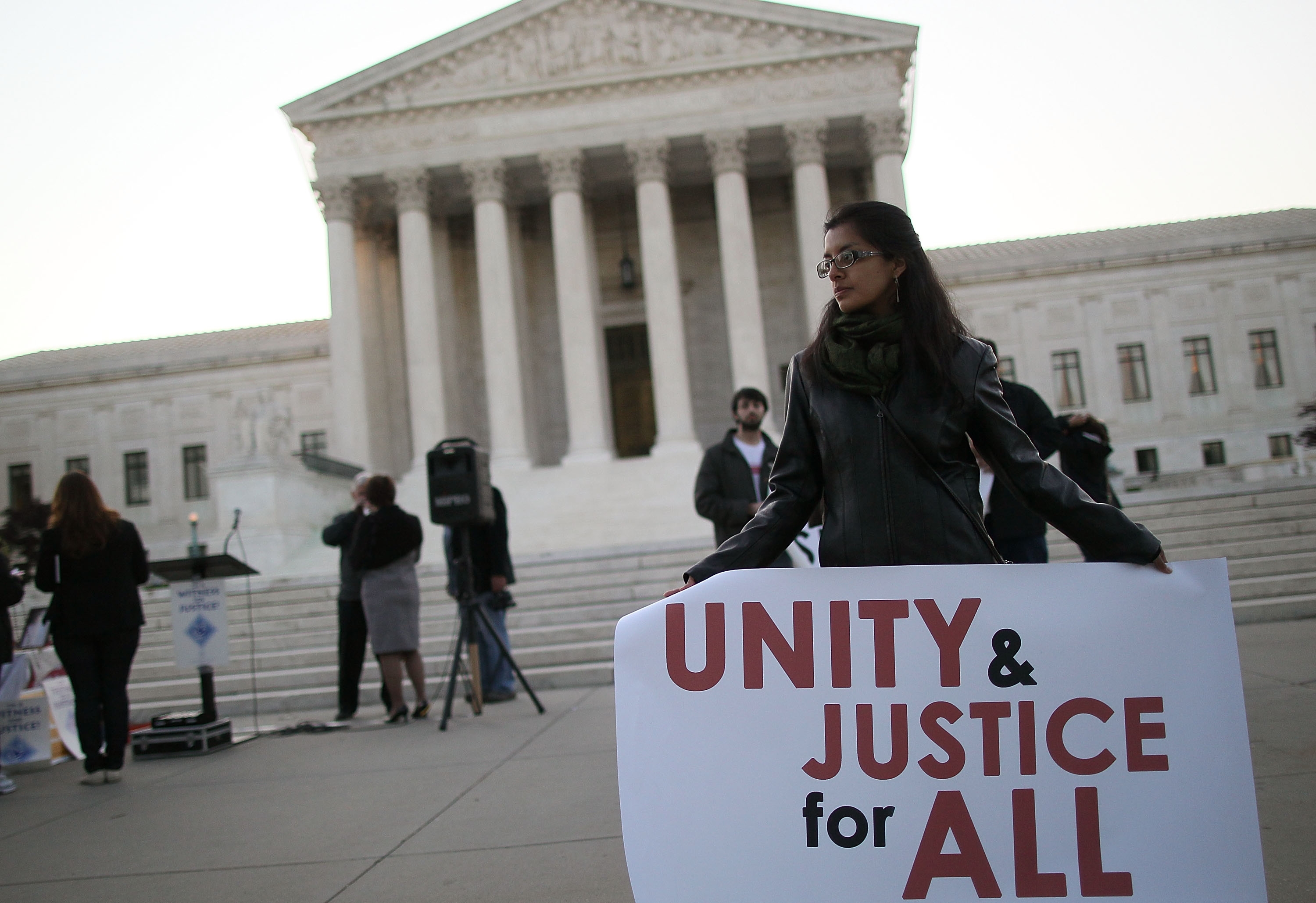 Today, the court hears arguments over the constitutionality of Arizona's controversial immigration law, known as S.B. 1070. Passed in 2010, the law makes it a crime to be in the state as an undocumented immigrant and compels local law officials to enforce the law. Because of the pending suits against the law, some of its central provisions haven't gone into effect.

The law inspired conservatives across the country to adopt more aggressive measures against undocumented immigrants. At the same time, it spurred huge rallies across the country in 2010, with its opponents charging the measure smacks of racism and is a disgrace to Arizona.

While the measure is unlikely to ignite the fierce debate it did in 2010, the Supreme Court case will once again put the spotlight on the Arizona law. The court will hand down its ruling on the law -- as well as its ruling on President Obama's health care overhaul -- sometime in June, right in the middle of the presidential campaign.

For Romney, the court hearing comes just as he is seeking to shift his tone on immigration from a hardline stance on the issue catered to the Republican base to a more moderate position. The issue of immigration -- and this law in particular -- have put the former governor in a delicate spot, where he could seize on the issue to spotlight the president's failures but runs the risk of turning off Latino voters, a voting bloc growing in size and and influence. Democrats are waiting for him to make the wrong move, giving them a better chance to turn the Arizona law into a galvanizing force for their party.

When it comes to the Supreme Court hearing today, the Romney campaign is avoiding the issue of whether Romney supports the tenets of the law, choosing to instead focus on the broader picture.

"The issue before the Supreme Court today is directly connected to Barack Obama's refusal to offer any plan to fix our broken immigration system," Romney spokesperson Andrea Saul said in a statement to Hotsheet. States like Arizona, she said, had "no choice but to make up for his failure. Instead of using federal resources to sue states that are seeking to assist in enforcement of our immigration laws, Mitt Romney would direct resources toward securing our borders, strengthening legal immigration to bring more job creators and innovators to our shores, and finally ending illegal immigration in a civil but resolute manner."

So Romney may think Arizona had no choice but to act -- but whether he thinks they acted in the right way is a matter of debate. Romney has received new scrutiny in recent weeks for comments he made in a February debate, in which he called Arizona's immigration policies a "model" for the nation. The Romney campaign insists Romney wasn't talking about S.B. 1070, but about an employer verification system in the state.

Still, that hasn't stopped Democrats from attacking Romney on the matter: "We now have a Republican nominee who said that the Arizona laws are a model for the country," Mr. Obama told Univision in an interview earlier this month. "And these are laws that potentially would allow someone to be stopped and picked up and asked where their citizenship papers are based on an assumption... [It's] very troublesome, and this is something that the Republican nominee has said should be a model for the country."

The political advantage for the president on this issue is clear -- it has the potential to mobilize Latino voters, a constituency that is very reliably Democratic but doesn't always turn out to the polls.

There's already evidence of this in Arizona: One Arizona, a nonpartisan coalition borne out of the fierce opposition to the law, helped register 90,000 new Latino voters in Arizona in 2010, Arizona Public Media reports. During 2011 municipal elections, One Arizona helped increase Hispanic turnout in one Phoenix district by 500 percent.

"These are folks who probably would not have voted had it not been for the coalesced efforts of One Arizona," the group's director, Leticia de la Vara, told Arizona Public Media.

Obama team steps up outreach to HispanicsCan Mitt Romney fix his Latino problem?Romney declines to take a stand on Rubio's DREAM ActGOP: Obama campaign seeing a "mirage" if they think Arizona is in play

The issue is potent enough that the Obama campaign thinks Arizona could be in play this year, even though it's a traditionally Republican state. A new statewide Merrill/Morrison Institute poll suggests the presidential race is currently a toss up there -- 42 percent of registered Arizona voters said they'd vote for Romney, while 40 percent said they're backing Mr. Obama. Another 18 percent were undecided.

At the same time, there's polling to suggest the opposition to S.B. 1070 isn't as overwhelming as Democrats may think. A Quinnipiac poll released Friday found that 62 percent of registered voters nationwide think the Supreme Court should uphold the Arizona law, while just 27 percent say it should strike it down. Even 45 percent of registered Hispanic voters said the court should uphold the law, with 43 percent saying it should strike it down.

Jennifer Korn, executive director of the Republican-leaning Hispanic Leadership Network, said the level of support behind the law isn't surprising, given the widespread frustration there is among all Americans over immigration.

She pointed out that Mr. Obama promised to support a comprehensive immigration bill in his first year in office, but failed to do so, even with a veto-proof majority in the Senate and control of the House.

"It leaves some of us scratching our heads," she said. "There's an opportunity there for Romney to step in and say what he's going to do."

The opportunity could come in the form of the DREAM Act, a measure that would give upstanding youths who were brought into the country illegally a way to earn legal status. The bill has floated in the halls of Congress for several years, and Democrats have pushed the bill in recent years to no avail. Now Republican Sen. Marco Rubio of Florida has said he'll put forward a scaled back, Republican version.

"For 12 years, there has been this version of the DREAM Act that hasn't been able to pass," Korn said. "If we truly care about the undocumented children who are stuck in limbo... I would urge Democrats to work with Sen. Rubio and Republicans, to have a solution we both can agree on."

Romney has hit the campaign trail with Rubio -- a potential vice presidential pick -- but he so far has declined to take a stand on Rubio's version of the DREAM Act. "It has many features to commend it, but it's something that we're studying," he said on the campaign trail Monday.