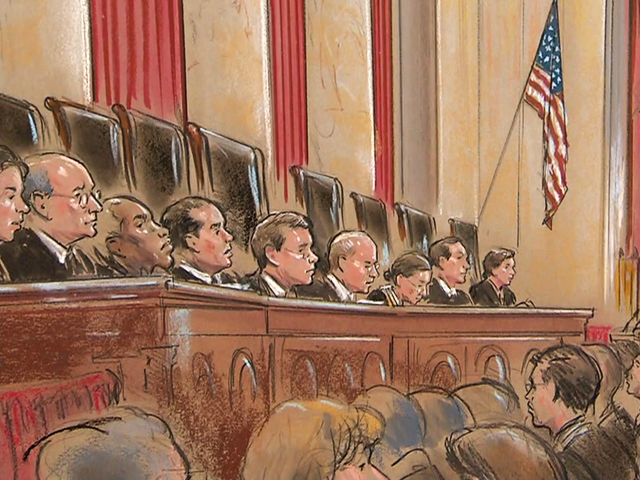 (CBS News) WASHINGTON -- Money and politics were issues for the Supreme Court Tuesday in a case that could have enormous consequences. Justices heard the latest challenge to campaign finance reforms enacted after the abuses of the Watergate era. The question before the court is whether limits on individual contributions to candidates and political parties violate the First Amendment.

In court, the battle lines were drawn.

Liberal justices defended rules that limit the overall amount of money people can give to different candidates and political parties.

Justice Ruth Bader Ginsburg suggested the limits promote "democratic participation," adding, "The little people will count some, and you won't have the super-affluent as the speakers that will control the elections."

But conservatives indicated overall limits on contributions to candidates instead infringe the right to free speech.

Justice Samuel Alito bluntly dismissed speculation the caps are needed to prevent corruption: "What I see are wild hypotheticals that are not obviously plausible."

The case was brought by Alabama businessman Shaun McCutcheon, who argues he should be able to support as many candidates as he wants in an election cycle. Under the law, he will hit the contribution cap after donating the maximum $2,600 to 18 candidates.

"I think this is a fundamental free speech issue about your right to spend your money on as many candidates as you choose," McCutcheon said. "It doesn't make any sense if my 18th race was an Alabama House race and I also wanted to donate to a Florida Senate race I couldn't do that."

But veteran campaign finance reform advocate Fred Wertheimer said there's more at stake. Without the caps, those individual contributions would add up to millions.

"This case is not just Mr. McCutcheon so he can give a few extra contributions. It's about whether he can give $2.5 million to support congressional candidates," Wertheimer said. "That's where the danger comes from."

The sharp division shows just how contentious the issue has become for the justices, but on one thing they did seem to agree: There was no interest in using this case to make a more sweeping ruling that would ban or limit all campaign contributions. A decision on the case is months away.

Flashback 1996: Man sues Pepsi for not giving him a Harrier Jet
Jan Crawford