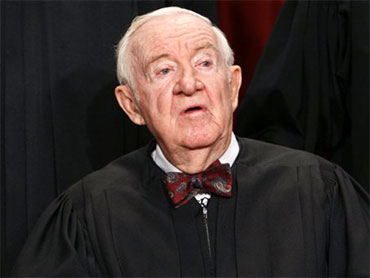 The retirement of John Paul Stevens, the Supreme Court's leading liberal but a justice who also could find conservative allies, will set off an election-year political battle over President Barack Obama's second high court pick.

Stevens said Friday he will step down when the court finishes its work for the summer in late June or early July. He said he hopes his successor will be confirmed "well in advance of the commencement of the court's next term." Obama hailed Stevens as an "impartial guardian of the law" and promised to move quickly to nominate a replacement.

"We cannot replace Justice Stevens' experience or wisdom," Obama said at the White House after returning from a nuclear treaty-signing trip to Prague. "I'll seek someone in the coming weeks with similar qualities: an independent mind, a record of excellence and integrity, a fierce dedication to the rule of law and a keen understanding of how the law affects the daily lives of the American people. It will also be someone who, like Justice Stevens, knows that in democracy powerful interests must not be allowed to drown out the voices of ordinary citizens."

Stevens is leaving ample time for the White House to settle on a successor and for Senate Democrats, who control a 59-vote majority, to hold confirmation hearings and a vote before the court's next term begins in October. Republicans have not ruled out attempts to delay confirmation.

Stevens' announcement, which came 11 days before his 90th birthday, had been hinted at for months. It's presumed Mr. Obama will nominate another liberal, so the departure won't alter the court's philosophical makeup.

A White House aide said Mr. Obama was considering 10 possible replacements, but wouldn't name any of them.

Others who might be considered include two Democratic governors, Jennifer Granholm of Michigan and Deval Patrick of Massachusetts, and State Department legal adviser Harold Koh.

Stevens was nominated by President Gerald Ford in 1975, and throughout his tenure he usually sided with the court's liberal bloc in the most contentious cases - those involving abortion, criminal law, civil rights and church-state relations. He led the dissenters as well in the case of Bush v. Gore that sealed President George W. Bush's election in 2000.

Stevens began signaling a possible retirement last summer when he hired just one of his usual complement of four law clerks for the next court term. He had acknowledged in several interviews that he was contemplating stepping down and would certainly do so during Mr. Obama's presidency.

Chief Justice John Roberts said in a written statement that Stevens "has enriched the lives of everyone at the Court through his intellect, independence, and warm grace."

Senate confirmations of Supreme Court justices have increasingly become political battles and this one will come amid the added heat of congressional election campaigns.

Sen. Patrick Leahy, D-Vt., chairman of the Senate Judiciary Committee, appealed for civility. "I hope that senators on both sides of the aisle will make this process a thoughtful and civil discourse," Leahy said.

Looking toward those hearings, Senate Republican Leader Mitch McConnell of Kentucky said, "Americans can expect Senate Republicans to make a sustained and vigorous case for judicial restraint and the fundamental importance of an evenhanded reading of the law."

In a telephone interview, Leahy said he had suggested to Mr. Obama that "the wisest move" would be to plan confirmation hearings on the same midsummer schedule used for the nominations of Roberts and Sotomayor. Democrats have an incentive to seat another justice before the November elections, in case Republican Senate victories make confirmation more difficult after that.

Leahy said Stevens gave him a heads-up on his retirement plans a few weeks ago. "I told him at the time I'd like to have him stay forever," Leahy said.

Stevens officially informed Mr. Obama in a one-paragraph letter addressed to "My dear Mr. President." It was delivered to the White House by court messenger at 10:30 a.m. EDT on a day when the court wasn't in session.

White House counsel Bob Bauer telephoned the news to Mr. Obama aboard Air Force One, as he returned from the trip to Prague.

Stevens' departure will not change the court's conservative-liberal split because Mr. Obama is certain to name a liberal-leaning replacement, as he did with his first nominee, Sotomayor. But the new justice is not likely to be able to match Stevens' ability to marshal narrow majorities in big cases.

Stevens was able to draw the support of the court's swing votes, now-retired Justice Sandra Day O'Connor and Justice Anthony Kennedy, to rein in or block some Bush administration policies, including the detention of suspected terrorists following the Sept. 11, 2001, attacks, its tilt toward protecting businesses from some lawsuits and its refusal to act against global warming.

But after the arrival of Roberts and Justice Samuel Alito, President George W. Bush's appointees, Stevens more often was among the four liberal justices in dissent.

Stevens' recent dissent in a major case involving campaign finance laws showed both the eloquence of his writing and, in his stumbling reading of his opinion in the courtroom, signs that his age might at long last be affecting him, though he remains an active tennis player and swimmer.

He is the court's last World War II veteran and that experience sometimes finds its way into his writings, recently in a reference to Tokyo Rose, the English-speaking Japanese radio announcer who addressed U.S. soldiers in the Pacific.

His friendly manner of questioning lawyers who appeared before the court could not hide Stevens' keen mind. His questions often zero in on the most telling weaknesses of a lawyer's argument and the case's practical effect on everyday people.

A pleasant, unassuming man, Stevens has been a prolific and lucid writer. For many years, he wrote more opinions each court term than any other justice.

Most justices let their law clerks write the first drafts of opinions, but Stevens has used his clerks as editors.

He'd write the first draft and submit it to the clerks for comment. "That's when the real fun begins," Stevens once told a visitor. "The give and take can get pretty fierce."

His opinions have reflected his personal writing style - a conversational one that contrasted sharply with the dry, dull efforts of some other justices.

A member of a prominent and wealthy Chicago family, Stevens spoke proudly of being a Cubs fan who was at Wrigley Field for the 1932 World Series game when Babe Ruth supposedly pointed to the spot where he would hit a home run. He met many celebrities of the day when they stayed at his family's hotel in Chicago, including aviation pioneer Amelia Earhart.

Stevens graduated from the University of Chicago. After serving in the Navy during World War II, he earned a law degree from Northwestern University, finishing first in his class. He later taught antitrust law at both schools.

In 1979, Stevens became only the second justice to divorce while serving on the court. Stevens and his first wife, Elizabeth Jane Sheeren, had four children. He later married a former Chicago neighbor, Maryan Mulholland Simon.

An avid bridge and tennis player, Stevens also is a licensed pilot. From autumn through spring, he and his wife routinely travel to his condominium in Fort Lauderdale, Fla.

"I lead an average life, just like anybody else," Stevens once told an acquaintance. "I play bridge, play tennis, try to play better golf. I'm very comfortable here."

Even in his late 80s, Stevens said he swam every day and continued playing tennis several times a week. He described reading legal briefs on the beach, noting his colleagues' jealousy when in court one day he opened a brief and grains of sand spilled out.