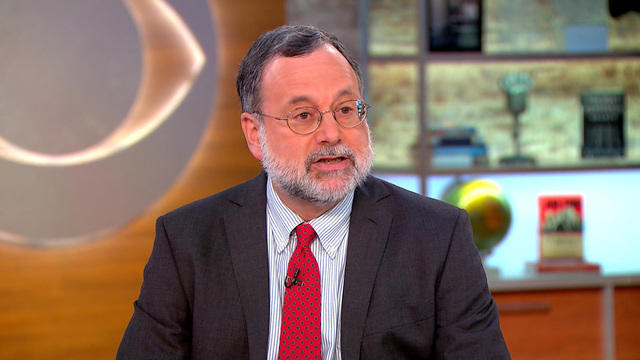 Confirmation hearings for Supreme Court nominee Brett Kavanaugh begin Tuesday. If the Senate approves his nomination, it will mark President Trump's second appointment to the high court and solidify its conservative majority.

In his new book, "The Most Dangerous Branch: Inside the Supreme Court's Assault on the Constitution," author David Kaplan argues that the judicial branch has too often intervened in the most controversial issues of our time, from the outcome of our presidential elections to social policies that define a generation.

"The court in too many different areas has intervened because it can, not because it should," Kaplan said. "Whether it was abortion in 1973 or Bush vs. Gore in 2000 or in gun control or campaign finance or voting rights in the last 10 years, by overruling what the political branches have done, they make the stakes higher."

The nomination process for Supreme Court justices has become increasingly contentious and politicized, a shift that Kaplan says has happened over the last 50 or 60 years in the wake of the decision in Brown vs. Board of Education. While Kavanaugh's possible appointment would certainly move the court toward the right, Kaplan doesn't see him becoming a "swing justice" as others have argued.

"[The swing justice] will be Chief Justice Roberts. It is truly going to become the Roberts court and he is the one to watch, I think, in coming years and his regard for the institution and on occasion his desire to pull the cord out of the maelstrom, I think, is the best hope for the court. I'm not especially hopeful but I think he's the best hope," Kaplan said.

Abortion-rights advocates have stepped up their efforts in recent months in anticipation of a reconfigured U.S. Supreme Court, but Kaplan argues that's not going to be the next big issue they tackle.

"I think the key area — and this is what's most important for movement conservatives — is going to be to deregulate what they call the 'federal administrative state.' The agencies, the federal government, operating under very broad statutes passed by Congress, have vast discretion and the court for 30 years has deferred to that. I think that's going to stop," Kaplan said. "Gorsuch already has said in writing that he disagrees. Kavanaugh is on record as disagreeing. It is called Chevron deference and I think taking apart the power of the SEC, the EPA, OSHA — I think that's the great grail for conservatives and I think they may be successful. That's more significant in the long run than even abortion."