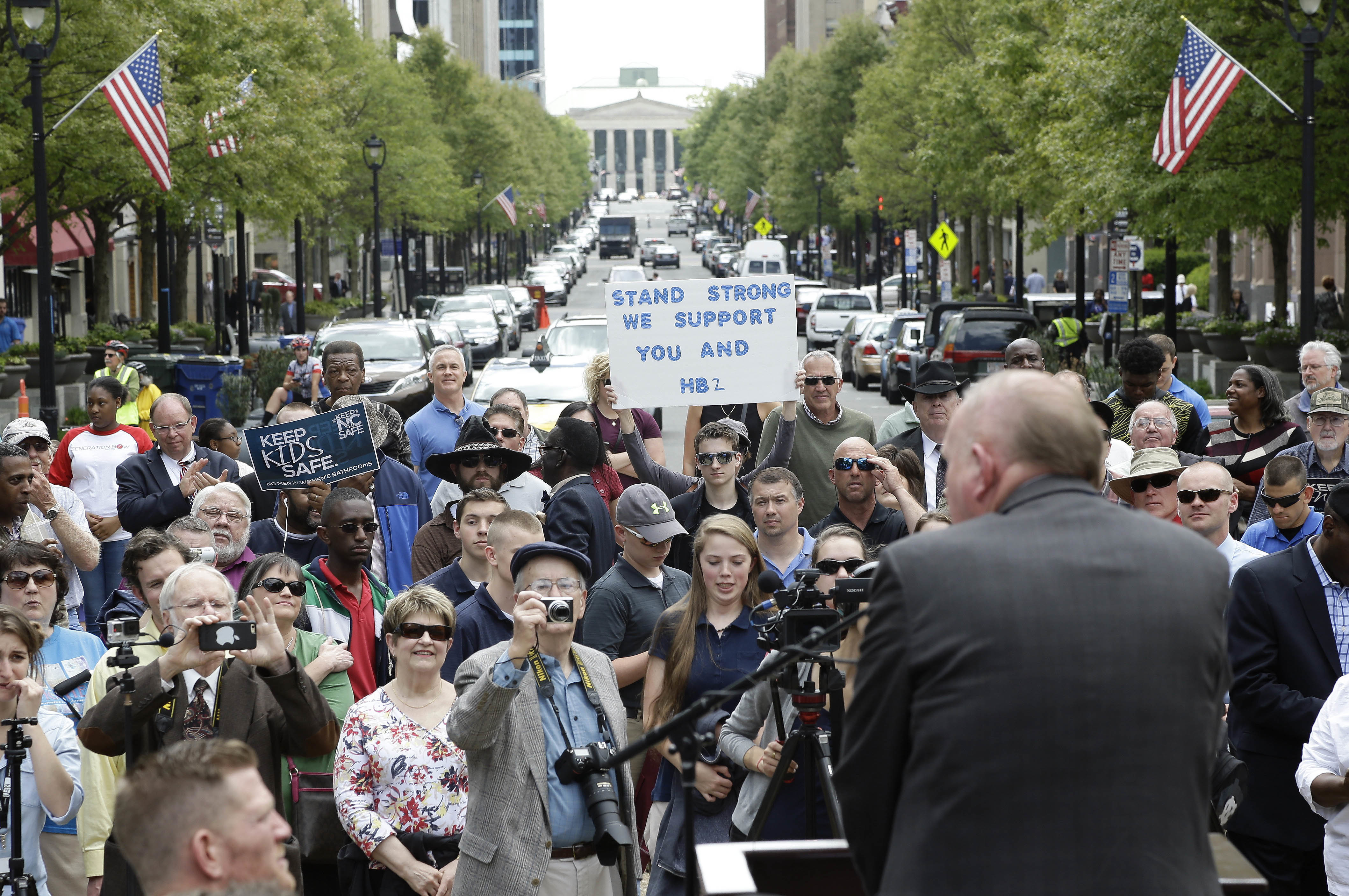 RALEIGH, N.C.-- Hundreds rallied Monday to defend aNorth Carolina law limiting protections for the LGBT community, using cheers and a booming public address system to drown out a smaller counter-protest across the street.

About 500 gathered on the grounds of the old Capitol in the largest demonstration yet by supporters of the law, seeking to strike back after more than two weeks of negative publicity along with condemnation from business leaders and other public figures.

Signs reading "No Men in Women's Bathrooms" highlighted a single provision of the multifaceted law that has served as a major rallying point for conservatives: a measure requiring transgender people to use the bathroom corresponding to the sex listed on their birth certificate.

Monday's rally at the Capitol by the "Keep NC Safe" Coalition comes while vocal national opposition to the law continues. CEOs are urging Gov. Pat McCrory and legislators to repeal it and Bruce Springsteen canceled his Greensboro concert this past Sunday because of it, CBS affiliate WNCN reported.

"Let's speak loud enough so they can all hear us," said John Rustin of the North Carolina Family Council, referring to the opposing protest across the street.

Rally attendee June House said she believes people should use the bathrooms and locker rooms corresponding with their gender at birth. The issue is important to the Fayetteville resident because she ran a fitness center before retiring and continues to swim frequently at another gym.

"When I come out of the shower, it's a semi-nude situation. I think modesty and safety are not what they should be if cross-dressers are in there," she said.

On a nearby sidewalk, nearly 100 people gathered in a counter protest, holding signs such as "Bigotry is Bad for Business" and chanting: "They are up there preaching hate! They do not represent our state!" The chants were overwhelmed by the larger group.

"It's a law that's hurt North Carolina as a whole," said Shane Thrapp to WNCN, who opposes House Bill 2. "It's hurt our brand, it's hurt our people, it's hurt our nature of who were are as loving, inclusive people."

The dueling demonstrations reflected a fervor that's expected to keep the debate stoked through the legislative session later this month -- and likely through fall elections that include a closely contested governor's race.

Opponents of the law including the Rev. William Barber, president of North Carolina's NAACP branch, have threatened civil disobedience when the legislative session starts on April 25 if the law isn't repealed. Those who support the law are also planning a rally outside the legislature that day, said Mark Creech of the Christian Action League.

Creech told the crowd at his rally that a "smear campaign" has been deployed against a law that protects small business owners who want to follow their religious beliefs.

"That smear campaign has resulted in unfounded criticism of the law," he said.

He said women and children must be protected from men who would use anti-discrimination measures as a pretense to enter the wrong restroom.

The state law was passed after Charlotte adopted a non-discrimination ordinance allowing transgender people to use public restrooms in line with their gender identity.

Dozens of business executives are urging Gov. Pat McCrory and legislators to repeal the state law.

At the counter-protest Monday, Angela Bridgman of Raleigh held a sign that said: "My birth certificate belongs in a safe-deposit box. NOT ON MY PERSON!"

Bridgman, a transgender woman, said she moved to North Carolina more than a year ago from Illinois, where she had her birth certificate updated with her female gender after an operation.

She rejected the argument about the state law protecting women from predators, saying instead it has "put a big bulls-eye on my back" that could subject her to violence.

Holding up an approximately 8"x11" copy of her birth certificate, she said: "Would you want to carry something this size in your wallet or purse?"