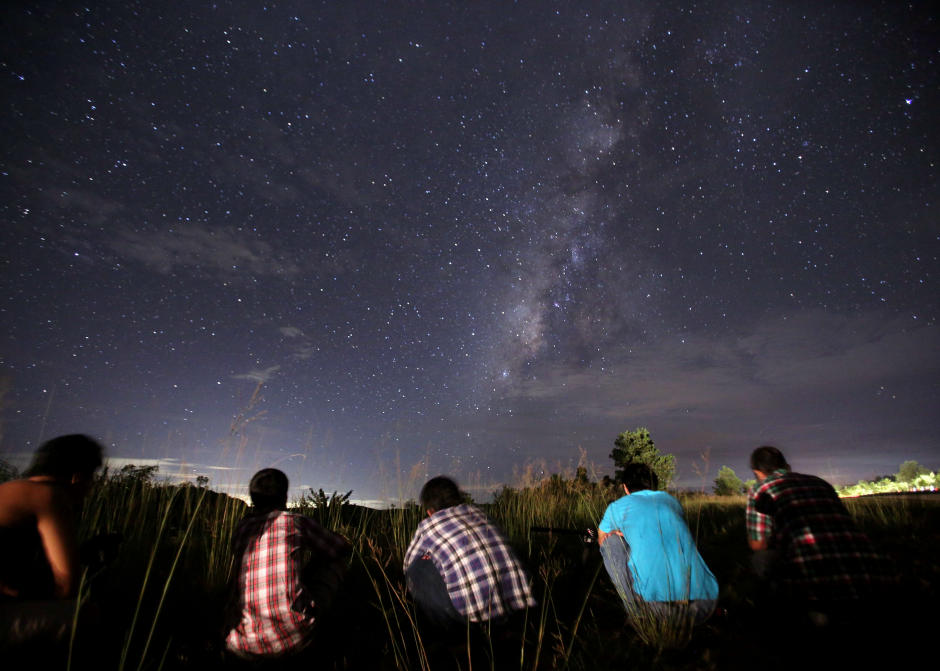 Many skywatchers love August because the ever-reliable Perseid meteor shower peaks mid-month, but unfortunately, this year's usually brilliant meteor display may be spoiled by a bright full moon.

The Perseid shower is expected to reach its peak at 8 p.m. EDT on August 12. The bright moon will rise the around 9:30 p.m. eastern time on Aug. 12 and 13, and shine brightly the rest of the night. To make matters worse, the full moon rising Sunday (Aug. 10) will be brighter than it usually is because this full moon, called a "supermoon," will be the closest of 2014.

Despite the bright, nearly full moon, stargazers should still be able to catch sight of some Perseid meteors. The best nights to look for Perseids will be this week rather than next. That's because the Moon will be setting earlier in the night, leaving a moonless pre-dawn sky to observe meteors. The meteors themselves will be less frequent, because it's well before their peak, but the darker moonless sky will make them easier to see. [The Perseid Meteor Shower: 10 Amazing Facts]

This is a compromise, but seems to be the best way to see the Perseids this year.

The moon's distance from the Earth varies slightly as it circles the Earth in its slightly elliptical orbit. At its closest, called "perigee," as on Sunday, the moon will appear slightly larger than average, though this difference is not visible to the naked eye.

However, the close moon does have an effect on the ocean tides, which are higher than normal on the day of perigee and the three days following. Like the seasons, the tides lag slightly behind what geometry would suggest.

How a meteor shower is made

You can actually see meteors any night of the year. Because of the Earth's motion around the Sun, they are more frequent after local midnight, 1 a.m. when daylight saving time is in effect. They are also more frequent when the Earth is passing through streams of debris left by the passage of a comet, a so-called meteor shower.

Earth passes through debris left behind by Comet 109P/Swift-Tuttle each year in mid-August, giving rise to the sometimes dazzling Perseid meteor shower, so named because the "shooting stars" appear appear to radiate from a the constellation Perseus.

Editor's Note: If you have an amazing night sky photo of the Perseid meteor shower or any other night sky view that you'd like to share for a possible story or image gallery, please contact managing editor Tariq Malik at spacephotos@space.com.

This article was provided to Space.com by Simulation Curriculum, the leader in space science curriculum solutions and the makers of Starry Night and SkySafari. Follow Starry Night on Twitter @StarryNightEdu. Follow us @Spacedotcom, Facebook and Google+. Original article on Space.com.

This is why you shouldn't leave soda in your car in the winter
View CBS News In
CBS News App Open
Chrome Safari Continue
Be the first to know
Get browser notifications for breaking news, live events, and exclusive reporting.