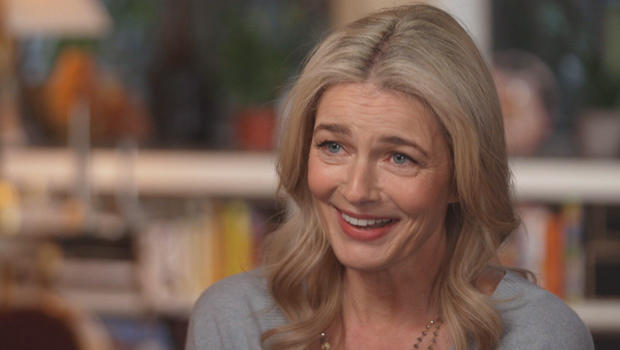 The face on this fashion shoot is likely familiar. Paulina Porizkova was a cover girl in the 1980s and '90s. Now, 54, the supermodel is on assignment again, as "Sunday Morning" witnessed for Harper's Bazaar

"It's true; I don't really love modeling," Porizkova replied. "But what it afforded me was the world."

She was just 17 when she made her first appearance in the Sports Illustrated swimsuit issue, in 1983. "That was about as big as you could get then," Mason said.

"And I didn't know. I thought it was a catalog for sportswear," Poriozkova laughed. "Once the issue came out, however, I got the significance of it pretty quickly."

She made the cover of the Swimsuit Issue the next year, and the year after. "In the '80s I was exotic because I was from an Eastern European country, and I had this story; I was a refugee. And it sort of catapulted me into the big time."

Paulina Porizkova was born in Czechoslovakia. After the Soviet-led invasion in 1968, her parents fled to Sweden; Paulina, then three, was left behind in her grandmother's care. It was nearly seven years before she was reunited with her parents.

At 15, she moved to Paris to pursue a modeling career. "In some ways, I still think I'm waiting to be found an imposter," she laughed. "Even now!"

"After all this time? Why is that?" Mason asked.

"I always like to say about myself I am a woman of very high ego, but zero self-esteem. My parents left me when I was little. They left because they were escaping the communist regime. But I think being left, that sort of just stuck with me forever, that I'm really not that great. And as soon as you find out how not-great I am, you will also leave me."

But the covers kept coming, and in 1984, she was also asked to audition for a music video. "And I got the part, which was of 'The Girl,' in the video for a band called The Cars":

Mason said, "That ended up being a pretty big deal."

"That ended up being the rest of my life, yeah!" she laughed. "I met my husband. And it was pretty much love at first sight."

What about the age difference? "I loved the security of having a mate that was older and wiser," Porizkova said. "Rejection and loneliness were such traumatic specters in my life. And being with a man who possessed me, who fully possessed me, was really comforting."

They became an "It couple" of the Eighties. Ocasek and The Cars kept turning out hits, and Porizkova became the face of Estée Lauder; her $6 million-a-year contract was then the most lucrative in fashion history.

But now, nearly 55, she says the modeling shoots are much rarer: "I did one of my, 'Look at me. This is my face without makeup' [posts]. And I've never used botox or fillers. And this job that I was up for went, 'Oh, well, we can't use you then.'"

Mason asked, "How do you feel about that stuff?"

"We have, like, a weird period between, you're J-Lo looking fabulous and then Betty White. And there's kind of like a dead zone between the two. So, I'm trying to fill that dead zone!"

On Instagram in January, Porizkova posted a bare-faced selfie: "So this is what I really look like," she wrote, "just the real true me. Grief is certainly no beauty maker."

Her husband, Ric Ocasek, had just died last September. It was Porizkova who found him. "It was horrifying. It was the worst moment in my life," she said.

They had two sons together, but had been separated since 2017.

Mason asked, "You said the age difference became a problem?"

"Suddenly in our marriage it seemed like only one of us wanted to be married," Porizkova said, "and that was me! I just know that it's really hard to be married to somebody if you're the only one putting in all the work. And maybe it was age; maybe he just was tired. Maybe I was too – maybe I took too much energy to love. I don't know. It's possible."

"You were separated, but you still lived together?" Mason asked.

"Yeah. He was still the man that I loved and that I had grown up with. And I couldn't really imagine life without him."

She'd even accompanied Ocasek when The Cars were inducted into the Rock and Roll Hall of Fame in 2018. She wanted, she says, to stay friends: "Because I couldn't imagine not," she said, tearing up. "I didn't know how life would work that way."

They'd begun divorce proceedings when Ocasek died suddenly. But the real shock came when Porizkova, who says she put all of her modeling earnings into the marriage, learned she'd been cut out of her husband's will, along with two of his children from an earlier marriage: "It's made the grieving process really, really tricky. Because I would love to just be able to be sad and miss him, and not also feel this incredible hurt of his betrayal."

"Do you have any sense of why he would have gotten to that point?"

"So, you're not gonna get an answer to that question."

"I'm never gonna get an answer. And that sucks."

Paulina Porizkova says she is working her way through it, through the depression and the sorrow.

"So, where are you now, mentally?" Mason asked,

"Yesterday I was kind of having a nervous breakdown," she laughed. "And today I'm feeling a little bit stronger. And in a way, this is freeing me. It's really, really scary. I didn't necessarily want it. But this is what I got. And so, I have to learn how to use my wings now."