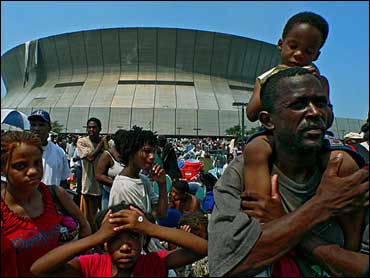 Evacuations from the Superdome have resumed.

Officials had turned their attention to the New Orleans Convention Center overnight, stopping the buses running from the Superdome.

The Texas Air Force National Guard estimates between 2,000 and 5,000 people still remained at the Superdome at mid-morning.

The crowd was orderly early this morning after being told that evacuations were temporarily stalled. Those remaining at the Superdome sat down to wait.

The scene also was calm today as the remaining evacuees patiently waited in five lines for their place on a bus.

Earlier, guard members said they were told only that the buses had stopped coming and to shut down the area where the vehicles were being loaded.

"We were rolling," Capt. Jean Clark said. "If the buses had kept coming, we would have this whole place cleaned out already or pretty close to it."

Guard members reported that the massive evacuation operation for the most part had gone smoothly Friday, coming after days of uncertainty, violence and despair.

Capt. John Pollard of the Texas Air Force National Guard said 20,000 people were in the dome when evacuation efforts began. That number swelled as people poured into the Superdome because they believed it was the best place to get a ride out of town.

He estimated Saturday morning that between 2,000 and 5,000 people were left at the Superdome. But it remained a mystery why the buses stopped coming to pick up refugees and shuttle them away.

Tina Miller, 47, had no shoes and cried with relief and exhaustion as she left the Superdome and walked toward a bus. "I never thought I'd make it. Oh, God, I thought I'd die in there. I've never been through anything this awful."

The arena's second-story concourse looked like a dump, with more than a foot of trash except in the occasional area where people were working to keep things as tidy as possible.

Bathrooms had no lights, making people afraid to enter, and the stench from backed-up toilets inside killed any inclination toward bravery.

"When we have to go to the bathroom we just get a box. That's all you can do now," said Sandra Jones of eastern New Orleans.

Her newborn baby was running a fever, and all the small children in her area had rashes, she said.

"This was the worst night of my life. We were really scared. We're getting no help. I know the military police are trying. But they're outnumbered," Jones said.

At one point Friday, the evacuation was interrupted briefly when school buses pulled up so some 700 guests and employees from the Hyatt Hotel could move to the head of the evacuation line, much to the amazement of those who had been crammed in the Superdome since last Sunday.

"How does this work? They (are) clean, they are dry, they get out ahead of us?" exclaimed Howard Blue, 22, who tried to get in their line. The National Guard blocked him as other guardsmen helped the well-dressed guests with their luggage.

The 700 had been trapped in the hotel, near the Superdome, but conditions were considerably cleaner, even without running water, than the unsanitary crush inside the dome. The Hyatt was severely damaged by the storm. Every pane of glass on the riverside wall was blown out.

Mayor Ray Nagin has used the hotel as a base since it sits across the street from city hall, and there were reports the hotel was cleared with priority to make room for police, firefighters and other officials.

Conditions in the Superdome remained unbearable even as the crowd shrank after buses ferried thousands to Houston a day earlier. Much of the medical staff that had been working in the "special needs" arena had been evacuated.

Dr. Kenneth Stephens Sr., head of the medical operations, said he was told they would be moved to help in other medical areas.

Those who wanted food were waiting in line for hours to get it, said Becky Larue, of Des Moines, Iowa.

Larue and her husband arrived in the area last week for a vacation but their hotel soon told them they had to leave and directed them to the Superdome. No directions were provided, she said.

"I'm really scared. I think people are going into a survival mode. I look for people to start injuring themselves just to get out of here," she said.

Larue said she was down to her last blood pressure pill and had no idea of when they'll get out or where to get help.

"They're going to get us out of here. It's just hard to hang on at this point," he said.

Janice Singleton, a worker at the Superdome, said she got stuck in the stadium when the storm hit. She said she was robbed of everything she had with her, including her shoes.

"They tore that dome apart," she said sadly. "They tore it down. They taking everything out of there they can take."

Then she said, "I don't want to go to no Astrodome. I've been domed almost to death."