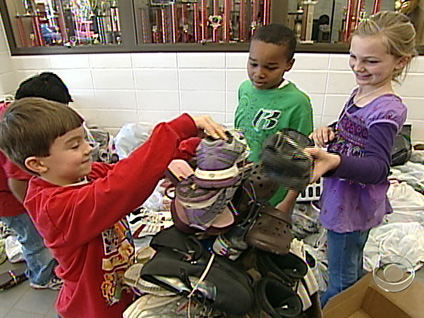 It's been 60 years since Dr. Alexander Fleming discovered a drug called penicillin, the first antibiotic.

Since then, doctors have prescribed the drugs to cure everything from pneumonia to scarlet fever.

But now, scientists are sounding the alarm that we have been overusing antibiotics - and that the germs have figured out ways to become resistant to them. Correspondent Lesley Stahl reports.

Infections we thought we had conquered once and for all are coming back because of a new breed of germs that doctors call "superbugs" -- bacteria that are resistant to almost all antibiotics.

The latest culprit is called MRSA, a staph bacteria that triggers infections so virulent they can - and have - turned deadly within days.

The first doctor in the country to identify MRSA in patients that weren't already very sick in the hospital was Dr. Robert Daum, head of infectious diseases at the University of Chicago Children's Hospital.

"What we noticed that was so different was we were seeing perfectly healthy children come in with serious, severe infections and they were this kind of resistant staph," says Daum. "And we said, 'What's going on here?'"

Apparently, this new "superbug," MRSA, was suddenly causing pneumonias and serious bone and skin infections so toxic that children were dying because of a lack of an effective antibiotic.

Daum says that if you had brought your child to the doctor with any of those infections two years ago, an antibiotic that belonged to the penicillin group of antibiotics would be prescribed. We can't do that anymore. We've abandoned that approach," says Daum. "All of these cillins, cephalosporin antibiotics – gone."

Daum says it isn't hopeless, that MRSA may not be resistant to every single antibiotic out there, but "we're needing to resort to unusual and often very, very expensive, hard-to-find, new treatments."

This new MRSA seems to be hitting people who are in close physical contact: children in day care centers, prisoners in jails, and athletes on sports teams.

Two of the NFL's Miami Dolphins were hospitalized with MRSA last season. "A lot of athletes are playing with cuts in their skin. Or on Astroturf, which is like a rug and can burn, abrade your skin," says Daum. "Staph love it when we have a break in our skin. They just love. They say, "This is just what I need to get inside."

But even with estimates of more than 10,000 cases so far, doctors in many communities aren't recognizing MRSA. That's what happened with 13-year-old Nicholas Johnson of Stafford, Texas. After he was injured at football practice, his parents, Janet and Dale Johnson, took him to the pediatrician.

The Johnsons said Nicholas was diagnosed with a bad shoulder sprain, had his arm put in a sling and advised to take ibuprofen for pain. That was on Thursday. By Friday night, Nicholas was in the emergency room at Texas Children's Hospital. His temperature had spiked to 104.6 degrees.

Nicholas was given antibiotics and some pain medication, and his parents took him home. But the antibiotics didn't work. On Monday, when his elbows and knees swelled up, Nicholas was back to the hospital. His mother said he was in respiratory failure and needed to be put on a ventilator.

But after being given multiple antibiotics, Nicholas was able to fight off the MRSA infection that had spread through his whole body. The hospital report says: "It's a miracle he survived."

Now, Nicholas says can run as well as he used to. And he's also lost all of the hearing in his left ear. But otherwise, he's in great shape and loves to show off the scars from his three operations.

One of the lifesaving drugs that Nicholas got was a powerful antibiotic called vancomycin, which for years hospitals reserved as the drug of last resort. But now, vancomycin use is skyrocketing.

To explain why that's frightening, Daum showed Stahl petri dishes with different strains of staph. Various antibiotics killed the staph germs, except for the dish that contained MRSA. The only antibiotic that would kill these germs was vancomycin.

"So this strain is resistant to everything except the antibiotic of last resort," says Daum.

But as vancomycin becomes the antibiotic of first choice, the bugs are learning to defeat it.

Two cases of vancomycin-resistant MRSA have been reported, and Daum says there would be a major medical crisis if that strain were to spread.

Meanwhile, other bacterial diseases like tuberculosis, gonorrhea and pneumonia are emerging in more dangerous, drug-resistant forms. And, childhood ear infections are far more difficult to treat.

While we can't stop the bacteria from trying to outwit antibiotics, health officials say a dramatic cut in their use could help reverse the tide. That means doctors will have to stop writing, and patients will have to stop demanding, the 130 million prescriptions for antibiotics that are given out each year. Half of them are given to treat illnesses like the common cold that the drugs have no effect on.

The U.S. government started a public education campaign last fall, with a recommendation for pediatricians and parents: No antibiotics for most childhood ear infections. But even though most of those infections go away on their own, parents may not stand for that.

Dr. William Schaffner, head of preventive medicine at Vanderbilt Medical Center in Nashville, says it may be hard to persuade doctors to be tougher with patients who want antibiotics: "It's easier to say than it is to do -- particularly when for a long time, you really thought that there would be a new antibiotic down the pike, and if this one doesn't work, we'll just use the next one."

But Schaffner says the next antibiotic may not be just down the pike. A majority of the major pharmaceutical companies are cutting back on antibiotic research or withdrawing altogether.

"For example, in the year 2002, something like 400 new pharmaceutical agents were licensed by the FDA," says Schaffner. "In that year, there were no genuinely new antibiotics among them. I mean, that's a striking thing. Last year, there were one or two."

Why is this happening? Well, one reason is that antibiotics are usually taken for just about two weeks, and therefore are not nearly as profitable as drugs people take for years, like Lipitor for cholesterol or Viagra.

"If I were the CEO of a pharmaceutical firm, I would point out that our research is benefiting the health of the public," says Schaffner. "A lipid-lowering drug reduces heart attacks. But how can I responsibly invest my shareholders' money -- $900 million to create a new antibiotic? … Those are the estimates. That's not fair to the shareholders."

It takes almost a billion dollars these days to research and test a new drug for FDA approval. The world's largest pharmaceutical company, Pfizer, maker of Lipitor and Viagra, is one of the companies still working to come up with new antibiotics.

Dr. Martin MacKay is Pfizer's head of drug research: "Of 100 ideas that we think of in our laboratories, only one will make it into medicine, so it's a huge risk."

The company's latest antibiotic, Zyvox, was developed specifically for the treatment of MRSA. But just four years after its release, resistance is emerging.

How long is it likely to take before the medication will be available for use? "When we have an idea for a new medicine, just to get into humans could take five years," says MacKay. "And then, the clinical trials after that can be another 10 years. So this is a 15-year process."

So don't hold your breath for a stream of new antibiotics in the near future, even from companies like Pfizer.

But are these companies obligated to produce more? "I don't think there's any more obligation that the companies have to produce new antibiotics than Ford does to produce a small car that's gas efficient," says Schaffner. "I mean, we would need to think outside the box."

Thinking outside the box, however, could cost the U.S. taxpayer, and there are suggestions that the government may actually pay the drug companies to develop new antibiotics.

Dr. Anthony Fauci, head of the government's Institute of Allergy and Infectious Diseases, says that idea is being taken seriously. But it's going to be difficult to convince the public to help the pharmaceutical companies. "It is no question going to be hard to sell," says Fauci.

One idea is to extend the patents on billion-dollar drugs like Zoloft or Zithromax, if those extra profits are ploughed back into antibiotic research. But the medical community prefers another solution, one similar to President Bush's proposal called Bioshield, which would give the drug companies $6 billion outright to come up with new anti-toxins in case of a bio-terror attack.

"If the Bioshield concept is developing incentives for companies to get involved, we definitely should do it," says Fauci. "We are engaging them right now."

In fact, they've been engaged in discussions with the drug companies for the past four years about developing new antibiotics. So far, no solution has emerged, and infectious disease doctors say we're running out of time.

"The antibiotic era is really only 60 years old, but as we get more and more resistance going on, it acts more and more like the pre-antibiotic era," says Daum. "It's a little bit of a doomsday and over-dramatic message to say, 'Well, we're going back to that.' But in many ways, we are."