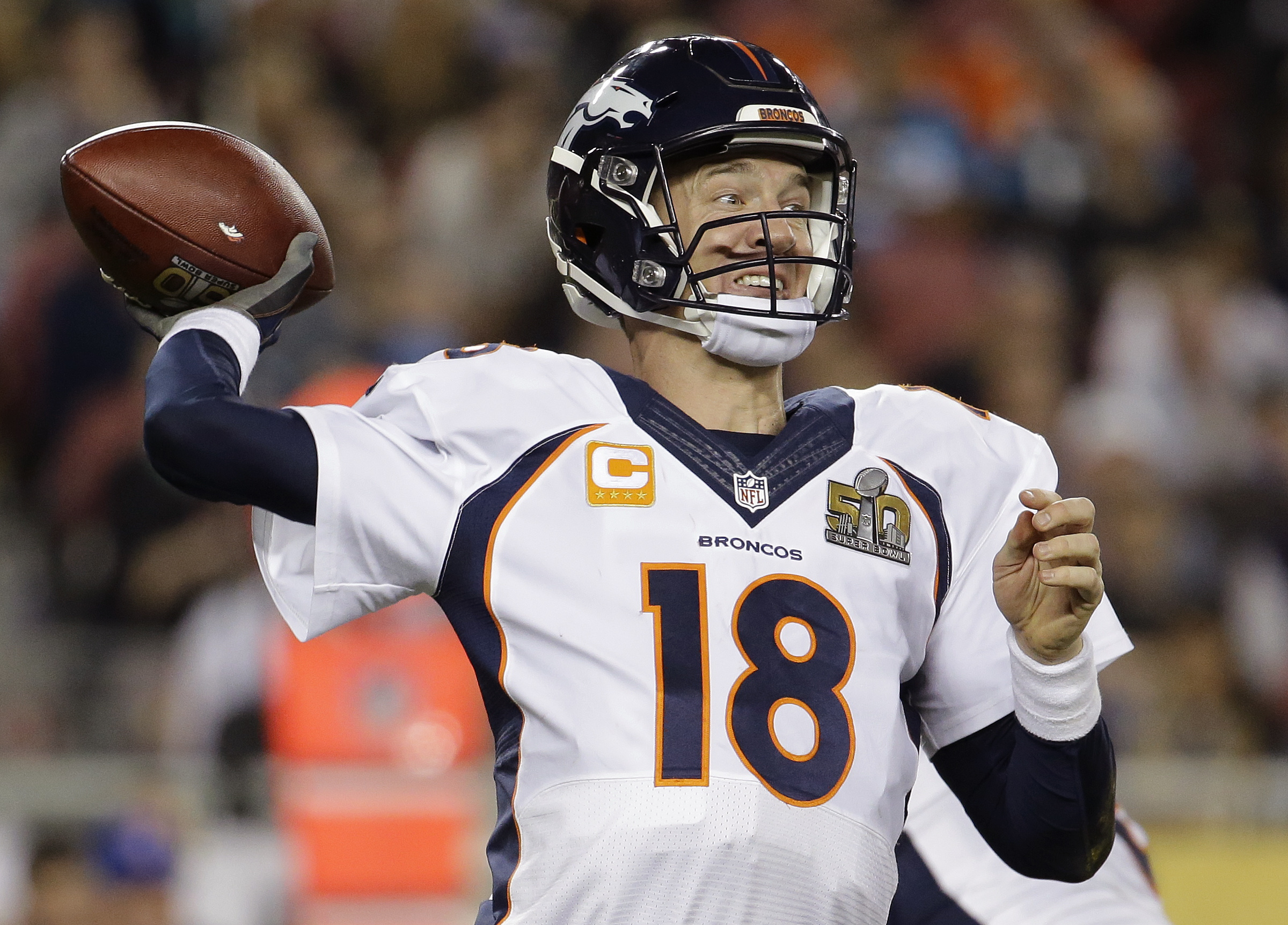 SAN FRANCISCO -- - If this was the final game of his magnificent career, what a Super way to go out for Peyton Manning.

He can thank Von Miller and the Broncos' swarming, big-play defense for his second NFL championship.

Adding that ring to his five MVP awards, Manning certainly can be satisfied and comfortable in retirement should Sunday's 24-10 victory over the Carolina Panthers be his finale. He wasn't the star -- game MVP Miller seemingly was everywhere on every Carolina play -- but Manning really hasn't been the headliner in this injury-shortened season.

Emulating his Broncos boss, John Elway, the 39-year-old Manning can ride off with the Lombardi Trophy after leading Denver to its third NFL title, first since 1999 -- when Elway was the quarterback.

"I'll take some time to reflect," Manning said when asked if Super Bowl 50 is the end. "I got a couple priorities first. I'm going to go kiss my wife and my kids. ... I'm going to drink a lot of Budweiser tonight. Take care of those things first."

Denver's suffocating defense kept Cam Newton jittery all day. Despite wearing gold shoes before the golden Super Bowl, Newton couldn't finish off a dynamic season in which he was the league's MVP. Miller twice stripped him, once for a touchdown, the second time setting up a clinching TD. Denver's top-ranked defense, the one that ran roughshod over Tom Brady in the NFC championship, simply wouldn't let Newton get comfortable.

"It's every one of these guys who go me to this," Miller said.

Newton was sacked six times -- receiver Ted Ginn Jr., went down once on an aborted trick play -- and if Miller wasn't torturing him, DeMarcus Ware was. Ware had two of the seven sacks, the most ever by one team in the Super Bowl.

Carolina's potent offense that led the league with 500 points was held to its fewest points of the year, and Denver set an ignominious mark with 194 yards gained, the fewest for a Super Bowl winner.

So what: The Broncos (15-4) are champions and Manning is the first quarterback to win Super Bowls with two franchises, Indianapolis in 2007 was the other.

Manning finished 13 for 23 for 141 yards against a strong Carolina (17-2) defense that just couldn't match Miller and company.

"This game was much like this season has been, testing our toughness, our resiliency, our unselfishness," he said. "It's only fitting that it turned out that way."

"I feel very, very grateful. ... Obviously, it's very special to cap it off with a Super Bowl championship."

Fresh off being named the league's MVP, the Panthers fifth-year quarterback was stymied by an aggressive Denver Broncos defense in his first Super Bowl appearance on Sunday.

The 6-foot-5, 245-pound quarterback who scored 45 touchdowns during the regular season -- and five more in the playoffs -- failed to produce a TD running or throwing for the first time this season and the Panthers lost 24-10 in Super Bowl 50.

Newton didn't get much help from his offensive line which allowed a Super Bowl record-tying seven sacks, or his wide receivers, who dropped big passes at key times.

Newton spent much of the game under heavy duress as the Panthers were unable to handle the pressure of Von Miller and DeMarcus Ware on the edges. Miller had 2 1/2 sacks, including two strip-sacks against overmatched right tackle Mike Remmers that led to Denver's two touchdowns.

Denver's first touchdown came when Miller blew past Remmers and ripped the ball out of Newton's grasp. Malik Jackson recovered the ball in the end zone for a touchdown to put the Panthers in an early 10-0 hole they could never dig out of.

Eventually frustration began to set it.

With Carolina trailing by six late in the fourth quarter, Miller broke through again and knocked the ball from Newton's hands. With the ball rolling on the turf, Newton opted not to dive in the pile and the Broncos recovered at the Panthers 4 to set up C.J. Anderson's clinching TD run.

With less than three minutes remaining, Newton was knocked down in the end zone and screamed at an official looking for a late hit but didn't get one.

The question surrounding the Panthers all year long was whether their wide receivers would be good enough for Newton after Kelvin Benjamin went down with a season-ending knee injury in training camp.

Carolina still managed to finish No. 1 in the league in scoring this season, putting up 500 points in the regular season and 80 more in the postseason.

But a key drop by Jerricho Cotchery early came two plays before Newton's first fumble. Ted Ginn Jr. also had a ball go through his hands and into the awaiting arms of T.J. Ward for an interception that denied Carolina a scoring opportunity.

The Broncos neutralized tight end Greg Olsen and the Panthers lost Philly Brown to a concussion in the second half rendering their offense useless.

The Panthers could never establish a running game with Jonathan Stewart held to 29 yards on 12 carries and one touchdown run while battling through a foot injury.

While Super Bowl 50 is over, and the Denver Broncos are your champions, Super Bowl 51 is just 52 weeks away. According to William Hill Sports Book, the New England Patriots and Carolina Panthers are the two favorites to make it to the Super Bowl in 2017, reports CBS Sports.