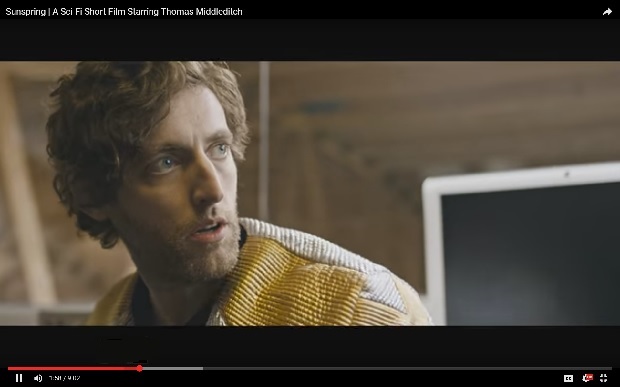 Filmmaker Oscar Sharp and his technologist collaborator Ross Goodwin wanted to build a machine that could write screenplays. They took hundreds of sci-fi TV and movie scripts, including "Jurassic Park," "Frankenstein" and "Minority Report," and fed them into an artificial intelligence Long Short-Term Memory (LTSM) neural network named Benjamin.

They provided the AI with some prompts to help it get started, such as the title "Sunspring," a setting in a future with mass unemployment where young people are forced to sell their blood, and an opening scene in which a man pulls a book from a shelf. Then it was up to the AI system to spin the rest of the story.

The resulting script was then filmed with the help of three actors, including Thomas Middleditch from HBO's "Silicon Valley," and edited into the weird, disjointed short film "Sunspring."

If you're looking for character development and a plot, this is not the movie for you.

Instead, "Sunspring," which is available on YouTube through the Ars Technica channel, showcases the potential -- and limitations -- of AI to imitate the storytelling art form while providing an absurd, laugh-out-loud thought experiment for all the world to enjoy.

You can watch the entire film below.

What do you share when you sign in with Facebook or Google?
Thanks for reading CBS NEWS.
Create your free account or log in
for more features.
View CBS News In
CBS News App Open
Chrome Safari Continue
Be the first to know
Get browser notifications for breaking news, live events, and exclusive reporting.