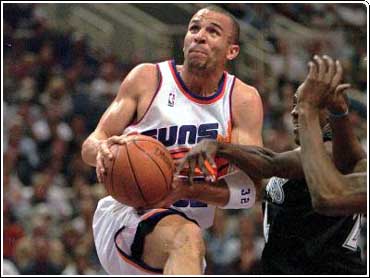 As goes Kevin Garnett, so go the Minnesota Timberwolves, and Thursday night Garnett was awful.

For 176 consecutive games, he has scored in double figures, the longest current streak in the NBA, but it almost ended in Phoenix.

Hounded by a tight, double-teaming defense led by Cliff Robinson, Garnett was just 5-for-21 from the field for a season-low 10 points night as the Suns handed the Timberwolves their second blowout loss in as many nights, 101-85.

"It's a terrible way to go into the break," Garnett said. "The best thing is, tomorrow's another day."

Garnett didn't reach double figures until 5:05 remained in the game and left for good shortly thereafter.

The Suns, who have won three in a row and six out of seven going into the All-Star break, had six players in double figures, including all five starters, but it was the defense that impressed Phoenix coach Scott Skiles.

With their players all back after a series of injuries, the Suns feel they're beginning to hit their stride.

"When Shawn came back you really saw it, because he brought an added dimension of rebounding, running and dunking the shots, getting the fans into the game," Hardaway said. "You hadn't seen a lot of that since he's been hurt."

Sam Mitchell scored 16 for Minnesota, which shot just 38 percent compared with the Suns' 49 percent. Malik Sealy scored 11, all in the first half.

The Timberwolves, beaten by the Lakers by 31 points Wednesday night in Los Angeles, were down in a hurry against Phoenix, too.

Minnesota cut the lead to 15 after both teams emptied their bench in the final minutes.

The Suns outscored the Timberwolves 30-6 during an 8 1/2-minute span in the first half.

The onslaught began when Phoenix made the last two baskets of the first quarter to go ahead 27-25 and didn't end until Robinson's two free throws made it 53-31 with 3:59 left in the half.

"The guy who really turned it up during that stretch was Jason," Skiles said. "He went through a three or four-minute span where he was all over the place. He made a couple of great offensive plays, he had a big block by the basket, he had a steal. When he turns it up like that, we all feed off of him."

Marion, in his second game back after missing 31 while recovering from arthroscopic knee surgery, scored 10 during the surge, including a one-handed tomahawk jam and a two-handed stuff on the fast-break. In just eight minutes on the court in the first half, Marion was 4-for-5 from the field and grabbed five rebounds.