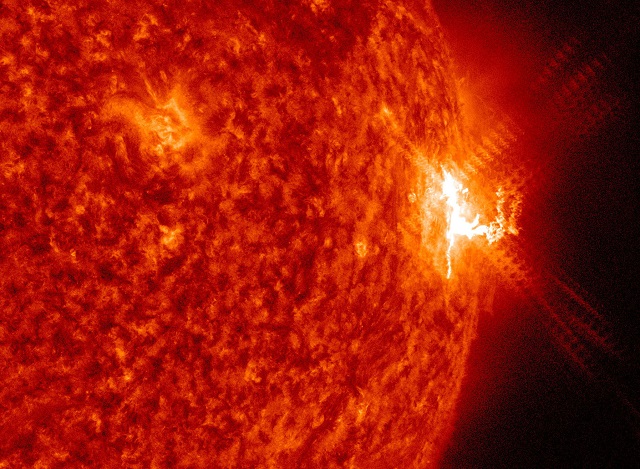 The sun fired off its strongest solar flare of 2016 during an active weekend that saw three eruptions from the star's surface.

The uptick in solar activity occurred overnight on Friday and Saturday (July 22 and 23) when the sun unleashed three relatively moderate solar flares, all of which were captured on video by NASA's Solar Dynamics Observatory. While all three were somewhat minor, they are the first substantial solar events in months, NASA officials said in a statement.

The M7.5 flare was the strongest sun storm of 2016, according to Spaceweather.com, a website that tracks space-weather events. But it was still nowhere near the most powerful types of flares the sun can unleash.

"These flares were classified as M-level flares. M-class flares are the category just below the most intense flares, X-class flares," NASA officials explained in their statement. "The number provides more information about its strength. An M2 is twice as intense as an M1, an M3 is three times as intense, etc."

When aimed directly at Earth, the strongest X-class solar flares can potentially pose a risk to astronauts in space, and may also disrupt GPS and communications-satellite signals.

"The sun is currently in a period of low activity, moving toward what's called solar minimum, when there are few to no solar eruptions. So these flares were the first large ones observed since April," NASA officials said. "They are categorized as midstrength flares, substantially less intense than the most powerful solar flares."