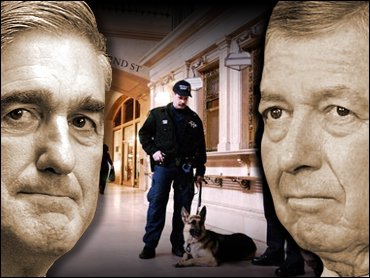 Intelligence that has heightened concern throughout the government indicates that a group of terrorists already deployed inside the United States is preparing to launch a major attack this summer, U.S. counterterrorism and law enforcement officials say.

The intelligence was described Tuesday by a senior counterterrorism official on condition of anonymity as extremely credible and backed by an unusually high level of corroboration.

The intelligence does not include a time, place or method of attack but is among the most disturbing received by the government since the al Qaeda attacks of Sept. 11, 2001, the official said.

"There is clearly a steady drumbeat of information that they are going to attack and hit us hard," the official said.

CBS News Chief White House Correspondent John Roberts
reports that Ashcroft and Mueller planned to distribute the names and photographs of several individuals they wish to question and detain. And the FBI was dispatching a bulletin to some 18,000 state and local law enforcement agencies warning of the threat.

Beginning with Saturday's dedication of the new World War II Memorial in Washington, the summer presents a number of high-profile targets in the United States. They include the G-8 summit in Georgia next month that will attract top officials from some of America's closest allies, plus the Democratic National Convention in Boston in July and the Republican National Convention in August in New York City.

CBS News Correspondent Thalia Assuras reports
there is also the possibility that terrorists will tie an attack to the November presidential election, emboldened by the political fallout from the march train bombings in Spain. That attack also highlighted al Qaeda's reliance on local groups motivated by the U.S.-led invasion of Iraq.

The FBI and Homeland Security Department also are concerned about so-called soft targets such as shopping malls anywhere in the United States that offer a far less protected environment than a political convention hall.

Of special concern, the counterterrorism official said, is the possibility that terrorists may possess and use a chemical, biological or radiological weapon that could cause much more damage and casualties than a conventional bomb.

While the government has worried for years that al Qaeda may try to get its hands on such weapons, CBS News has learned that it is a recent bomb plot in Saudi Arabia that has them truly worried. The plot illuminated a new tactic to attack large fortified public-like buildings.

Terrorists planned to use two truck bombs — one to blow up outside defenses, and a second to drive through the opening — and take down the building.

Despite the worries, the official said there was no immediate plan to raise the nation's terrorism threat level from yellow, or elevated, to orange, or high. The threat level has been at yellow — midpoint on the five-color scale — since January.

"You take those reporting streams and couple it with the number of high-profile events you will have between now and the end of the year," Homeland Security

Tom Ridge told the CBS News Early Show
. That analysis led his department "to bring together a variety of agencies together to see what we can do to accelerate the work we do every day to make us safer and more secure."

But Ridge made clear that Americans should feel safe traveling this summer.

"Americans' jobs is to go about living their lives as Americans," Ridge said. "We'll provide the security, they have to figure out how to have fun themselves."

New York Police Commissioner Raymond Kelly said city officials had not been advised that terrorists were plotting an attack there.

"We are receiving highly sensitive intelligence information on a regular basis, including today, and there is nothing in that reporting to indicate a specific threat or looming attack against New York City," Kelly said in a statement late Tuesday.

And a federal security official told CBS News Correspondent Bob Orr, "We know of no new specific highly credible intelligence suggesting an imminent attack … there's nothing we would characterize as an increase in the chatter level."

The FBI already has created a special task force that is focused solely on dealing with this summer's threat. The task force, whose existence until recently was classified, is intended to ensure that no valuable bits of information or intelligence fall through the cracks, as happened before the Sept. 11 attacks.

Other actions to be taken include new FBI interviews with people who may have provided valuable information in the past, distribution of photos of individuals sought for questioning and a fresh examination of older investigative leads to determine whether they might point to elements of the summer plot.

U.S. authorities have said repeatedly that al Qaeda is determined to mount an attack on U.S. soil, in part to announce to the world that it remains capable of doing so despite the money and effort that has gone into homeland security since the Sept. 11 attacks.

The official did not say how many suspected al Qaeda or other terrorist operatives are believed in the country, whether they made their way into the United States recently or have been here for some time. The FBI has warned in the past that Islamic extremist groups may attempt to recruit non-Middle Easterners or women for attacks because they would be less likely to arouse suspicion.

Special security attention already is being focused to the nation's rail, subway and bus lines. The FBI last week sent out an intelligence bulletin to law enforcement agencies urging vigilance against suicide bombers, who have been used by terror groups worldwide to devastating effect but not so far in the United States.