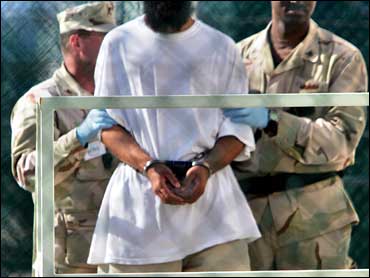 Religious leaders and doctors are weighing in on the subject of alleged torture of prisoners, following three suicides at Gitmo called "an act of asymmetical warfare" by a U.S. admiral, and a "p.r. move" by a U.S. diplomat.

Even though the Bush administration has said that it does not torture detainees and does not condone the torture of detainees, a group of religious leaders and other Americans – reportedly including former President Jimmy Carter – has taken out a full page ad in the New York Times denouncing any U.S. torture.

The American Medical Association is also out with a statement on the subject, making it clear that any doctors who participate in such activities are violating the code of medical ethics which they have sworn to uphold.

Two Saudis and one Yemeni hanged themselves Saturday, the first successful suicides at the base after dozens of attempts at Guantanamo Bay, the U.S. military prison in Cuba for terror suspects – many held for years after being arrested during the war in Afghanistan.

So far, only 10 detainees at Guantanamo Bay have been charged with crimes.

Military officials said the suicides were coordinated acts of

President Bush expressed "serious concern" Saturday over the suicides, which are under investigation.

Monday, the Bush administration distanced itself from the description of the suicides as a publicity stunt.

"I would just point out in public that we would not say that it was a P.R. stunt," said State Department spokesman Sean McCormack. "We have serious concerns anytime anybody takes their own life."

Colleen Graffy, deputy assistant U.S. secretary of state for public diplomacy, told the British Broadcasting Corp. that the deaths at the U.S.-run camp in Cuba were a "good P.R. move to draw attention."

Graffy also told the BBC the deaths were "a tactic to further the jihadi cause."

The remark is a setback for Graffy's boss, Undersecretary of State Karen Hughes, a longtime confidante of the president whose job is to improve the U.S. image in the Arab world. Hughes, a former White House communications adviser, heads an office at the State Department which monitors and quickly responds to inaccurate or distorted portrayals of U.S. views and actions in the Arab media.

Graffy's remarks were quickly picked up in the Arab press.

"Her comments quickly appeared to be bad P.R. moves for the U.S. administration," an article on the Web site of Lebanon's The Daily Star newspaper said.

Graffy is not the only U.S. official to have portrayed the suicides in a tactical light. Navy Rear Admiral Henry Harris, speaking to reporters in a weekend conference call, described the suicides as an "act of asymmetric warfare against us" and "not an act of desperation."

Harris, who is the camp commander at Guantanamo, also said detainees there "have no regard for human life, neither ours nor their own."

The EU said Monday that it plans to ask President Bush to shut down the prison at Gitmo. Mr. Bush has said he'd like to close it down, but is awaiting a U.S. Supreme Court decision on whether the detainees should get military or civilian trials. "We'd like it to be empty," the president said Friday. "There are some that, if put out on the streets, would create grave harm to American citizens and other citizens of the world. And therefore I believe they ought to be tried in courts here in the United States."

"The commander's statement is entirely inappropriate and is part of a pattern of official commentary on the presumed guilt of detainees who have never had an opportunity to challenge their detentions in a court of law," said Rob Freer, an Amnesty analyst.

The group said military authorities "have shown themselves to be oblivious to the psychological suffering of the detainees" and called for an independent, civilian investigation into the deaths.

It also urged America to give U.N. experts unrestricted access to Guantanamo and let them talk privately with detainees.

The International Red Cross said it hopes to visit the camp soon because of the suicides.

The Paris-based International Federation for Human Rights said it is shocked by the American officials' statements.

"These comments are shameful and revolting," said Sidiki Kaba, the federation's president, adding that the men must have been in deep despair to commit suicide, which is forbidden by Islam. "This official discourse, in the very least absurd, is a testament to the awkward position of American authorities, who are more and more isolated at the international level."

Britain's conservative Daily Mail newspaper said the officials had spoken "with utter insensitivity to world opinion" in an editorial headlined: "From the high moral ground to the gutter."

The Irish Independent newspaper criticized the detentions, but at the same time also said the suicides are "certainly... a propaganda coup."

Rene van der Linden, president of the Council of Europe's Parliamentary Assembly, said the detainees' deaths "show once again the terrible damage that is done by unlawful detention in this center, which exists to sidestep normal American justice."

In New York, a group of prominent religious leaders and other concerned Americans took out a full page ad in Tuesday's New York Times, saying "nothing less is at stake in the torture abuse crisis than the soul of our nation... Let America abolish torture now - without exceptions."

Another group whose voice is being heard – although the words "Guantanamo Bay" are not specifically mentioned - is the American Medical Association.

The AMA has issued new guidelines sharply limiting the involvement of doctors in prisoner interrogations and reminding physicians that while engaging in any activity relying on their medical knowledge, they are still obligated to uphold medical ethics.

The new policy adopted by delegates at the AMA's annual meeting states that "physicians in all circumstances must never be involved in activities that are physically or mentally coercive. If physicians engage in such activities, the whole profession is tainted."

The AMA says doctors "must not conduct, directly participate in, or monitor an interrogation with an intent to intervene, because this undermines the physician's role as healer."

A loophole appears to remain in the statement, whose purpose the AMA says is to assist physicians in the military who encounter such issues.

"Because it is justifiable for physicians to serve in roles that serve the public interest," says the doctors' group, "the AMA policy permits physicians to develop general interrogation strategies that are not coercive, but are humane and respect the rights of individuals."